4 Things You Shouldn't Do out of Loneliness this Holiday Season 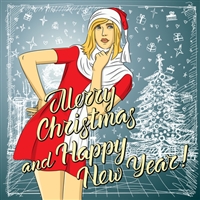 The holidays can be a lonely time if you're single and don't have much family around. You don't want to make bad decisions for this reason though. Here are four things you shouldn't do just because you're lonely this holiday season.

It will be tempting to contact people from your past when you get lonely, but it's a bad idea. Remember that you broke up with your exes for a reason. You might want to see a familiar face and spend time with someone you were once comfortable around, but if you know you ultimately don't want to be with this person, it's not fair to use them to keep yourself from being lonely. If you know someone has feelings for you, but you don't feel that same, it's better to steer clear of contacting them instead of getting their hopes up.

Just because you don't have a date, you shouldn't avoid accepting invitations to parties and other social gatherings. You never know who you might meet by attending them. Don't isolate yourself if you're already lonely. That is when it's most important to get out and surround yourself with people. If you're shy and feel awkward attending parties alone, remember that you probably know at least a few people who will also be attending. So while you may not have a date, you won't be alone. Don't assume that everyone else will be coupled up and talk yourself out of going. Gatherings are a great place to hang out with old friends and meet new ones.

3. Don't keep dating someone you're not into

If the holidays are approaching and you're dating someone you're unhappy with, don't use holiday loneliness as a reason to stay with them. If you're at the point in your relationship where you're ready to meet each other's families, doing so knowing the relationship won't last isn't fair to anyone. If you decide to stay with your partner through the holidays, make sure that you won't be miserable or resentful toward them. If you're going to stay, make it an enjoyable time. Being a little lonely is better than being unhappy.

4. Don't spend time too much time on social media

Loneliness during the holiday season may cause you to spend more time on social media looking at everyone's cheerful posts and photos. That is a bad idea as you may end up feeling even lonelier. It's also important to remember that people often post only the best moments. You won't hear anything about their arguments or see the 20 photos that didn't come out perfectly. If you find yourself spending too much time on social media and feeling more sad or bitter, it might be a good idea to limit your time or delete the apps entirely until the holidays are over.

The holidays can be difficult if you're feeling lonely, but there are things you should avoid doing in a weak moment that may have negative consequences.

Post Comment
More Articles
9 Signs Your Relationship is Over In the Minds of Men: The #1 Most Dreaded Question Ukrainian Easter Eggs How a Woman Can Tell if She is Dating an Emotionally Abusive Man To Social Distance or not To Social Distance - 4 Tips for Dating During the Pandemic How to stop comforting yourself with food More Articles
Staff Articles
Is your lack of self-esteem ruining your relationship? Fix it now! Love Addiction Sharing in Friendships Making Friends Online 8 First Date Red Flags Simple Strategies for Staying Motivated Age Difference in Relationships: Does it Matter? Creating a Positive Attitude Five Most Common Excuses We Feed Ourselves to Avoid Exercise Discover the real reason why he broke up with you Are online friendships real Choosing The Singles Curse...Or Not 6 Safety Tips for Dating Online Does Your Partner Treat You Like a Child? 5 Signs of a Disaster Date 4 Things You Should Never Do On A First Date Does Your Relationship Feel Like an Emotional Trap? An Introduction to the Law of Attraction Guys Will Be Guys 5 Signs that Your Boyfriend Is Controlling You More Articles by Staff (585)

Create a Article
jagtom: "The British Tradition"(meet us in the forums)
All Articles Create Article My Articles Posters Comments