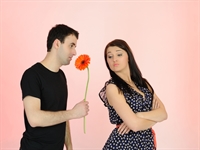 For some men, attracting women is a total mystery. Unsure of what to do, they remain friends with a woman for years when, secretly, they would like something more. It's perfectly normal to feel apprehensive about putting yourself out there. No one likes the sting of rejection. You will be less likely to get rejected by women if you change your mentality about pursuing them. Follow these four pieces of advice and you will start to attract more of the women you'd like to date.

There are many reasons a woman might not be interested in you, a good chunk of which are out of your control. Maybe she just got out of a bad relationship. She may be entering into a new relationship, and all of her attention is going to a new flame. Perhaps you're simply not her type. Though it is gut instinct for many to take the rejection personally, you shouldn't. She had a set of preferences, and you didn't quite match up. It's not an affront to your character. Pick yourself up and move on.

Reflect that you are a man of standards.

Of course, brushing off the hurt is easier said than done. One way to take that advice and let it empower you is to remember that you also have preferences! Think about what you would consider a great woman for you. Next time you're getting to know someone, think about whether she makes your cut. You shouldn't demean her, of course, but you should conduct the date with an attitude that reflects you're a man of standards. Many women will be impressed by the quiet confidence that comes through when a secure man knows what he wants.

Don't put her on a pedestal.

There is a difference between treating a lady with respect and fawning over her. If you lavish her with praise, she's more likely to put you on hold because she assumes, probably rightfully so, that you'll always be around. However, if you're a man who neither grovels nor belittles, she's more likely to be genuinely into you because you treat her as an equal. It's not a power play, just two people getting to know each other.

Some men befriend women they're interested in, and then keep up the guise of friendship for a long time. Eventually, the man spills his true feelings to the object of his desire and, more often than not, the female friend is left a little spooked. She has been thinking of the male friend in a platonic light, and then he suddenly drops his romantic intentions on her. It can be unnerving. Get around this issue by making your intentions known early on in your relationship. Suggest that you two grab some coffee, or check out a movie. Most women will understand immediately how you see her and, in little time, you'll know how she feels about you.

Dating can be a surprisingly complicated process. However, having a sense of who you are and what you want can take you a long way. If you take that attitude and then talk to women as equals, many will be impressed. When you find a lady that you think would be great for you, ask her to hang out one-on-one, even if it's somewhere casual. Most will know you're romantically interested, and the relationship can go from there if she feels the same way.

Post Comment
More Articles
Scary Events That Made It Seem Like the World Was Ending What is "Antique"? How to Spot a Lie 5 Things You Should Stop Doing In 2017 What Scares You? 25 Bizarre Phobias You Probably Never Knew Existed Are Online Degrees Credible? More Articles
Staff Articles
Age Difference in Relationships: Does it Matter? Creating a Positive Attitude Five Most Common Excuses We Feed Ourselves to Avoid Exercise Discover the real reason why he broke up with you Are online friendships real Choosing The Singles Curse...Or Not 6 Safety Tips for Dating Online Does Your Partner Treat You Like a Child? 5 Signs of a Disaster Date 4 Things You Should Never Do On A First Date Does Your Relationship Feel Like an Emotional Trap? An Introduction to the Law of Attraction Guys Will Be Guys 5 Signs that Your Boyfriend Is Controlling You 4 Ways to Get Yourself Motivated 5 Ways to Impress a Guy 7 Ways to Spice up your Relationship Staying Safe When Using Online Dating Services Positive Thinking Is the Best Medicine Does Your Boyfriend Take Advantage of You? More Articles by Staff (579)

Create a Article
president2525: "Cults, Lies, Bullshit and what's his name"(meet us in the USA forums)
All Articles Create Article My Articles Posters Comments