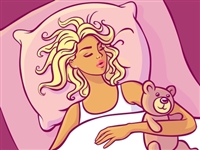 Goldilocks is a fairytale character that knew exactly what she wanted and went for it. If we could have seen her grow into a young lady, we would have seen her apply the same decisiveness used with the porridge, chair, and bed to her dating life. The patience to find the one that was "just right" would have surely helped Goldilocks find the right man.

Although we never heard what happened to Goldilocks after she met the three bears, we can assume she probably ended up happily ever after. The ending is easily deducible; not because of the typical fairytale ending, but because of Goldilocks drive to find the one that was "just right".

Isn't that what everyone is in search of? Someone that is just right. It isn't always so obvious when someone is a good match. Trial and error are hugely important to finding the right one. Goldilocks wasn't afraid to test the waters and neither should you.

She started with the porridge. She decided one was too hot, one too cold, and one was just right. So many people would have just settled and eaten the hot porridge, never trying the last. The same people settle in relationships, ending up with someone who has completely different interests, needs and desires; because they are afraid they will find no one better.

She moved on to the three chairs; the first and second were too big, but the third was just right, until it broke. Goldilocks was optimistic that there was something else good waiting if she was willing to look for it. Too many daters become impatient and ignore the thought that there is someone out there that is just right for them.

Finally, as she grew tired and made her way to the bedroom, she realized one bed was too hard, one too soft, and of course, the last was just right. Goldilocks understood the importance of patience and hope. She knew what she wanted, and was determined to have just that. Many singles don't even know what they are looking for in a partner. What would it hurt to wait until we found the one that was "just right"?

One can assume Goldilocks was courted by several suitors and patiently tried many of them out for fit and compatibility. Would it hurt to do the same now? People are so quick to jump into relationships for many reasons; loneliness, laziness, pressure or companionship. In a matter of time, whether it is weeks, months or years, the relationship falls apart just like the chair.

Of course it is easier to decide what temperature you prefer your porridge as opposed to all the complexities you want in a partner. But if you can apply the same type of decision making, patience and optimism to dating, why can't it be that easy?

Post Comment
More Articles
How to Banish Stress from Your Life: Instantly and Forever Why are men saying many women play mind games online???? Conquering Addiction Before It Conquers You Avoiding Work at Home Scams Do You Give Others Credit for Your Feelings? Nuclear Disarmament More Articles
Staff Articles
How to Approach Attractive Women: A Guy's Guide to Dating Hot Women 4 Great Things About Being Single on Valentine's Day How to Evaluate a New Dating Site How to Have Successful Relationships Across Cultures Is your lack of self-esteem ruining your relationship? Fix it now! Love Addiction Sharing in Friendships Making Friends Online 8 First Date Red Flags Simple Strategies for Staying Motivated Age Difference in Relationships: Does it Matter? Creating a Positive Attitude Five Most Common Excuses We Feed Ourselves to Avoid Exercise Discover the real reason why he broke up with you Are online friendships real Choosing The Singles Curse...Or Not 6 Safety Tips for Dating Online Does Your Partner Treat You Like a Child? 5 Signs of a Disaster Date 4 Things You Should Never Do On A First Date More Articles by Staff (589)

Create a Article
Gentlejim: "Which picture displays best?"(meet us in the profile reviews)
All Articles Create Article My Articles Posters Comments