5 Sayings Most People Get Wrong 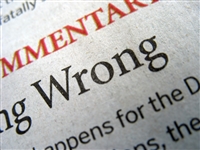 There are five sayings that too many people are guilty of misquoting. Some of these sayings are said incorrectly so frequently that the wrong versions are gaining more popularity and acceptance than the originals. While language is a changing and evolving thing, unfortunately many of the new versions make little sense. It's a good idea to know the correct ones, so that you aren't caught unprepared in an embarrassing, misquoting situation. So whether you use them, share them, or entirely disregard them, knowing the true sayings never hurt anyone.

I could care less

The first saying on the list is "I could care less."While there are probably a million things you could care less about, the actual saying goes "I couldn't care less."Though the difference in structure is minute, the difference in meaning is vast. There is the possibility of a miscommunication with this one, but more importantly the first just doesn't make sense in the context it's said. You say "I couldn't care less"to imply that the situation is something to which you are thoroughly indifferent. The misquotation intimates quite the opposite.

one in the same

nip it in the butt

The third saying is the ever-present "nip it in the butt."Now, obviously biting someone in the posterior would probably halt unwanted behavior, but the actual saying is "nip it in the bud."Nipping something while it's a bud means that it cannot grow into something more offensive. You cut the annoyance before it develops into a much larger problem. Unless you actually want to find the butt of a problem and bite it, perhaps it's a good idea to start saying "bud." Furthermore, it's just more polite to refrain from talking about behinds!

with all intensive purposes

you've got another thing coming

So there you have it. Five sayings have now been clarified, so do with them what you will. You can now go out into the world proclaiming the true statements, secure in your knowledge that the correct words are spilling from your lips. And if someone thinks to correct your strange words, you can proudly point out their own misinformation. So loudly declare that someone has "another think coming"or that you "couldn't care less."Spread your knowledge wisely and use your powers for good.

and the message should have been. send reinforcements were going to advance

lauhinglady•Dec 14, 2019•Pretoria, Gauteng South Africa
Interesting ...but I csnt believe people get them wrong ...We had such Excellent schooling in Rhodesia that although English was not my home language ..I got distinctions for GCE O levels.
I guess the Mugabe standards took a nosedive after I left to live in South Àfrica.
But my heartfelt thanks to all my amazing teachers in Que Que Schools in Rhodesia .
REGARDS TO ALL EX RHODESIANS AND MERRY CHRISTMAS TO ALL ON CONNECTING SINGLES
REGARDS
SUE SMALLMAN nee STRAUSS

Tamodan56•May 21, 2014•Tanarindo, Guanacaste Costa Rica
Did not know the last one, never used it but might now.

I got them all right. Yes it`s very easily (easy)

to confuse these (those) sayings.

SASingleGuy•Apr 7, 2013•San Antonio, Texas USA
Actually number four is an antiquated legal term. When you sold or leased land to someone you could (and still can if you own all rights including water, mineral, etc.) sell or lease them all the land, or for specific intents and purposes. In this context intents and purposes are different things. If you only leased with a specific intent you may only use it for that purpose. If you leased for all intents and purposes, however, you may use it for the specific intent stated in the contract and for any other legal purpose. You may be liable, however, if you used the land in such a way that diminished the value of the land if that use was not stated in the specific intent of the contract. The term is really not used anymore since land contracts are small books and every eventuality is accounted for in the terms of the contract.

Catfoot•Apr 6, 2013•Around here, Western Cape South Africa
Hmm, the first four I use correctly, but the last I cannot recall ever having used it. But I would have been wrong! I will try to imlement this correctly if I get to use it. Thanks!

drankhei•Apr 5, 2013•Canton, Illinois USA
Wow, that was interesting to learn i've been messing those up for years. I am no longer a tard now-thank you!

Money is the root of all evil Misquoted Dickens

'For the love of money is the root of all evil: which while some coveted after, they have erred from the faith, and pierced themselves through with many sorrows.'

Dickenes said the Love of money.

In March 1968, Andy Warhol stated, “In the future, everyone will be world-famous for 15 minutes."
According to Benjamin H.D. Buchloh, when Warhol made the statement, he was referring to the chain of command that allowed only certain people to be recognized. Warhol was envisioning the day when the chain would not exist and this broken chain would allow everybody an equal chance at fame.
-think about social media and I believe he is right - visionalry and a stirrer

jonnt•Apr 1, 2010•Lost in the Woods, East Sussex, England UK
Would anybody dare go out in your company hoping to have a nice chilled out evening ,, i surrender , ooops must leave

catch up with you aggen

Sreich•Oct 13, 2009•Clermont Ferrand, Centre-Val de Loire France
The fourth saying should be "TO all intents and purposes".

Post Comment
More Articles
The Average Guy's Guide to Beautiful Women You Know It Will Never Work When… Do You Believe 2012 Is The End Of The World? ... 6 Texts You Shouldn’t Reply To 7 Positive Affirmations for a Happier Life Surprising Her with Dinner: Going Beyond Wieners & Beans More Articles
Staff Articles
Developing Your Hidden Intuitive Powers 8 Tips to Live a Life That Is Positive in Nature 5 Signs You're Not Ready for a Relationship Fight Depression: 10 Natural Ways to Weather the Storm Toxic Shame How to Cope with a Stubborn Child Ten Reasons a Man Should Cook The World of Dreams: Common Dream Themes Choosing Wedding Lingerie: How to Wow Your Groom on Your Wedding Night Identity Theft: How to Combat Phishing How to move on after a difficult break-up 4 Tips for Improving Your Dating Life Is Your Relationship Dysfunctional? Whittle Your Middle: 5 Strategies That Work How to Trust Again Supporting a Friend Who Is Grieving 10 Weird Trends of 2017 How to Tell if You're Dating an Alcoholic Good Reasons to Dump Your Man How to Avoid a Miserable Relationship More Articles by Staff (540)

Create a Article
Alex7: "Hello Darling ... "(meet us in the ecards)
All Articles Create Article My Articles Posters Comments