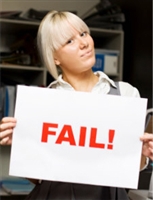 Read as this woman tells of her experience with her fear of rejection and how deeply it impacted her life. In a situation that began as an online-friendship turned online-romance, she tells how she eventually managed to conquer her fear and move on to open herself up to happiness.

Throughout my life, I had been a severely shy girl, and this shyness had managed to follow me into adulthood. While being described as attractive by many, I'd always been self-conscious and socially awkward. The only time I'd ever felt truly comfortable was around family or friends that I had known since childhood. When finding myself at a party or any other social setting surrounded primarily by strangers, I would shrink into the quietest corner possible and hope that it would be over soon. This, of course, managed to hinder my lovelife greatly. When a guy showed interest in me, I'd never been sure how to express whatever feelings I may or may not have for him in return. That's why, by my early twenties, I had yet to have a relationship. Even kissing was an anomaly for me.

One place I found myself able to express my feelings comfortably and securely was in front of my computer. Although some anxiety still remained, the internet allowed me to be myself without fear of humiliation. But when I learned just how many lonely people used the internet as an "escape" through lies and sudden emotional attachment, I was put off by it. Many online guys had professed their love for me, but I had no interest in hearing any of it. While I'll admit to the occasional "e-crush", I had never had any serious feelings for anyone I'd met on the internet.

It wasn't until I ran across one guy on a forum that I frequented that I began to get hit by the e-love bug. He was about 5 years my senior (which seemed like such a big number then ) and he had been in a serious relationship for nearly 5 years. At the time, his relationship didn't seem important because I refused to admit I had any sort of romantic feelings for him. Our first few conversations were brief and casual. He had an amazing sense of humor which I was immediately drawn to. In chatrooms with other members, he was often the center of attention, something that I secretly admired. But even still, this was just fleeting interest. It would be several months before true feelings would begin to take hold.

My first year of college was a nightmare for many different reasons. My financial situation was a disaster and, despite having spent seven years in a boarding school, I was not adjusting to the college experience as well as I'd hoped. One afternoon in the library (I couldn't afford my own computer at the time), a short and out of the blue conversation with the guy, whom I had not spoken to for awhile, brightened an otherwise dismal week. And from that day on, I found myself communicating with him nearly every day.

As the months passed, what was once mild interest grew into a full blown crush, one that I sometimes found myself very afraid of. After all, I was a girl who had never had much success or experience romantically. He was deeply involved, despite being deeply flirtatious. I just knew that nothing would ever come of it, but I couldn't help but wonder just what he really thought of me.

As fate would have it, MY horrible run at college ended rather quickly, just before HIS serious relationship was cut short. But "fate" was far from my thoughts. His apparent sadness did something to me that I can't quite describe. I felt truly sorry for HIM, despite not caring about his relationship to begin with. And at that moment I realized just how strong my feelings for him had become. But I made sure to keep these feelings to myself. How would he react? Of course he flirted... but he didn't really have feelings for me, did he? And besides, he just got out of a relationship. What could I possibly think would happen? And why would he ever want someone like me? I had so many questions and each one pulled me deeper into my shell than the last.

Throughout our small online circle, our friends began to speculate about what was going on between us. One close friend even commented that he knew this guy had feelings for me but would never admit to it, which I just thought was insane. Before I knew it, many months had gone by with constant communication and flirtation between the two of us. By then, we had graduated to phone conversations, but that was all it was. Instant messaging, texting, phoning. Even pictures between us were a rarity, and whenever they were sent, they only came from me.

At some point, we were able to verbalize our feelings for one another, but even this was somewhat subdued. While he only lived a state away, we did not see one another. In fact, it was barely discussed, and when it was, it was quickly forgotten. We had even reached the point of saying the "L word" to one another several times, but this changed nothing. And I was afraid to speak up about it.

I found myself becoming confused, and sometimes even depressed, wondering why he didn't want to see me. Why he at times seemed to care so much about me only to freeze up when the idea of it becoming even more real came up. I'd convinced myself that he'd just gotten so used to our flirtations that he'd allowed them to grow throughout the months without any real intent behind them. I knew that he hadn't remained without female companionship during the time we'd known each other. To me, he just didn't want mine.

At last, I began the true dating habits of someone my age, but my feelings for this guy had not changed. Before I knew it, a couple years had gone by. My feelings of rejection had escalated. I had never stopped to consider that I may not be the only person who felt this way. I had allowed so much time to go by as I cowered in fear, without noticing that he was in the same boat that I was. And we'd both failed to admit the core issue. We were BOTH afraid of rejection. Knowing that he had a deep understanding of much of what I'd been feeling eased so much of my burden. We shared it together, and that was what allowed us to finally overcome it.

More Articles
4 Ways To Stop Acting Like an Insecure Girlfriend Grace of God in personal life.... Single Men Over 50: 5 Ways to Find the Right Woman Six Unexpected Ways Girls Can Make Themselves More Attractive Can You Really Make Him Stay Faithful? Do’s and Don’ts of Safe Online Dating More Articles
Staff Articles
7 Online Dating Tips For Beginners 8 Strategies to Get You Through Being Dumped by Your Boyfriend Dating Pitfalls: Spotting a Gold Digger How To Avoid The Pain of First Date Rejection 4 Reasons You're Still Single What Makes Forgiveness So Difficult? Developing Your Hidden Intuitive Powers 8 Tips to Live a Life That Is Positive in Nature 5 Signs You're Not Ready for a Relationship Fight Depression: 10 Natural Ways to Weather the Storm Toxic Shame How to Cope with a Stubborn Child Ten Reasons a Man Should Cook The World of Dreams: Common Dream Themes Choosing Wedding Lingerie: How to Wow Your Groom on Your Wedding Night Identity Theft: How to Combat Phishing How to move on after a difficult break-up 4 Tips for Improving Your Dating Life Is Your Relationship Dysfunctional? Whittle Your Middle: 5 Strategies That Work More Articles by Staff (546)

Create a Article
Liamc: "What would we be like if we were to spend time together?"(meet us in the quizzes)
All Articles Create Article My Articles Posters Comments