The Telltale Signs of Projection 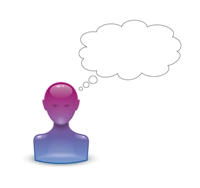 "Projection" is a term that many psychologists use to describe the manner in which we externalize our inner condition. In other words, when we project, we're blind to something that's going on inside us and instead we mistake it for something that seems to exist out there in the world. And projection is nearly always followed by a reaction.

What drives our tendency to project? The Swiss psychoanalyst Carl Jung wrote that what we're unwilling to face in the inner world, we'll meet in the outer world as "fate". What this suggests is that we project onto our environment when we don't want to feel something. For instance, imagine that you're upset, and have resolved to tamp it down and go into work with a smile on your face. When you get there, a co-worker makes a cutting – or maybe even just a careless – remark, and you react out of all proportion to the incident, with anger and bitterness. Maybe you seethe with resentment for the rest of the day, whenever you're around this person. What's happened is that you've projected on them, and therefore they seem to have caused you a lot of pain. But in reality, they merely triggered some pain that you'd already been carrying around but had not acknowledged.

Projection has a way of closing us down, of constricting the way in which we respond to other people and to our environment. Another sure sign that it has got us in its grip is if we feel emotionally agitated without provocation. Then again, it can be hard to tell; we might think we're being provoked. Projections usually have stories attached to them. Isolate one that runs through your head when you see a certain person – for instance, "she's disappointed in me", or "he just wants to sleep with me". Thoughts like these, particularly if they're habitual, and color our experience of the person, can indicate that projection is at work. Where does that story come from? Is it based in reality, or just assumption?

One of the surest ways to break a projection is to communicate about it, in an honest and transparent way, with the person who you've had the reaction with. "When you said that, I felt like you didn't want me around." This will be of two-fold benefit. Such an approach gives us the space to feel whatever is lying beneath the projection. In the example just mentioned, it might be fear, or a sense of unworthiness. Also, communication gives the other person the opportunity to either affirm or contradict the story that we've got running through our head about them. It can clear up a misunderstanding that never reflected the real situation in the first place – a misunderstanding that resulted from the way our view of life can be distorted by projection.

More Articles
Are You Alone Because You’re Too Picky? Are You a Turnoff? Fermented foods to strengthen your immune system Five Tips on How to Avoid Boring Other People relation 4 Signs Your Boyfriend Is Possessive Rather Than Jealous More Articles
Staff Articles
7 Online Dating Tips For Beginners 8 Strategies to Get You Through Being Dumped by Your Boyfriend Dating Pitfalls: Spotting a Gold Digger How To Avoid The Pain of First Date Rejection 4 Reasons You're Still Single What Makes Forgiveness So Difficult? Developing Your Hidden Intuitive Powers 8 Tips to Live a Life That Is Positive in Nature 5 Signs You're Not Ready for a Relationship Fight Depression: 10 Natural Ways to Weather the Storm Toxic Shame How to Cope with a Stubborn Child Ten Reasons a Man Should Cook The World of Dreams: Common Dream Themes Choosing Wedding Lingerie: How to Wow Your Groom on Your Wedding Night Identity Theft: How to Combat Phishing How to move on after a difficult break-up 4 Tips for Improving Your Dating Life Is Your Relationship Dysfunctional? Whittle Your Middle: 5 Strategies That Work More Articles by Staff (546)

Create a Article
Tanzila: "007"(meet us in the forums)
All Articles Create Article My Articles Posters Comments