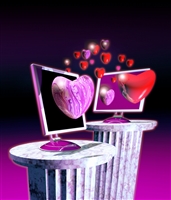 Pictures are worth a thousand words and a whole lot more when it comes to online dating. One third of American singles won't even respond to dating profiles that don't include a picture. Interestingly, only a very small percentage of online dating users concern themselves with hairstyle but 70% say that eyes are the sexiest facial feature.

In the opinions of singles in America, age may not be just a number. After a photo, a self-descriptive paragraph, and the potential date's geographical location, age is an important consideration when choosing a potential date.

It is agreed among American singles involved in online dating that money doesn't buy love. In fact, income rated just a half of a percentage point above eye color in the list of deal breakers. Drinking, political views, and religious affiliations were also listed as things that could cause you to be rejected but they are almost irrelevant. The two things that can cause you to go from possible soul mate to the recycle bin in just one click are your weight and having children. It appears that American singles would even tolerate a smoker before taking on an instant family.

American singles chose the education level of potential dates to be of more importance than the individual's racial background. Only 9.4% of singles in America said they would decline a date based on the individual's level of education and 8.9% said that the person's skin color was any issue.

The best things in life are worth waiting for.. and 60% of American singles are willing to wait six months or more to find a compatible date using an online dating service.

It is a common belief that when it comes to love and online dating, men have a deep seated case of commitment phobia. However, research shows that single ladies are far more likely to be searching for a friendship type relationship and men say they are looking for a long term relationship. When it comes to marriage, 13% of men say they are looking for marriage and only 8% of single ladies are marriage minded.

Most online daters believe that using an online dating service helps to extend their social circle quite dramatically and an incredible 64% agree that online dating offers a much broader range of potential dates than traditional dating.

What starts online doesn't necessarily stay online for very long. Most American singles will meet for a face-to-face date within a month after exchanging countless e-mail messages and at least ten telephone calls.

Nearly 7 million American singles have gone on dates with people they met through online dating sites and 17% of them have entered long term relationships or married their online dating partners after being introduced online.

online today!
sjena•Aug 7, 2015•orange, California USA
the half of American profiles are fake !

MrAngel•Oct 5, 2009•Chungli, Taipei Taiwan
I disagree about the eye colour,I think a woman's eyes can be an attracting facial feature but as to her eye colour...not important.This is really a non-issue anyway if you happen to live in regions where 99% of the people have brown eyes.

But this is an American article written for Americans.

As for..A picture is worth a thousand words..I agree.However,from experience I've learned that pictures can be deceiving and even web cams can omit the details you really want for a complete and accurate view of the person.My position is..The eye will never Lie.

So those thousand words that the proverbial picture can be worth can be efficiently reduced to 4 or 5 words in a personal meeting.As in.."She's what I want!".."She's not what I want"!Known within moments.So don't waste your time.Meet ASAP.Do you really want to spend weeks in communication to be disappointed in a minute of reality? I suggest,NO.

sweet_saucy2008•Sep 9, 2009•Northwest, Tennessee USA
I quite agree with the information in the article. Being a single woman who is raising a young granddaughter it is hard to even read a profile where a guy does not say no way or something just as harsh about kids.

I am not going to hide the position I am in because I feel like things will start on a false note. Honesty is very important in a relationship, so why hide my granddaughter. When I am put to the side because I have her I feel as though I don't need them either. It will take longer to finally meet someone, but with everything out in the open I don't have to be concerned that I will be canned for not disclosing my circumstances.

colleenbawn•Sep 7, 2009•A nice place, Michigan USA
So there is hope!

mandro21•Sep 3, 2009•Malden, Massachusetts USA
I am in a tough position... I am a single dad with custody of my daughter. I love her with all of my heart and she's my world, but because of "first impressions" I am reluctant to mention anything right away about her. Probably more confused. I know a good profile is a honest profile, but I won't mention my daughter until the ice is broken. And just as you say; "The two things that can cause you to go from possible soul mate to the recycle bin in just one click are your weight and having children. It appears that American singles would even tolerate a smoker before taking on an instant family." sadly is a reality with some people. I would like some feedback on this, because my most PROUD quaulity is raising my 13yr old girl myself and done so for 11 years!!

I am pretty young at 31, but I would never seek a replacement for her mother. I am confused as hell...

Any feedback would be awesome!

Stu138•Jun 29, 2009•Raymond Island, Victoria Australia
Speak for urself araya, you may be like that but that's no guarantee every guy is the same. No person is the same as another, regardless of gender. Hell, even identical twins arent always alike. FYI, I find eyes an important physical feature, and I may not be after marriage yet, but i have a mind that plans the future rather than living in the moment, which works for me. So Id be more certain of my choices of marriage or family that most guys my age. I dont want either right now but i plan on wanting it after age 25-26. Very few guys actually have the specifics down for that stuff. And ive also known women who werent partial to talking about marriage. The basis of anything social is that no one is the same. You see it as the way you wrote it. I see it differently. There are no doubt others who see it neither way, but their own. Keep looking and you find someone who is similar but rarely are they exactly like you. (And that doesnt work out because it becomes predictable and the spark quickly dies out due to boredom. Spontaneity is the key.)

arayapriest•Apr 9, 2009•Anaheim, California USA
not sure i believe everything in this article....especially about the marriage thing.....men are after sex, not marriage....and women are always the ones who bring up marriage....and women are also the ones who think eye color is important....no guy would give a shit what color eyes she has....i know this because i'm a guy.....anyway, just wanted to throw my $2 in....

arayapriest
Post Comment
More Articles
How To Date A Single Father Aristotelian Logic, Paradoxical Logic, and God Men: Questions to Ask Yourself If You Are Single and Unhappy About It Scam Profile Red Flags 4 Signs He’s Not Interested in You "Whose Thought is My Thought?" More Articles
Staff Articles
7 Online Dating Tips For Beginners 8 Strategies to Get You Through Being Dumped by Your Boyfriend Dating Pitfalls: Spotting a Gold Digger How To Avoid The Pain of First Date Rejection 4 Reasons You're Still Single What Makes Forgiveness So Difficult? Developing Your Hidden Intuitive Powers 8 Tips to Live a Life That Is Positive in Nature 5 Signs You're Not Ready for a Relationship Fight Depression: 10 Natural Ways to Weather the Storm Toxic Shame How to Cope with a Stubborn Child Ten Reasons a Man Should Cook The World of Dreams: Common Dream Themes Choosing Wedding Lingerie: How to Wow Your Groom on Your Wedding Night Identity Theft: How to Combat Phishing How to move on after a difficult break-up 4 Tips for Improving Your Dating Life Is Your Relationship Dysfunctional? Whittle Your Middle: 5 Strategies That Work More Articles by Staff (546)

Create a Article
CossackCat: "In The Year 2021"(meet us in the USA forums)
All Articles Create Article My Articles Posters Comments