The December Sprint- A Different Kind of New Year’s Resolution 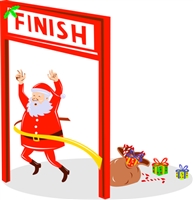 Some of us singles need a new strategy for approaching New Year's resolutions from a perspective of empowerment rather than defeat. The December Sprint is all about doing it right for one week before sitting down to plan the coming year. Attitude adjustment is the name of the game and it's easy to achieve.

In the next weeks, many of us will be busy devising a plan for the coming year and brainstorming for ways to beat the recession, save our friendships or relationships, and reclaim our girlish or boyish figures.

A special few will get a big jump on that annual ritual. They will be the few among us savvy enough to have run what some call the December Sprint.

There is no magic to strategizing for this race. It requires nothing more than making a to-do list consisting of all those chores we have been meaning to get done throughout the past few months, and then actually doing everything on the list in a week's time using that burst of energy and that surge of optimism that everybody else waits until January to open up to.

The December Sprint is all about doing things now, before last year's resolutions are nothing more than ironic history.

It means cleaning the closet. Donating the unused clothes to charity. Writing thank-you letters to best friends, best customers and best clients. In fact, it is a wise bet to write lots of thank-you letters. Do the favor you promised three months ago. Do the work you were paid for last week. Lose a pound. Call your mother. Change the oil in your car. Tip the guy you forgot to tip before Christmas.

Whatever you have been putting off really can be done in the little lull that always precedes New Year's Day. After all, you don't have to think about working hard for a whole year right now; you only have to floor the accelerator for six days.

Running the December Sprint will change everything. When January 1 rolls around, your neighbor will be resolving to change his sorry ways, while you will be resolving to do even better next week than you did the last and to do it again the week after that and the fifty one weeks after that as well. It's all about attitude and, as any behavioral scientist will tell you, attitude is everything.

So what if last year was a disaster? After you've run the December Sprint you can resolve to do just as well or even better in the future than you did in that amazingly gratifying last week of the year.

Last year, you just resolved to reform. This year, it will be all about keeping up the good work. Which one sounds more possible and more fun?

Post Comment
More Articles
5 Things You're Doing To Drive Him Away How To Stop Wasting Time And Money On Dating Six Unexpected Ways Girls Can Make Themselves More Attractive How to make Long distance relationships work Five Ways to Tell He’s Good in Bed Choosing Your Battles: How to Keep a Silly Argument From Derailing a Good Relationship More Articles
Staff Articles
Developing Your Hidden Intuitive Powers 8 Tips to Live a Life That Is Positive in Nature 5 Signs You're Not Ready for a Relationship Fight Depression: 10 Natural Ways to Weather the Storm Toxic Shame How to Cope with a Stubborn Child Ten Reasons a Man Should Cook The World of Dreams: Common Dream Themes Choosing Wedding Lingerie: How to Wow Your Groom on Your Wedding Night Identity Theft: How to Combat Phishing How to move on after a difficult break-up 4 Tips for Improving Your Dating Life Is Your Relationship Dysfunctional? Whittle Your Middle: 5 Strategies That Work How to Trust Again Supporting a Friend Who Is Grieving 10 Weird Trends of 2017 How to Tell if You're Dating an Alcoholic Good Reasons to Dump Your Man How to Avoid a Miserable Relationship More Articles by Staff (540)

Create a Article
namaron: ""UNDERSTANDING MAN"..(101)"(meet us in the blogs)
All Articles Create Article My Articles Posters Comments