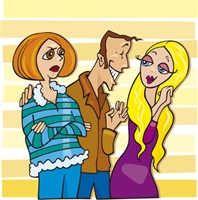 It's hard liking someone and not knowing if they like you back. Sometimes it's just hard to tell if a guy is interested or not. One minute he's stuck to you like glue and the next he seems to forget your name. Fortunately there are ways you can tell.. Here's a few signs that he (or she) is likely not interested in you as more than a pal.

1. You send him three texts before he replies

If he's not responding to a text, he probably has nothing to say. If you asked him a question or you were having a conversation and he's not replying, he's probably not interested. A guy who is interested in you will definitely reply and maybe even text you first.

A sure sign that a guy is interested in you is that he asks you out. He wouldn't do this if he weren't interested. You cango out, maybe at your suggestion, but you'll probably still wonder how he feels. If you really want to know, wait and give him time to do the asking. If he never does, you have your answer.

3. He blows you off for other people

You're talking to your crush when his friends arrive. Instead of talking as a group or telling them he'll meet them in a few, he ditches you to hang with them, or he constantly ends your phone calls to talk with others. It may not mean he's eager to get away from you, but he's certainly not eager to stick around.

4. You've never been invited to his place

You've been friends for a while and he's been to your place, but you've never even been invited to his. He could have something to hide or he simply doesn't want you there. A man who is interested in you will most certainly want you to come to his home.

If you've been wondering if someone is interested in you and they fall under any of these categories, he probably isn't interested.

Dess7717•Jun 6, 2013•Auckland, New Zealand
I should have read this article first, that should have saved myself from foolishness of life.

drclaw84•Sep 15, 2012•Melbourne, Victoria Australia
Re 1: Mobile networks will not guarantee instantaneous delivery of an SMS, network congestion will slow this down, and only to a mobile that is connected to the network.

pinklady1967•Aug 26, 2012•rockhampton, Queensland Australia
these comments are so true..

HuggerMan4U•Aug 25, 2012•Kent, Washington USA
1. I don't alwsys hear the phone ringing, and sometimes don't discover a text for one or two days later, when it's already too late to answer. Just because a text doesn't get answered is no reason he doesn't like you. In my case, chances are I'd love to be joined at the hip!

2. Some of us, me included, are way too shy to ask a woman for a date. Some of us aren't chasers, and have to rely on the woman to make the first move. Once a woman makes the first move, then it's easier for a guy to ask her out, because he knows basically where stands at that point.

3. If my friends called me when I was with my sweetie, I would tell them I would call them back later. If they approached us in person, I would politely tell them to buzz off and I might connect when I could. My sweetie comes first.

4. My place is basically a typical bachelor pad (even though I have others living here), with all that that entails. Example, a bit of mess here and there, not exactly presentable for company. If I visited her place and saw that it was immaculate and hospital-clean, I might be a bit intimidated. However, if she really wants to see my place, come on over and look the place over.
Post Comment
More Articles
4 Signs Your Boyfriend Is Financially Immature Man-Fixers: Women on a Mission 8 Tips to Live a Life That Is Positive in Nature 4 Ways to Get Yourself Motivated Clearing Your Web Browser Cache: When, Why and How BECOMING More Articles
Staff Articles
Are online friendships real Choosing The Singles Curse...Or Not 6 Safety Tips for Dating Online Does Your Partner Treat You Like a Child? 5 Signs of a Disaster Date 4 Things You Should Never Do On A First Date Does Your Relationship Feel Like an Emotional Trap? An Introduction to the Law of Attraction Guys Will Be Guys 5 Signs that Your Boyfriend Is Controlling You 4 Ways to Get Yourself Motivated 5 Ways to Impress a Guy 7 Ways to Spice up your Relationship Staying Safe When Using Online Dating Services Positive Thinking Is the Best Medicine Does Your Boyfriend Take Advantage of You? 4 Tips for Attracting Women Practical Exercises to Forgive Someone Who Won't Say Sorry How to Break Out of a Complacent Life The Rewards of Facing Our Pain and Fear More Articles by Staff (575)

Create a Article
Melody1671: "I love you, Venezuela..."(meet us in the puzzles)
All Articles Create Article My Articles Posters Comments