Signs a Guy Is Looking for More Than a Hook-Up 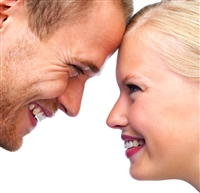 Dating can be complicated. It leaves a lot of people confused and, sometimes, really hurt. Some women find it difficult when dating to tell whether a guy is really into them, or whether he's just after something physical. These four telltale signs can help reveal whether a man is in it for a deep connection, or if he's just looking for a hook-up.

He compliments what you do, not just how you look.

Most men enjoy telling a woman how great they look. However, if they are really into a woman, they will also compliment her about all the little things she does that they love. Not only will they say that you're beautiful, they'll also praise you for things like your kindness, your humor, or your intelligence.

He tries to figure out what makes you tick.

If men are only interested in a superficial relationship, the conversations they carry tend to reflect that. They don't really try to get to know you; they may not even ask you questions at all, opting to talk about themselves nonstop instead. However, if they're in the company of a woman they are starting to develop serious feelings for, they want to learn about what makes her tick. So, if a guy is getting serious about you, they may ask questions about your past, your dreams for the future, and what things in the present bring you the most joy.

He invests time in you and he's reliable about it.

If a man is serious about a woman, he prioritizes his time so that she has a part of it. If he says he'll call, he does. If he makes plans with you, he doesn't flake. Even on especially hectic weeks, he'll make a serious effort to at least touch base with the special lady in his life. When crazy schedules are driving you two apart, he'll be proactive in making sure that you spend some quality time together.

He talks about the future.

Any conversation about the future can be a source of nervous conversation for many men. However, if a guy is serious about you, he starts to see you in his life down the road. He'll ask questions about what you'd like to accomplish in the next several years in an effort to see whether you are on the same page as him about the future.

Meeting a new romantic partner can be both emotionally draining and exhilarating. If you cross paths with a man who shows the signs above, there's a good chance you've landed a keeper. Enjoy getting to know each other. With a bit of luck and compatibility, you could be laying the foundation for a beautiful relationship.

wanderinglonely•Mar 31, 2020•BRISTOL, Bristol, England UK
I do find it enticing if my guy asks about the future it does indeed bode well if you really like him and want a long relationship.

Melody1671•Mar 3, 2020•Maracaibo, Zulia Venezuela
It's so nice to feel that special person makes time to even send a tiny message every day, just letting you know he thinks of you or he is looking forward to the day when you can spend time together... Each little detail really adds up...

Trinibeauty89•Jan 29, 2012•Port of Spain, Trinidad and Tobago
I couldn't agree more!
Post Comment
More Articles
Losing Religion How to Overcome Anger Romance Novels: Sexy & Sophisticated Reads How to fight spam What Makes Forgiveness So Difficult? Dress to Impress!... OMG, What should I wear? More Articles
Staff Articles
Is Loneliness Preferable to a Mismatched Marriage? An Honest Look at Getting Over a Relationship How to Banish Stress from Your Life: Instantly and Forever Differentiating Between Love and Lust How to Avoid Job Scams How to Control Jealousy in Dating Relationships 5 Traits of Charismatic People Internet Dating: An Online and Offline Safety Guide To Social Distance or not To Social Distance - 4 Tips for Dating During the Pandemic 7 Online Dating Tips For Beginners 8 Strategies to Get You Through Being Dumped by Your Boyfriend Dating Pitfalls: Spotting a Gold Digger How To Avoid The Pain of First Date Rejection 4 Reasons You're Still Single What Makes Forgiveness So Difficult? Developing Your Hidden Intuitive Powers 8 Tips to Live a Life That Is Positive in Nature 5 Signs You're Not Ready for a Relationship Fight Depression: 10 Natural Ways to Weather the Storm Toxic Shame More Articles by Staff (555)

Create a Article
paulson700: "Can you guess"(meet us in the quizzes)
All Articles Create Article My Articles Posters Comments