Why Do People Break Up on Valentine's Day? 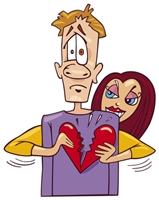 February 14 is touted as a day of romance, but the holiday has its dark side. The number of shattered relationships in the weeks leading up to Valentine's Day is unusually high. In addition, there are always those couples who wait for V-Day itself to cut the knot.

While Valentine's Day can be a fun excuse to spend time together as a couple, it can also be stressful. If partners don't communicate their expectations to each other, the holiday can be a minefield of disappointed hopes. Brian, 35, said he dreaded the weeks before Valentine's Day because his girlfriend dropped hints about the "big surprise" she expected. "I felt manipulated into outdoing myself every year," he said. "One year I told her I just wanted to spend time together. She thought I was joking, but when she realized I really hadn't gotten her anything, we had a huge fight."

When February rolls around, don't assume your partner is on the same page. A quick conversation ahead of time helps avoid hurt feelings and angry words.

While most intelligent adults understand the difference between real life and fantasy, hyped up media messages still worm their way into the subconscious. Sappy songs, happy-ever-after movies, and advertisements featuring impossibly beautiful people do more harm than good. "I broke up with my boyfriend on Valentine's Day, not because he didn't get me anything, but because I realized I wanted someone better," admitted Sandy, 27. "It was kind of a wake-up call."

While there's no point remaining in a relationship that doesn't meet your needs, be sure that you're evaluating your partner by realistic standards -- and not by Hollywood's.

Sad to say, Valentine's Day break-ups are often planned. Partners who feel duped or betrayed may choose to take revenge on their partners with a painful revelation. "I found out my partner had been cheating on me a week before Valentine's Day," said Myah, 28. "Instead of confronting her right away, I sent her a singing telegram at work breaking up with her. All her co-workers got to witness it."

While revenge may taste sweet in the moment, it's safe to say that very few relationships survive public humiliation of this kind. If you have any desire to save your relationship -- or your dignity -- a private conversation with your partner is more appropriate than V-Day drama.

The logic sounds bizarre, but it's not uncommon for relationships to drag on because one or the other partner is "waiting till after Valentine's Day" to break up. "Things had felt stale for me for a long time, but I couldn't bear the thought of David spending the holiday alone," said Corissa, 44. Her ex-boyfriend David had another viewpoint. "If she'd ended the relationship earlier, I might already have been with someone else by February. I think she just didn't want to be alone."

Waiting to break up until Valentine's Day is over is like putting a band-aid on a first-degree burn. You may cover the problem temporarily, but in the long-term, you'll just cause yourself -- and your partner -- more pain. Don't let a contrived Hallmark holiday control your relationships: do the right thing.

How Can You Avoid a Valentine's Day Break-Up?

Valentine's Day doesn't have to be an excuse to relive old arguments or create new ones. While not everyone likes this over-commercialized holiday, there's no reason to dramatize it with painful memories. Relax, hang onto your sense of humor...and don't say anything you'll regret.

This article makes me laugh, because it reminds me of one of my friends motto. He says, Valentine's Day, Birthday, and Christmas Day, are times to breakup. You don't have to worry about presents.

GuttentagEurope•Mar 27, 2014•Aabenraa, South Denmark Denmark
Because it is the most perfeckt day ,to brake up.

online now!
KIBALUV•Jul 4, 2013•Mu En Manor, North Carolina USA
I broke up after a Valentines date because my long-time partner showed up with a grocery store balloon & flowers. It was an insult to me. Not because it was cheap but because it wasn't something personal that required any real effort on his part. I felt he gave it to me out of obligation instead of real love.

montemonte•Jun 20, 2012•unknown, New Jersey USA
Guys break up the day before Valentine's Day when they are dating someone they aren't sure about. So they avoid spending the $$$$$$$ on a girl they might break up down the road. Cheap...Cheap...Cheap...
Post Comment
More Articles
Is He Mr. Right? Take This Relationship Test and Find Out Thinking about getting a tattoo? 4 Warning Signs That The Man You're Dating Might Be A Psychopath Tips on How to Flirt How To Get A Second Date With A Hot Girl Can Women Be Funny? More Articles
Staff Articles
Is your lack of self-esteem ruining your relationship? Fix it now! Love Addiction Sharing in Friendships Making Friends Online 8 First Date Red Flags Simple Strategies for Staying Motivated Age Difference in Relationships: Does it Matter? Creating a Positive Attitude Five Most Common Excuses We Feed Ourselves to Avoid Exercise Discover the real reason why he broke up with you Are online friendships real Choosing The Singles Curse...Or Not 6 Safety Tips for Dating Online Does Your Partner Treat You Like a Child? 5 Signs of a Disaster Date 4 Things You Should Never Do On A First Date Does Your Relationship Feel Like an Emotional Trap? An Introduction to the Law of Attraction Guys Will Be Guys 5 Signs that Your Boyfriend Is Controlling You More Articles by Staff (585)

Create a Article
Miss_Cellaneous: "Outside A Liquor Store #2"(meet us in the puzzles)
All Articles Create Article My Articles Posters Comments