8 Reasons Why He Hasn’t Responded to Your Text 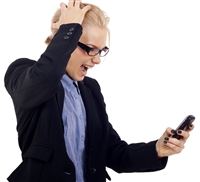 You texted a guy you like and he hasn't replied. If it's only been five minutes or an hour, there is no reason to worry yet. People don't always reply to texts as soon as they come in. Nevertheless, here are 8 common reasons why the guy you're interested in might not be texting you back.

1. You are bugging him

You sent him a text an hour ago and when he didn't reply within five minutes you texted him again. You still haven't heard anything, so you text him again every ten minutes to make sure he's okay. That's why he hasn't texted you back. You are impatient and won't stop bugging him until he answers. He's not going to answer if you're too needy.

This is a legitimate excuse. He might just be busy. He could have a life that you don't even know about. His work schedule may have changed or he started playing basketball in the evenings. Just because someone has a phone doesn't mean they are connected to it 24/7.

This is another legitimate excuse. If you reply to texts within milliseconds, he might decide to wait until later to reply and then he just forgets. The next time he texts you wait a while before you reply. Then when he gets your text he will be a little more interested in replying sooner.

A guy who is really, really into you will text you back. If he's not big on texting, he will call you. A guy who is interested in a girl will find a way to get in touch with her instead of making excuses.

6. He has a girlfriend

You met a great guy at a bar on Saturday night, but he isn't replying to your texts. He might have been enjoying a boy's night out and didn't intend to meet women. He probably already has a girlfriend and didn't want to be mean by denying you his number. Erase him from your contact list.

Texts are meant to be short and sweet. If you're sending long texts that are better suited for email, you'll probably not hear back from him. He probably doesn't want to read that long-winded text to begin with, but he'll want to reply to it even less because he knows you'll be expecting a similar response and that's not going to happen.

8. You are moving too fast for him

You just met him last month and you're already trying to schedule dates with him weeks from now. This will scare a guy off. If you want to keep his interest, you need to slow down. A guy doesn't want to think you're trying to rush him into a serious relationship before he's ready. Let HIM ask you out on dates.

Become a smarter texter and you might just hear back from the guy you like. If you need to beg him to answer your texts, realize he's not really into you and move on.

miniella•Dec 26, 2012•örebro, Orebro Sweden
Wow wow wow
how smarter i have suddenly become
The text is really inspiring thanks a lot

indahlestari•May 29, 2012•Jakarta, Indonesia
I love to read this article, it makes me smarter to realize if the man who meet me is into me or not. Thank you.
More Articles
Men: Questions to Ask Yourself If You Are Single and Unhappy About It The Danger in Dating a Control Freak Outdated Make-Up Habits Ants of Saudi Arabia Laws Of Life and Death The Play Book More Articles
Staff Articles
7 Online Dating Tips For Beginners 8 Strategies to Get You Through Being Dumped by Your Boyfriend Dating Pitfalls: Spotting a Gold Digger How To Avoid The Pain of First Date Rejection 4 Reasons You're Still Single What Makes Forgiveness So Difficult? Developing Your Hidden Intuitive Powers 8 Tips to Live a Life That Is Positive in Nature 5 Signs You're Not Ready for a Relationship Fight Depression: 10 Natural Ways to Weather the Storm Toxic Shame How to Cope with a Stubborn Child Ten Reasons a Man Should Cook The World of Dreams: Common Dream Themes Choosing Wedding Lingerie: How to Wow Your Groom on Your Wedding Night Identity Theft: How to Combat Phishing How to move on after a difficult break-up 4 Tips for Improving Your Dating Life Is Your Relationship Dysfunctional? Whittle Your Middle: 5 Strategies That Work More Articles by Staff (546)

Create a Article
CLMACLEOD7: "Deal Breakers"(meet us in the top 10 lists)
All Articles Create Article My Articles Posters Comments