6 Texts You Shouldn’t Reply To 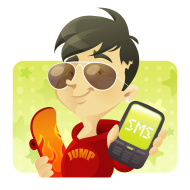 In this age of texting and chatting online it's becoming less common for people to actually pick up the phone and call someone. It also makes people much braver to say things they would never say to your face. This can be confusing in the dating world. There are a few texts that men will send that women should never reply to. Here are 6 of those texts.

You and your boyfriend had a fight and he hurt your feelings when he called you a pretty horrible name. Hours later you receive a text from him that contains an apology. Don't reply to that text. If he is truly sorry, he can call you on the phone and tell you. It's easy to say difficult things via text, but it means a lot more when it comes from him directly. Even if he texts you ten times to let you know how sorry he is, wait for that phone call. If he's truly sorry, he will call.

You have been texting with a guy for a few weeks and out of the blue you receive a text from him in the middle of the night asking what you're doing. Even if you're wide awake working on a paper for your English class, don't reply to this text. He doesn't need to know that you're awake at 1am. You can probably guess that he's not texting to talk in the middle of the night.

This is another situation where you should be getting a phone call and not a text. If a man wants a date with you, he should ask you personally. When you don't reply to his text asking you for a date, hopefully that will prompt him to actually make the phone call. If he never does, maybe you haven't missed out on anything special.

You get a text that reads "I had a great time with you" after your first date with a nice man. It seems like a great text to get, but if you reply to this text he might end up asking you out via text. If you receive a text like this you could certainly call him up and thank him for the text and say you had a great time, too. Don't ask him out for a second date though. Let him do the asking. If you hang up with him and he hasn't asked you and you later receive a text asking for a second date, don't reply and don't call him. Maybe he'll finally get the hint that he has to ask you out by actually talking to you.

You met a cute guy at the gym and flirted back and forth a little. Now he's texting you and asking you sleazy and inappropriate questions. It might be your common response to laugh off his obnoxious texts and attempting to change the subject, but you're only encouraging him to continue doing it. The next time he texts you with something inappropriate, simply don't reply.

Texting is a great convenience in many ways. Unfortunately, texting has led to people being a little bit lazy when it comes to relationships. Many people think they're too busy to pick up a phone and have a conversation with someone, but if he can't do it now, what hope is there for the future? Don't lower your expectations because texting seems to be the new way to do things.

deadears•Nov 10, 2019•Belleview, Florida USA
That a one side coin on your idiot thoughts - what if a deaf person can't talk on the PHONE but texting is that person only mean to communicate - what a nit whit you are

bhaywardt•Oct 9, 2019•Brackenfell, Western Cape South Africa
Love this article and it is spot on

ninasimone1519•Sep 28, 2019•fort lauderdale, Florida USA
each situation can be different, a demanding job that does not allow for phone conversations etc, but overall under the most general circumstances, the advice is to not support lazy communication. the world has changed with technology and became lazy to communicate the natural way.

somethinew•Sep 16, 2019•Redlands, California USA
Yeah, this is a good article,..
There's alot of times anyone needs to read these articles it opens your mind up,..to how stupid anyone can be towards someone else?

online today!
NOSTRUS•Jun 30, 2019•Galway, Ireland
Each to their own dont think any of these rules matter much ....some people prefer text to talking im one of them ......

ColoradoHillgirl•Jun 29, 2019•Goldfield, Colorado USA
I'm not fond of the ignore someone option. It seems more humane to just explain that you will consider 'whatever the topic' if the other will take a bit of time to speak real time real words, if that is your preference.

WhyNotAgain4love•Jun 23, 2019•Antwerp, Antwerpen Belgium
Agreed with @WordsandPics. The article is pure rubbish and nonsense. The article writer is naive about current trends in social networking communication.

In those situations it is just bad manners to text.

LuckyDuck2018•Apr 13, 2019•Prunedale,Salinas, California USA
Oh this would helped if I seen it. 6 texts warning if he could be really creepy... types which hey he knew where you are located...you know that kind helps...

It something I did see if that was seen as creepy text. It was...

online today!
WordsAndPics•Apr 12, 2019•Waterford, Ireland
Nonsense. To suggest you can never ask someone out by text is rubbish . All these things depend on the situation. Hard and fast rules are nonsense

Eulalia2015•Dec 20, 2016•Ouro Preto, Minas Gerais Brazil
I loved it!!
Post Comment
More Articles
Tactics of Manipulation 5 Signs You're Hanging Out With The Wrong People How to move on after a difficult break-up On Led Zeppelin First Date Dos and Don'ts 5 Habits Of Relationship-Smart Women More Articles
Staff Articles
7 Online Dating Tips For Beginners 8 Strategies to Get You Through Being Dumped by Your Boyfriend Dating Pitfalls: Spotting a Gold Digger How To Avoid The Pain of First Date Rejection 4 Reasons You're Still Single What Makes Forgiveness So Difficult? Developing Your Hidden Intuitive Powers 8 Tips to Live a Life That Is Positive in Nature 5 Signs You're Not Ready for a Relationship Fight Depression: 10 Natural Ways to Weather the Storm Toxic Shame How to Cope with a Stubborn Child Ten Reasons a Man Should Cook The World of Dreams: Common Dream Themes Choosing Wedding Lingerie: How to Wow Your Groom on Your Wedding Night Identity Theft: How to Combat Phishing How to move on after a difficult break-up 4 Tips for Improving Your Dating Life Is Your Relationship Dysfunctional? Whittle Your Middle: 5 Strategies That Work More Articles by Staff (546)

Create a Article
Divinitymagic: "Are you my Lois Lane?"(meet us in the quizzes)
All Articles Create Article My Articles Posters Comments