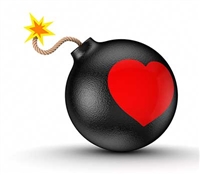 Dating is the point in a relationship when you're learning about the other person, finding out if his lifestyle matches yours. During the dating state you also find out important things that could be deal breakers. Sometimes it's easy to ignore little things that your boyfriend does or doesn't do, but sometimes those little things become bigger things. Here are four things that might seem little, but over time might become larger issues for you.

Your friends and family love you, right? They don't secretly pray that you never find love. They just want you to be with the right guy. Listen to their concerns with an open mind. See if what they say makes sense. Other people will often see things that you don't because they are not as close to the situation as you are. Instead of getting defensive and defending your boyfriend, see if anything they are saying has merit.

2. He lied about something small

Lying about something small and silly is a clear sign he can and likely will lie about something larger. Don't be fooled into thinking that a small lie shouldn't be considered important. If he can't talk to you about smaller issues, he won't have an easier time talking about larger issues.

Make sure that you're actually giving him a chance to call you. Don't always be the one to bombard him with phone calls, texts and emails. If he doesn't contact you, he may be used to you doing all the work. If you aren't the kind of woman who constantly calls your boyfriend, then he might not be interested. He doesn't need to call you constantly, but it's normal for a dating couple to want to talk to each other.

A small amount of jealousy is flattering, but there comes a point when that cute jealousy turns into something much worse. If your boyfriend is asking you to drop all of your male friends, even the ones from your childhood, his jealousy has gone too far. If he doesn't want you to see, speak to or even look at other men, including colleagues, this is no longer simple jealousy. If your boyfriend trusts you, he does not need to isolate you from all people of the opposite sex. Other signs that your boyfriend's jealousy has gone too far include asking you a million questions about a male friend, asking to see your emails with a male friend and accusing you of having feelings for a male friend.

It's important when dating to really look at who you're dating and not the person you wish he was. You can pretend that the issues don't exist, but that only means you'll have to deal with it as a larger problem in the future.

june_maklong7500•Jun 20, 2018•Pratumwan, Central Thailand Thailand
Leave or move on , is the better solution

More Articles
Tweaking Your Online Dating Profile to Attract Single Women 10 No-Pressure Christmas Date Ideas What is "Antique"? Does mr right exist Common Dating Fallacy: “Why Buy the Cow If You Can Get the Milk for Free?” 4 Things You Might Be Doing To Attract Online Dating Scammers More Articles
Staff Articles
7 Online Dating Tips For Beginners 8 Strategies to Get You Through Being Dumped by Your Boyfriend Dating Pitfalls: Spotting a Gold Digger How To Avoid The Pain of First Date Rejection 4 Reasons You're Still Single What Makes Forgiveness So Difficult? Developing Your Hidden Intuitive Powers 8 Tips to Live a Life That Is Positive in Nature 5 Signs You're Not Ready for a Relationship Fight Depression: 10 Natural Ways to Weather the Storm Toxic Shame How to Cope with a Stubborn Child Ten Reasons a Man Should Cook The World of Dreams: Common Dream Themes Choosing Wedding Lingerie: How to Wow Your Groom on Your Wedding Night Identity Theft: How to Combat Phishing How to move on after a difficult break-up 4 Tips for Improving Your Dating Life Is Your Relationship Dysfunctional? Whittle Your Middle: 5 Strategies That Work More Articles by Staff (546)

Create a Article
leonardo5: "Diego Maradona has died"(meet us in the forums)
All Articles Create Article My Articles Posters Comments