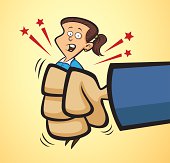 When a woman is dating the right man, she never doubts his intentions. She never wonders if his words and actions are meant to cause emotional pain. In a healthy relationship, questionable behavior is not a concern. A good man treats the love of his life like a queen. He goes out of his way to shower her with love.

After months or even years of emotional abuse, women lose sight of normalcy in regards to behavior. Those who are sensitive and kind often disregard all forms of negativity. They only see the good in others. In time they begin questioning whether or not they are worthy of kindness and respect from men. They become lost in a web of confusion, and many need reminders of how they should be treated by their boyfriend.

When dating the right man, kindness is never in question. Gentleness is one of the most important traits of a potential mate. It is a necessary component of love. When a man is naturally kind, he is capable of giving and receiving love. On the other hand, if he is kind one moment and uncaring the next, she should not be dating him. He may have mental and emotional problems that prevent him from making a long-term commitment. If she stays in the relationship, she will become a victim of emotional abuse.

True love leaves no room for selfishness in a dating relationship. It is important to consider how giving a man is when examining his integrity. That does not mean that he must regularly shower his lady with costly gifts and activities to be an upstanding person. However, if he grosses four or five times her earnings and continually asks her to pay for dates, he is inherently greedy. A man like that might only think of his date as a friend with fringe benefits. That type of guy should not make a dating commitment to anyone, but he does not see it that way. His choices are not just a result of poor upbringing. He knows exactly what he is doing and what he stands to gain.

When a guy truly cares about a woman, compliments abound. She knows without a doubt that she is the only woman in his life. Men who make comments about other women want to spark feelings of jealously and self-doubt in their mate. They continually play mind games. Dating a guy like that brings a woman's self-esteem down. It might seem obvious that she should leave the relationship, but many decide to stay. A man like that does not make a good friend let alone a trustworthy boyfriend or mate.

If a woman wonders if she has a future with a man that she is dating, he is not the right guy for her. The simple fact that she harbors doubts is an indication of serious problems. True love does not come with uncertainty, confusion, jealousy or cruelty of any kind. Men who cannot treat women respectably should be alone, but many are serial daters. They use and emotionally abuse every woman that fits their criteria.

Unfortunately, some ladies continue dating emotionally abusive men. They resign themselves to a life of emotional highs, lows and blows to their self-esteem. They need to imagine what life would be like if they were married to their abuser. Many stay while hoping that he will change, but problems will only worsen. He will not change unless he actually acknowledges a problem and partakes in ongoing psychological and relationship therapy.

pick_me•Dec 23, 2016•Gladstone, Queensland Australia
Not taking anything away from your article, but to balance it out are you going to write an article about how emotionally abusive women's words can be used to belittle and emasculate a man, driving him to insanity?

There should be no reason for a man to have to defend himself from such verbal soul destruction. Men get a bad reputation whenever physical or verbal abuse is accused, but in fact if a woman does it there is nothing said. We just hear "be a man and stand up to it", whereas statistically violence committed by women is more life-threatening than that caused by men.

Lets stop man-bashing and man-rideculing, everyone needs an encouraging and supportive atmosphere for a healthy mental and physical life, not just women.
More Articles
How to Be Romantic to Your Girl Choosing Your Battles: How to Keep a Silly Argument From Derailing a Good Relationship On Led Zeppelin 11 Dating Red Flags You Shouldn't Ignore 4 Things You're Doing To Scare Away Potential Girlfriends One Mans Food - another Mans Poison......... More Articles
Staff Articles
7 Online Dating Tips For Beginners 8 Strategies to Get You Through Being Dumped by Your Boyfriend Dating Pitfalls: Spotting a Gold Digger How To Avoid The Pain of First Date Rejection 4 Reasons You're Still Single What Makes Forgiveness So Difficult? Developing Your Hidden Intuitive Powers 8 Tips to Live a Life That Is Positive in Nature 5 Signs You're Not Ready for a Relationship Fight Depression: 10 Natural Ways to Weather the Storm Toxic Shame How to Cope with a Stubborn Child Ten Reasons a Man Should Cook The World of Dreams: Common Dream Themes Choosing Wedding Lingerie: How to Wow Your Groom on Your Wedding Night Identity Theft: How to Combat Phishing How to move on after a difficult break-up 4 Tips for Improving Your Dating Life Is Your Relationship Dysfunctional? Whittle Your Middle: 5 Strategies That Work More Articles by Staff (546)

Create a Article
galrads: "Happy Belated Easter Everyone !"(meet us in the forums)
All Articles Create Article My Articles Posters Comments