Is it possible that Trump was hinting about something he might know, but it is a hidden technology/medicine?


Of course, those sound like ridiculous ideas....anybody...a 4 year old would know better, which makes me wonder. 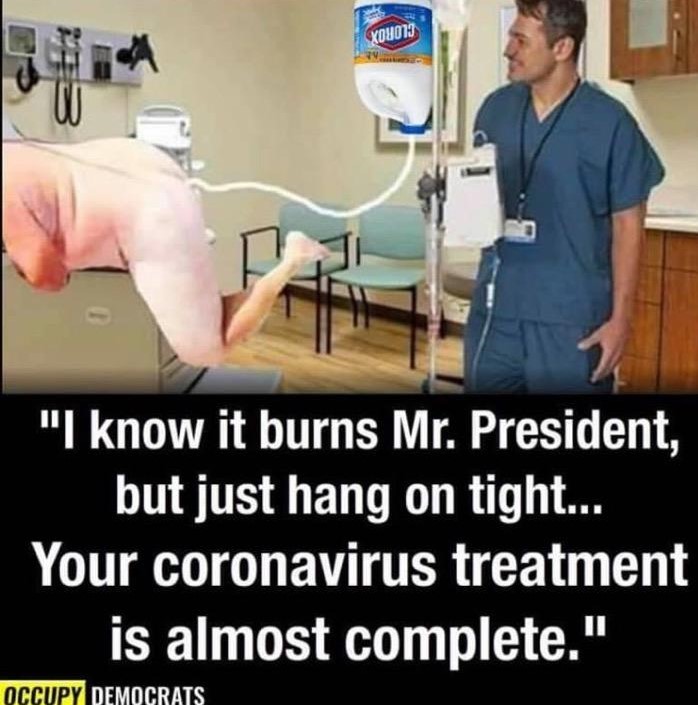 Merc....maybe there is something to the Clorox treatment after all.

online today!
Johnny_SpartonOP•May 1•Williamston, Michigan USA
Not quite injecting it Soony, but putting it to use on the body.

It is good to disinfect hard surfaces or to whip away DNA in a murder trial.

Maybe! You should try it. And let us know. And remember that! I will be rooting for you.


PS. Invite Robert to do it too! That will loosing his life up. Just Saying!...

Pepps...yes...that would be a good cleaning agent for Robert's pits.

usha123•May 2•Colombo, Western Sri Lanka
To begin with Johnny, Trump is only good at hinting he's the best president.

Johnny, there is a local saying, " no matter what is said, how it is said, by whom it is said, the one who listens must listen wisely."

I was shared the Trump's disinfect video by someone. There was a guy who spoke about the virus before Trump made that statement. He said lots of important and interesting things about how the virus can be destroyed and it's survival periods.

But media highlighted the stupidest part of the press conference. ( or whatever it was )

Why didn't people pay attention to the other person and learn something about the virus and cleaning to destroy it, is what I can't understand.

As a matter of fact Trump says whatever comes to his head. There is no filter in between his brain and mouth.

If radiation is being used as a treatment method, why not UV light ? There is no impossibility but possibility of anything. ( but not injecting lungs with surface cleaning and disinfectant liquids of course. Sarcasm or not. )

Why not use UV light to destroy the virus in vast areas? How bleach and disinfectant should be used to kill the virus outside the body? There are lots of things to Learn and work on.

Bullshit media is very good at propaganda. I wish Trump shuts up or think before he says something just to see what media will do next. I am always flabbergasted by people following the mainstream media frenzy than actually studying the important stuff.

By the way Clorox is a brand name. When you mention a brand name instead of the chemical components, it sounds all wrong anyway.

I am not a scientist. So I will rather let the scientists do the necessary to find out ways to fight and destroy this virus once it enter the body. But doesn't necessarily have to be destroyed only once it enters the body. Isn't it? It has the ability to survive outside the body on different surfaces for different periods of time. For that we can use Clorox no matter what.

There are lots of parrot brains in the world who repeat or make fun of some empty words media are good at highlighting.

All we can do is clean and disinfect our own living spaces that can be invaded by the virus for the time being.

A body cleansing with a strong, really strong laxative and prune juice and dried peaches.
Then after you empty out.. follow that with a 72 hour binge of drinking and drinking!
YEAH! That will cure any darn virus, cold … or you'll be so busy in the toilet, and the next 3 days drunk.. you wont notice anyways.

And get Angelpepp to join you in all that activity. Just saying.

online today!
Johnny_SpartonOP•May 2•Williamston, Michigan USA
You know Usha, I usually listened to his press briefings and for some reason, that day, I missed it and only heard about his recommendations about the light and injections.

But you are right, we are right back on track.....certain news agencies are spinning things in the direction that most fits their agenda. Because of that, I have just about stopped watching the news completely.

What is wrong with Clorox?

You know....well, maybe you don't because you don't live in the U.S., but here...I think anyway...bleach and Clorox has become synonamous with each other. Yes...it is spelled wrong, thank you very much.

Don't listen to the main stream media. Don't believe a thing they say.

BUT, DO BELIEVE everything you read here on the blogs!

You are into that all natural organic cleansing stuff. Me, two chocolate X-Lax bars does the trick. I think they call that the Hershey's Squirts....

....ah....there I go mentioning the name of a product again.

Yes Robert....Pepps is back. Can you tell, she is still her old self.

There are so many different theories, thoughts, guesses, conspiracies, media opinions, scientific expert opinions out there that who knows what to believe.

I will say this...yes....believe all you can from the blogs and from that fine story you masterfully wrote...

Well, I will leave this part for a different blog.

I knew a guy who used to sneeze and it sounded like he said Hershey, "Ah ah ah HERRRSHEEE!"

I noticed as soon we start with our BAWDY talk, the ladies go away. Not one comment from Usha or Pepps since my first comment on this blog. Sheesh!

online today!
Johnny_SpartonOP•May 2•Williamston, Michigan USA
I knew a guy who sneezed and had a little Hershey Squirts squirt out.

online today!
Johnny_SpartonOP•May 2•Williamston, Michigan USA
Robert, how do you know they are not sitting in front of the screen right now, pleasuring themselves, as they are reading your bawdy talk....thus, not having the capacity to type. How do you know?

online today!
robrt787•May 2•Somewhere, California USA
But, but they can't be Johnny. They're Ladies. Nice sweet innocent ladies.
Ladies don't do that kind of thing, do they?

online today!
Johnny_SpartonOP•May 2•Williamston, Michigan USA
How do you know?

ysabeljhen•May 2•Newark, Christmas Island
Johnny
A nice shower would do

online today!
Johnny_SpartonOP•May 2•Williamston, Michigan USA
Okay Robert, I better pack up shop here before I get banned or something.

Take care....truly love your story and cannot wait to read the next part.

Good night to you and everyone.

You smell like Walnuts, err I mean Walnut Wood.

Have a good night!

If he takes a shower, maybe the bed bugs wouldn't bite.

EXRED•May 2•Northumberland, England UK
God his words or question to medics has been so distorted.

Have you thought how it must have looked years ago when medics said best way forward on a disease was to inject disease.

then the world took off. Trump haters that is that distort every single word he says
Neither wonder he hates the press, We do over here now in England press and broadcasters are really being devils with everything that is being done.
The media have gone crazy
Stay Safe

online today!
raphael119•May 11•washington d.c., District of Columbia USA
Trump thinks he is a great genius and probably thought he was having divine visions of a medical cure. Stephen Hawkins said people who brag about their IQ'S are losers.

online today!
LaFonda•May 11•Irving, Texas USA
Most people around Trump has the virus.

He doesn't have the virus.

Did he get vaccinated against Covid19?

Rebootx•May 11•Avalon, Dublin Ireland
Trump might just have been right, except he got the type of drink wrong, you don't need bleach, just soapy water and that won't kill you. The soap melts the skin of the Virus and kills them.

Realreality•May 30•Pompano Beach, Florida USA
Everybody latching onto Trump's disinfectant comment. He was asking a question of someone in his medical task force at a time when he should not for this same reason of the potential people taking it out of context.

Oh by the way..you have never heard to make water safe to drink add a few drops of bleach to a gallon of water. The first time I heard that after a hurricane devastation I was shocked. Since then people have tried it and still living... Kudos to bleach!!

Post Comment
More Blogs
My d*ck Pick the Future of America (It's Not Good) Just as well I saved it Somebody went to Jared.....far too often, and I don't mean only for wedding rings What the H**L "Antifa"?????? If you are not happy, then its not a happy ending More Blogs
Johnny_Sparton Blogs
what would you do? 2 things of curiosity "Absolute" no-racism some old sayings my dad use to say... HR 6666 Ironic....people attacking other people Evidence that Covid 19 was around in November? disinfect the body....possible? Dr. Rashid Buttar and Covid 19 Boy....the things we have taken for granted.... beauty is timeless Comet Atlas Contact Tracing Pursuit of Happiness psychological effects of isolation The Virus....what I heard U.S.A.....making it great again How we learned about ancient Rome symptoms of Corona two serpents More Blogs by Johnny_Sparton (269)
Johnny_Sparton Contributions
Blog (269) Blogs (269) Games (2) Forums (1)

Create a Blog
mzsunshine71: "whatcha think"(meet us in the profile reviews)
All Blogs Create Blog My Blogs Bloggers Comments