Still More Evidence That Lockdowns Were A Massive Waste Of Time, Money, And Lives

The nation’s economy is on track to drop by more than 30% in the second quarter. Unemployment is well into the double digits. Half of small businesses might close in the next six months. All for naught, it would appear, giving the growing pile of evidence that the economic lockdowns didn’t work.

The latest evidence comes from a report out of JP Morgan Chase & Co. this week. It finds that there’s been no increase in cases or deaths as other nations and U.S. states start reopening. This flies directly in the face of all the public health expert predictions of a major spike once people started moving about.

“Virtually everywhere, infection rates have declined after reopening, even after allowing for an appropriate measurement lag,” says the report’s author, Marko Kolanovic, a quantitative strategist at JPMorgan. “This means that the pandemic and COVID-19 likely have (their) own dynamics unrelated to often inconsistent lockdown measures that were being implemented.”

Another research paper released in early May, this one by Thomas A. J. Meunier of the Woods Hole Oceanographic Institution, found that the lockdowns in western Europe had no evident impact on the epidemic.

“Comparing the trajectory of the epidemic before and after the lockdown, we find no evidence of any discontinuity in the growth rate, doubling time, and reproduction number trends,” Meunier says.

In the United Kingdom, the disease reached its peak on April 8, which, given the way it progresses, means the peak infection was around March 18, according to Oxford University professor Carl Heneghan. That’s almost a week before the UK went into lockdown mode.

Bloomberg’s Elaine He looked at the data from Europe, compared it with their different strategies to deal with the outbreak, and concluded that “there’s little correlation between the severity of a nation’s restrictions and whether it managed to curb excess fatalities.

Meanwhile, India’s massive lockdown – the largest in the world – is coming under attack for being ineffective. India now has more than 100,000 confirmed cases and is seeing the fastest growth in South Asia.

“There is no doubt in my mind that the lockdown has failed,” an epidemiologist who is a member of the Indian government’s coronavirus task force told The Caravan magazine. “Social distancing, wearing masks, and hand hygiene work. Together, these measures reduce the rate of transmission. However, to date, there is no evidence that lockdowns can cut down transmission.”

And Sweden, which had come under harsh attack from public health experts for not imposing an all-out lockdown, is now being held up by the World Health Organization as a model for the future.

online now!
ChesneyChrist•May 23•Manchester, Greater Manchester, England UK
Sweden is so progressive in healthcare and social retarding it's basically a picture of shielded. Wholesale engineered to be even more exceptional than you but with limbs intact.

online today!
zmountainman•May 23•Motril, Andalusia Spain
Will be interesting to see over the coming weeks and months how many "experts" governments will dig up to disprove what you're saying, take here for example, millions of fines have been issued for minor infractions of lockdown, if it's proved lockdown was never going to work will all those fines be returned, it's about the only thing keeping the economy going far as I can see. I read here around 800k small businesses are likely to fail, and today I see Hertz US has filed for bankruptcy protection, if what you say is proved who will compensate all those businesses

then every citizen in locked down countries have had their lives affected, will we all sue for compensation

online today!
OldeGuy•May 23•Muskegon, Michigan USA
Willy - methinks you doth protest too much - all much ado about nothing (apologies to Shakespeare)

online today!
kpthatsme•May 23•Chicago, Illinois USA
I think it's a matter of being way over cautious. A few weeks ok - maybe even a month - while they figure things out. Hot spots - big cities with large outbreaks - ok maybe. Why are small towns with virtually no cases be forced to close down? Illinois is a big state. 3 or 4 larger metropolitan areas. Why must the other 75% percent of the state be shut down for this long? I don't get it. Now our governor says ok - you can start opening things up with some restrictions but our mayor says no!, Chicago's not ready. This from a woman who found it to be ok to get herself in the midst of our pandemic because she is in the public eye. It seems like it's all just one big power play.

My son, his girlfriend and my 2 granddaughters are bucking the system and heading to Wisconsin for a couple of days. It appears the girlfriend's mother has become ill. Not corona. She has been tested. Anyway, the mother was staying in WI with the family that she works for. The decided to stay-at-home in their summer home.

My son's girlfriend was going to go up alone and bring her mom home. My son said [email protected] it! They found that a lot of hotels in the area are open. Their pools are open and most of their businesses are open. Now some may have some restrictions, but they're open. The gentleman at the hotel kind of laughed when they were asking questions about being open. He said that they have been receiving a lot of similar calls. So, they're all going up for a couple of days. Maybe find a bit of normalcy for the 2 little ones ( ages 2 and 5). Play in a pool. Play in a park. Find a playground. They've been more or less cooped up for what feels like a lifetime.

For me. a bit of peace and quiet for a few days

online today!
kpthatsme•May 23•Chicago, Illinois USA
I meant to say the mayor got herself a haircut in the midst of the pandemic

online now!
cryptorchid•May 23•Easton, Pennsylvania USA
i don't know if you can read this 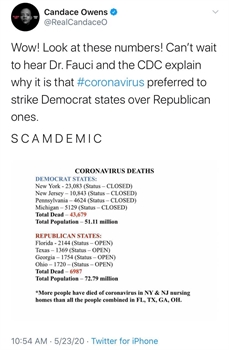 Rebootx•May 23•Avalon, Dublin Ireland
Somebody came up with a social distance of 2 metres, which meant schools and offices had to close.
Now they are saying that 1 metre is sufficient. So 6 weeks of school / office closure for nothing.

seniorgal4u•May 30•Rutland, Vermont USA
If there had been no lockdown, how many lives would have lost by now?

online now!
rizlared•May 30•Temp accom with my son, Worcestershire, England UK
We wouldn't have needed a lockdown if the people were responsible citizens, but as can be seen by the posts just here in CS, they had to impose a forced lockdown due to the irresponsibility of a minority.
So if you want to apportion blame, then blame...........

online today!
FargoFan•May 30•sydney, New South Wales Australia
So how do you compare the outcomes in USA with those in Australia, Taiwan, South Korea? Just asking of course. And how do you explain them?

Weather, population density, measures taken to guard against threat. But the biggest factor is obvious: the amount of people that travelled from the source outbreak area (Wuhan. But also North Italy) and ultimately ended up aiding the spread of the virus. U.S.A. is China's biggest market by far. U.S.A. also has large Italian-American community. It's practically certain that more infected individuals landed in USA than anywhere else. Probably by a significant amount. And once it's there, it spreads extremely easily, especially in high density areas like NY and NJ(which had also been experiencing cold weather).

online today!
FargoFan•May 30•sydney, New South Wales Australia
@C_R but here, this blog is someone claiming the lockdowns were a waste of time. I suggest because of strict rules and public cooperation in Taiwan Korea Australia NZ even SNG despite their recent bloom. these countries have fared better. Still cannot explain Taiwan, which seemed pretty casual about quarantine in fact.

online today!
chancer_returns•May 30•Dublin, Ireland
The fact is we will never know what difference it would have made. I've heard it said recently that the virus spreads easier indoors. But most of all it's an extremely highly transmissible virus, so once it arrived somewhere and started to spread, that's it really. Most people think the virus was spreading around in many places in January, maybe even earlier. So i think the idea that much would be different is a bit fanciful. The virus wasn't identified and dealt with early enough at the source of the outbreak. There was a lack of communication, a denial of offers of cooperation, and travel worldwide continued as normal. So that was that.

online today!
Realreality•May 30•Pompano Beach, Florida USA
Remember Sweden lifestyles are much healthier than the USA. Lock down would work if people would adhere to the social distancing and wash hands more often. Also cleaning the door knobs and keys more often.

online now!
loulou77•May 30•Vancouver, British Columbia Canada
I am glad that visitors are not able to go to the hospital...I do not wish to take chances on my health...so we do what we can and review what works...safety is a priority with patients and staff...