Some not so fun facts 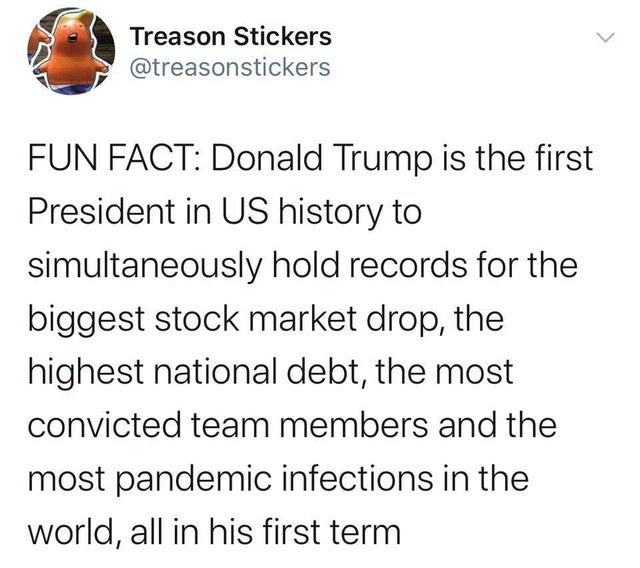 Will he be given the chance to break those records some more ?
I sure hope the American voters have learned from his first term
and don't give him the opportunity to do so.....again.
Post Comment

online today!
GeneralBeacon•Jun 28•New York, USA
I guess it has nothing to do with Covid19 and Democrats not wanting to work posting hate instead all day on Twitter against the president.

LaFonda•Jun 28•Irving, Texas USA
You could add impeachment (I know it's not the first) to the list.

online today!
JimNasticsOP•Jun 28•Kingston, New Jersey USA
Definitely a large part of it has to do with Trump making us more exposed to Covid-19 and less able to handle it.
His ignoring at least a dozen warnings about the pandemic, including from his own White House staff.
Then, his denial of the threat, claiming it was a "hoax".
His paring down the official pandemic response team.
His forcing states to bid against each other for supplies, rather than buying in bulk
and then distributing to states on a need basis. This mishandling caused prices for related medical goods to skyrocket and cause shortages for lower bidding states.
His constant urgings to open things up too soon caused a huge second wave in many states like AZ, FL, and others. Also, his bizzare medical recommendations. He was practicing medicine recommending ineffective drugs without a license or any reason. That is criminal ! Also, his lack of leadership in simply wearing a mask. Thousands of American deaths from Covid-19 are the result of his ineptness and inappropriate behavior. He is a danger to the health of the citizens of the USA. He has to go.

online today!
Miss_Cellaneous•Jun 28•On the Costa at the moment.., Valencia Spain
I look at the statistics re America and the virus and I just can't understand why it's all so "political" it's a virus that's killing people every single day over there and it doesn't seem to be getting any better. I've stopped posting my views re American Politics as I get the personal insults from certain posters saying that I need to take my meds or that I need to go to weight watchers, because I don't agree with them. Yet they hide behind a "blank" photo? I'm not American so I really don't have a say re the politics in America. Not long to go till 3rd November and then America will know who their President will be then. I just wish that some "Americans" would stop trying to ridicule the Uk Especially when they have never even been there. At least I've had the opportunity to visit America many times since 2013 . I don't like Trump and many people that I've met (including my friend and his family) don't like him either. We all have our own views and are entitled to them. America, carry on, it will soon be over and done with on 3rd November

online today!
JimNasticsOP•Jun 28•Kingston, New Jersey USA
L - Yeah, if only he was removed from office, we would have been better off.
We have the justice obstructing republicans in congress to 'thank' for that.

online today!
JimNasticsOP•Jun 28•Kingston, New Jersey USA
MC - if you look at the total, it's not getting better. But, it's not that simple.
There are some states that have brought the infections down greatly, like New York & New Jersey. There are other states like Arizona & Florida where it is peaking. Those are states that followed Trump's urgings to open back up quickly. New Jersey & New York instead did it gradually in steps separated by weeks to see the impact upon infection rates with social distancing retained. They adjusted the rate of opening up based on actual medical data. They did it intelligently, unlike the president's urging.

Yes it is horrible how some people treat others. Anyone who does that to you on my blogs gets deleted. They spout nonsense and then try to intimidate people to accept their b.s. or get harrassed. I don't put up with that.
Post Comment
More Blogs
Piece of cake... Hurricane Isaias... An Australian Viewpoint - Big Ideas - unaligned speakers on Boundaries Identity politics. Combined with Alcohol... Do You Know What Happens When A Nation Turns Away More Blogs
JimNastics Blogs
Interesting article about why evangelicals are predisposed to believe liars If you read it all, quite a moving obituary. Breaking News ! Trump & his company under investigation for fraud. How to get around an election. Exactly how dumb the typical Trump supporters are The Republican lines Trump would never cross.....but does. Under Trump the national debt has increased from $19.9 Trillion to $26.5 Trillion Lies about the virus spread by conservatives end up killing people. Stop it ! After over 10,000 documented lies, you still trust Donald Trump Dogging the virus This is your brain on Facebook Picking (Tom) Cotton Chillin' What an excellent speech from a real president - It still holds true today Biden leads handily in several polls in a state no Republican has won without it for 96 years. The man with the most US Television air time in history died yesterday - Regis Philbin The 2020 Electoral College outcome blog Trump to Throw Out First before game at Yankee Stadium That Epstein & Trump relationship The Mick Hucknall / Simply Red Music Blog More Blogs by JimNastics (1,785)
JimNastics Contributions
Blog (1,785) Blogs (1,785) Forums (1,037) Threads (166) Movies (26) Games (12) Videos (7) Quizzes (5) Polls (2) Music (1) Poems (1) Poetry (1) Quizzes (1)

Create a Blog
Orzzz: " What kind of cell phone do you own"(meet us in the forums)
All Blogs Create Blog My Blogs Bloggers Comments