On my way downstairs this morning, I found a cat on the landing. This was new as I don't recall any cats around this building. Acknowledging the cat was there, I stopped and watched him as he looked at me. I continued down the stairs and (to my surprise) the cat didn't run away.

I did some errands and the cat was in the same place when I returned.
Okay, something's up.
Why here?
Maybe someone abandoned this animal as he's not afraid of me.

Flashback to when I was 12 years old and we had a cat named Tiki with the same markings... I get it, this must be a descendant of Tiki!!

So, I poured a small bowl of milk and Tiki2 (notice I've already named this cat I've known for less than 2 hours) started drinking the milk. I headed off to work and Tiki2 was at the bottom of the stairs when I returned after dark.

My wife suggested we feed the cat and I said if we do, he'll never go away and 3 minutes later I had a small bowl of Spanish style ground beef warmed in the microwave oven. By then Tiki2 was in the bushes possibly looking for food. Two seconds later the beef was on Tiki2's dinner menu!

Wanting to be a part of the virtual adoption, my wife called down to me saying the cat needed some rice. "Cat's don't eat rice", said I, but she had a scoop of rice in her hand and added it to the partly consumed bowl of beef. The cat stopped eating and walked away. Insisting cats eat rice, I agreed... maybe they do, but this isn't a Chinese Cat!

Anyway a few neighbors coming and going all noticed the cat today and none of know where the cat came from or where the cat belongs. One woman tried to reach animal services to pick up the animal and take him to a place for care and adoption but she was turned down as Covid has that department only handling emergencies.

So for now, Tiki2 has food and can seek shelter under the stairs when it rains. 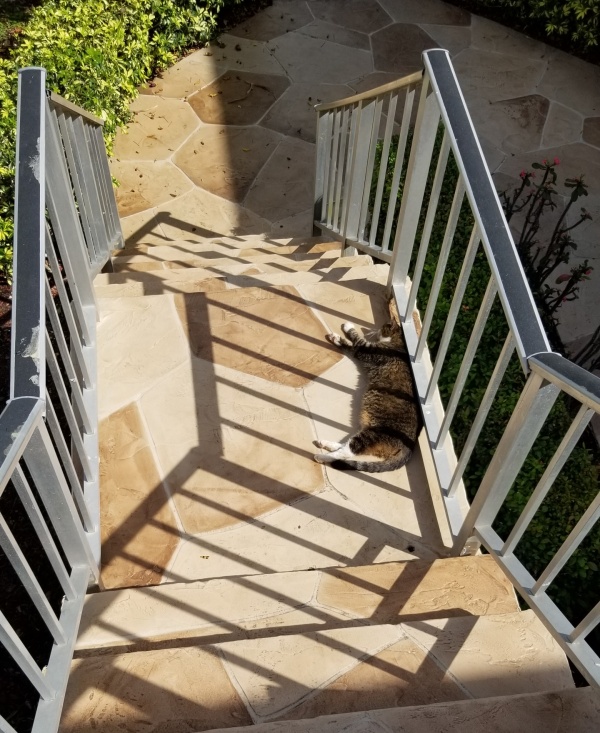 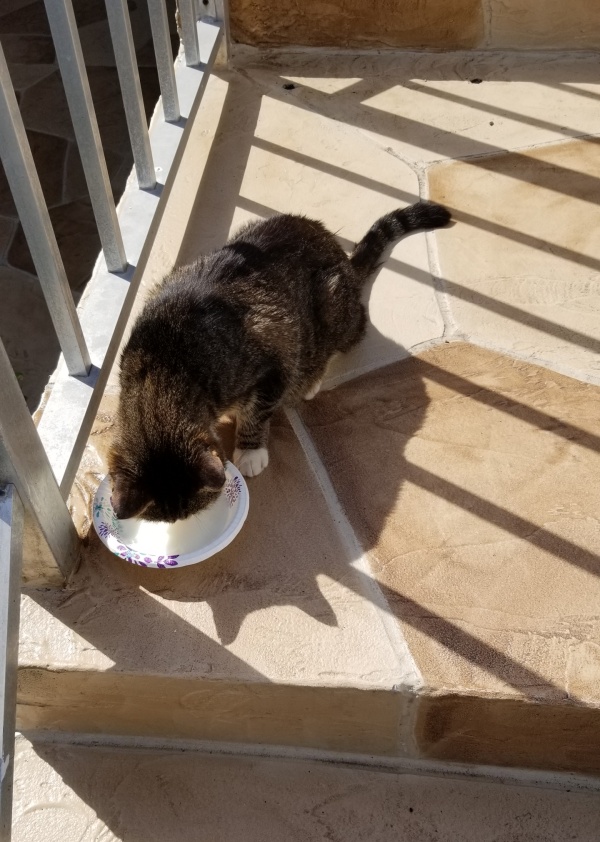 Melody1671•Mar 19•Maracaibo, Zulia Venezuela
That is so sweet, Chat... Thanks a lot, to you and your wife, for being so kind to that little angel...

online today!
Bluesky60•Mar 19•Marysville, Washington USA
Ahhh nice to have a cat around.

online today!
Bluesky60•Mar 19•Marysville, Washington USA
Ahhh nice to have a cat around.

online today!
UnFayzed•Mar 20•Tampa, Florida USA
Chat many loving pet relationships started off just the way you describe. I'm sure you have enough love in your heart, as well as your wife's to rescue that cat and in return be rewarded with loving memories to treasure forever.

online now!
chatillionOP•Mar 20•Boca Raton, Florida USA
Nice things to say... but partial retirement is an option with extended travel. Pets would only complicate my life. I have to say no to this option.

online now!
chatillionOP•Mar 21•Boca Raton, Florida USA
Day 3 and the cat is taking residence on the stairs landing.
Milk for breakfast and bits of ground chicken for lunch.
My neighbor said her husband found a shelter in Palm Beach but they cannot arrange transportation. If he gets a number and address, maybe I'll volunteer to go there.
My concern is how the cat will react. I'll need to borrow a small animal cage as I don't need a frantic cat jumping around on my leather seats!
Or worse, getting cat scratch fever.

Friskyone•Mar 22•Santa Fe, New Mexico USA
I have a cat like that. I named him too. "Tigger", he is so friendly, so I also made the mistake of feeding and giving him fresh water when he stops by. I think he has an owner so I don't feel bad not letting him in so he will stand outside the door and meow's for me.
I love him but my two indoor cats don't.

online now!
chatillionOP•Mar 22•Boca Raton, Florida USA
I found a few more things:
The cat is deaf and only responds to touch or can feel footsteps as people approach from behind. Female, undernourished. Loose belly skin, possible pregnant or recently had a litter.

online today!
Loh_key•Mar 22•Poway, California USA
At this rate, if you find she's blind in one eye, and only has three legs, your going to have to change her name to "Lucky"

online now!
chatillionOP•Mar 22•Boca Raton, Florida USA
If she has 3 legs, I'll name her Ilene... or is that I lean?

online now!
chatillionOP•Mar 22•Boca Raton, Florida USA
Back and forth a few details.
I'm told the cat was deaf and witnessed she didn't respond to "Here Kitty, here Kitty".
A test today by jingling my keys woke her up.
Deaf... no. Hard of hearing... I think at times we all are !!

The cat has a notched ear and I'm told that's what they do to mark the animal was spayed. Not sure about the excess belly skin. It's a mystery to me and could be left from a previous litter... or this cat was really fat at one time then abandoned.

Day 5 with lots of food and her ribs aren't showing like they did last week.

I contacted the president of my association advising I'm volunteering to transport the cat to a 'no-kill' shelter/sanctuary and (although feeding strays is against the condo rules) some of the neighbors are helping out until I can arrange travel later this week.

Lucky for me, they have a pet cage I can borrow.

Profile Deleted•Mar 22•
Don't worry about the access belly skin. Some people call it a "primordial pouch." All cats have that to a greater or lesser extent, especially if they are wild. Its there to protect the belly in case a cat fight rips the skin. Heres an article about it.

But the point is, its harmless.

Honestly, if you want to keep the cat outside that's perfectly fine. She will take care of herself and wont be too inconvenienced if you have to go away for a trip. My mother has 4 cats that rarely come inside but still keep her company when she sits outside.

Sir_T•Mar 22•Newcastle West, Limerick Ireland
That was me.


A test today by jingling my keys woke her up.
Deaf... no. Hard of hearing... I think at times we all are !!
The 'official' test for hearing with a cat, is use of an electric can opener.
They can't resist that !

online now!
chatillionOP•Mar 24•Boca Raton, Florida USA
I spoke to a association president about the cat.
She told me not to feed the cat as it's against condo rules.
I stopped last week. However, my neighbors are constantly feeding the cat by signs of uneaten food and containers around the stairs.
That said, the cat will not attempt to find her way home now.

One neighbor complained and wants to know who the guilty party as someone is feeding the cat tuna on the 2nd floor - evidence of an open can by the stairs.
The security cameras are focused across the stairs and into the courtyard.
That person could be fined.

I phoned one county animal rescue center and emailed another waiting for a reply so I can transport the cat to be adopted.

online today!
JimNastics•Mar 24•Kingston, New Jersey USA
Are cats not allowed as pets in that neighborhood by the association ?

online today!
JimNastics•Mar 24•Kingston, New Jersey USA
If they are, perhaps one of the neighbors that are feeding the cat might consider taking ownership.

If not, see if there is a Humane Society near you.

Boca Raton Humane Society Rescue Shelter is a 100 No-Kill Animal Shelter located in Boca Raton, FL. We rescue and rehome approximately 2,500 dogs and cats per year. We are home to 350 animals who available for adoption each day. 100 of all monies donated go directly to the rescue, housing and medical care for the animals under our protection. Our adoption hours are Tuesday through Sunday from 11am – 430pm. Visit us at 21287 Boca Rio Road, Boca Raton, FL. You can reach us at 561-482-8110. DBA Tri County Humane Society.

No volunteers for adoption.

I've already contacted Tri-County (at the address you listed) and waiting to see if they require an appointment.

Create a Blog
ooby_dooby: "65 year old music"(meet us in the forums)
All Blogs Create Blog My Blogs Bloggers Comments