One of my external property surveillance cameras picked up the rapid appearance and disappearance of s Cryptid this week This camera has been running for weeks without anything more interesting than an occasional deer or some turkeys. Then I observed this footage. The camera is still operational and the event has not repeated yet.

Beyond conversion from AVI to MP4 for purposes of easy upload this footage has not been altered or doctored in any way. I did attempt to freeze video, extract the image and sharpen that extraction (which is the thumbnail for the video), but the video camera in question is a low resolution and the thumbnail you see is as good as it gets. It almost looks like a kitty cat or something similar. However, so far as I know this is not standard cat behavior, so something else then.

Ancient human myths and folklore are full of tales of animals that can do this. They refer to it as appear and disappear at will or turn invisible. My 21st century mind thinks teleport, or dimensional shift. In any case as far as I know capturing one of them on film or video is still a rare event.

online today!
Ken_19OP•May 2•Winchester, Virginia USA
Here is the 'freeze frame' image at the best resolution I can offer from 20 yards away. 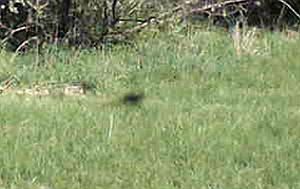 online today!
epirb•May 2•Dannevirke, Hawke's Bay New Zealand
Seen them all , bands of lights like a light bar floating , insects looking like monsters , their massive weight just enough to bend a grass straw into the picture . Flat batteries still able to have the PIR trigger but not enough to flash brightly , dark shadows

. Goats don't move during the dark but every other animal does .

online today!
Ken_19OP•May 2•Winchester, Virginia USA
Jim - That grass had a mowing only a week earlier. And based and based on the distance and the perspective that's a 3 - 6 pound critter, a lot bigger than a chipmunk. Also the color is wrong.

opirb - You are rambling a little I think. You sound like you want to claim it is just a very fast patch of dark sunlight??

I just checked the footage since then, nothing unusual.

online today!
epirb•May 3•Dannevirke, Hawke's Bay New Zealand
I'll be brief then , its an insect close to the camera . I have up to 2000 photos per camera to wade through per month , nothing I've not seen

online today!
Ken_19OP•May 3•Winchester, Virginia USA
Hi Crazy Heart. Well I am pretty sure it wasn't an insect doing a teleportation to the camera lens. LoL
I belive the Pinoy term is Palasekan (Ilongot) which may or may not be the same as what is here.

Johnny_Sparton•May 3•Williamston, Michigan USA
It is so quick Ken. I am wondering if it is not a shadow from something flying in the air.

....possible glitch in the camera? I really do not know but it is interesting.

PS I have lost some weight off the belly since then.

online today!
Ken_19OP•May 5•Winchester, Virginia USA
Johnny it behaves exactly like what the 10th century Irish called a cat-sith, described as a cat like creature that appears and disappears. Now I have to wonder, when we think we see something out of the corner of our eye, but when we look harder there is nothing, was it one of these?

As surveillance cameras and smart phones proliferate more and more videos like this are emerging around the planet.

online now!
raphael119•May 5•washington d.c., District of Columbia USA
Why is it holding that stick with a flag on top/ Surrendering to the camera?

online now!
raphael119•May 5•washington d.c., District of Columbia USA
On the night of 8–9 February 1855 and one or two later nights, after a heavy snowfall, a series of hoof-like marks appeared in the snow. These footprints, most of which measured about 4 inches (10 cm) long, 3 inches (7.6 cm) across, between 8 to 16 inches (20 to 41 cm) apart and mostly in a single file, were reported from more than 30 locations across Devon and a couple in Dorset. It was estimated that the total distance of the tracks amounted to between 40 and 100 miles (60 and 160 km). Houses, rivers, haystacks and other obstacles were travelled straight over. Footprints appeared on the tops of snow-covered roofs and high walls which lay in the footprints' path, as well as leading up to and exiting drain pipes as small as 4 inches (10 cm) in diameter. The 26 May 1855 issue of Bell's Life in Sydney published in its Miscellaneous Extracts column a "Weekly Dispatch" dated 18 February:

"It appears on Thursday night last, there was a very heavy snowfall in the neighbourhood of Exeter and the South of Devon. On the following morning the inhabitants of the above towns were surprised at discovering the footmarks of some strange and mysterious animal endowed with the power of ubiquity, as the footprints were to be seen in all kinds of unaccountable places – on the tops of houses and narrow walls, in gardens and court-yards, enclosed by high walls and pailings, as well in open fields."

"The superstitious go so far as to believe that they are the marks of Satan himself; and that great excitement has been produced among all classes may be judged from the fact that the subject has been descanted on from the pulpit."

"The impressions of the foot closely resembled that of a donkey's shoe, and measured from an inch and a half to (in some instances) two and a half inches across. Here and there it appeared as if cloven, but in the generality of the steps the shoe was continuous, and, from the snow in the centre remaining entire, merely showing the outer crest of the foot, it must have been concave."

The area in which the prints appeared extended from Exmouth, up to Topsham, and across the Exe Estuary to Dawlish and Teignmouth. R.H. Busk, in an article published in Notes and Queries during 1890, stated that footprints also appeared further afield, as far south as Totnes and Torquay, and that there were other reports of the prints as far away as Weymouth (Dorset) and even Lincolnshire.

Evidence
There is little direct evidence of the phenomenon. The only known documents were found after the publication during 1950 of an article in the Transactions of the Devonshire Association asking for further information about the event. This resulted in the discovery of a collection of papers belonging to Reverend H. T. Ellacombe, the vicar of Clyst St George during the 1850s. These papers included letters addressed to the vicar from his friends, among them the Reverend G. M. Musgrove, the vicar of Withycombe Raleigh, the draft of a letter to The Illustrated London News marked 'not for publication' and several apparent tracings of the footprints.

During many years the noted researcher Mike Dash collated all the available primary and secondary source material into a paper entitled The Devil's Hoofmarks: Source Material on the Great Devon Mystery of 1855 which was published in Fortean Studies during 1994.

online today!
Ken_19OP•May 5•Winchester, Virginia USA
And the relevance to the video is?

online now!
RoseHipster•May 5•In God's Hands, Wisconsin USA
Ken I was thinking about your mystery and pondered whether that is the same phenomenon that makes blogs here go ...poof!!

online now!
galrads•May 5•Dublin, Ohio USA
Regarding henry bullet velocity. Usually a chronograph is located near the business end of the rifle to measure the muzzle velocity where the most energy is found in the trajectory of a bullet. Where is the chronograph in this youtube video?

online today!
Ken_19OP•May 6•Winchester, Virginia USA
15 feet in front of the muzzle as it is supposed to be. If it was closer it would record the speed of the muzzle blast thereby giving a false reading. Anything 15 - 20 feet is considered Muzzle Velocity as the bullet has not measurably begun slowing yet due to angular momentum and ballistic coefficients helping to overcome aerodynamic drag.

BTW A Henry is a lever action rifle that looked like and was the ancestor of the cowboy's Winchester. There is also a Peabody Henry rifle. These are Martini Henry rifles (and carbine). The 3 types of Henry are all very, very different as is the ammunition they use.

online today!
Ken_19OP•May 6•Winchester, Virginia USA
I believe the sky screen chronograph I used is visible in the .45 Colt Winchester and S&W M-25-5 velocity tests on the same YouTube channel.
Post Comment
More Blogs
Your buttocks... Jimmy Kimmel’s Interview with Mike Lindell Packing my stuff down for the move Baking Skills Last week in my current municipality. The High School track meet at Grizzly Invitational in Utah is won by........... More Blogs
Ken_19 Blogs
Driveway photos Cat Sith or puckwudgie? ending of Fear the Walking Dead.. I have decided.. Covid updates Throwing this out there Another reason to avoid the dentist.. If anyone here is actually in the US Yellow Alert! A signal has been Detected So I want to write about Quantum binary Bytes sterile masks Braking news Run across the meadow Should Hong Kong be allowed to burn What Shi did... Best high risk job Handgun bullet penetration in wood I want to blog, but Nothing radioactive here More Blogs by Ken_19 (303)
Ken_19 Contributions
Forums (1,565) Blog (303) Blogs (303) Threads (83) Polls (34) Videos (7) Movies (6) Quizzes (4) Games (3) Music (1)

Create a Blog
"Are You a Pet Expert?"(meet us in the quizzes)
All Blogs Create Blog My Blogs Bloggers Comments