Yesterday from The Associated Press;

LOS ANGELES (AP) — A Los Angeles nun who took a vow of poverty has agreed to plead guilty to federal charges for stealing more than $800,000 to pay for a gambling habit, prosecutors announced Tuesday.

Mary Margaret Kreuper, 79, of Los Angeles was charged Tuesday with one count of wire fraud and one count of money laundering, the U.S. attorney's office said.

Prosecutors said that in a plea agreement, also filed Tuesday, the now-retired elementary school principal acknowledged that over a decade ending in 2018, she embezzled about $835,000 in donations, tuition and fee money from St. James Catholic School in the LA suburb of Torrance.

Kreuper, who was the school principal for 28 years, “controlled accounts at a credit union, including a savings account for the school and one established to pay the living expenses of the nuns employed by the school," the U.S. attorney's office said.

Kreuper could face up to 40 years in federal prison.

A statement from her attorneys said that Kreuper was “very remorseful for what happened" and had been cooperating with law enforcement and the Roman Catholic Archdiocese of Los Angeles.

Kreuper became a nun at 18, said the statement, reported by KNX-AM radio.

“Unfortunately, later in her life she has been suffering from a mental illness that clouded her judgment and caused her to do something that she otherwise would not have done," the statement said. “She is very sorry for any harm she has caused." 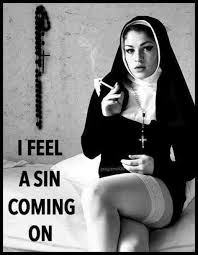 online now!
chatillion•Jun 9•Boca Raton, Florida USA
Credit where credit is due... 79 years old with a gambling 'habit' supporting so many casino workers!

Unfortunately, when the school checked into their finances, they found....nun.

"Twenty bucks. Same as in town."

JimNasticsOP•Jun 9•Kingston, New Jersey USA
My favorite joke involving a nun, is about a brothel run by the Sisters of Charity.
The guy pays to have sex with a nun and they tell him to go through that big door.
They close the big door behind him and he finds himself standing outside and sees a
sign hanging on the wall, "You have been screwed by the Sisters of Charity".

online today!
LaFonda•Jun 10•Irving, Texas USA
The nuns have all the fun.

JimNasticsOP•Jun 10•Kingston, New Jersey USA
Not all of it. There's plenty of fun to be had by all.
We all go through peaks and valleys.
Post Comment
More Blogs
Flight or Fight, or Evaluation of situation. chilling the obsessive compulsive urge to spread bad news Dear Man In Romania dear diary 6/11 Booted and kicked. More Blogs
JimNastics Blogs
The Delta variant of Covid-19 - perhaps the deadliest yet - on the rise Local Deer Friends How to really get her very angry He is BADLY missed by someone Charlottesville white supremacists lose appeal of conviction Kingfish I don't know if you have seen this funny show. If not, I recommend it. Photo - All 9 Nude The Absolutely Amazing Record Setting 7 time US Champion - "The Greatest of ALL Time" Yes ! Free annual State Park pass to all NJ residents, who are vaccinated Oregon GOP legislator thrown out of office unanimously (except for his own vote). Breaking News of Trump White House Criminality Uh oh ! Marty McFly Naughty Nun She Fills 2 Seashells at the Seashore Feels so good "Stable Genius", my azzzz. What a baffoon ! I love you more than you'll ever know (Blues) A terrific inside look at the reality of the network of scammers More Blogs by JimNastics (2,236)
JimNastics Contributions
Blog (2,236) Blogs (2,236) Forums (1,037) Threads (166) Movies (26) Games (12) Videos (7) Quizzes (6) Polls (2) Music (1) Poems (1) Poetry (1) Quizzes (1)

Create a Blog
4MaryB: "Im sorry but I love you "(meet us in the ecards)
All Blogs Create Blog My Blogs Bloggers Comments