California voters are heading to the polls on Sept. 14 to decide whether to remove Democratic Gov. Gavin Newsom from office.

online today!
Conrad73•Sep 14•Zurich, Switzerland
that's going to be another epic Fustercluck,judging from the Info coming out of Kalifornikate!

online now!
SwamieOP•Sep 14•Happy Valley, Pennsylvania USA
Most of the majority is under covid and would prefer to die with covid.. It's a win win for America. Third generation immigrants lack discipline and would need to be controlled.

California is the number 1 covid death infested State, should we say more...

If only they listen to Fauci ^^^ 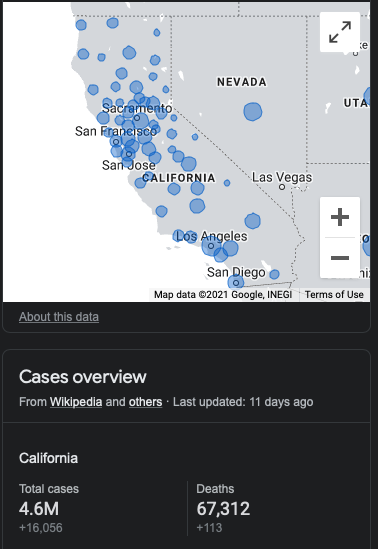 Official Residents spread the covid and choose to be at fault!!!

Democrats are what drives this virus and numbers don't lie and voters are showing this in real time stats....

I'm on the east side and I smell smoke.

BREAKING NEWS
Gov. Gavin Newsom avoided a recall, the A.P. reported, thwarting conservatives' attempt to seize on the pandemic to drive him out.

Voters affirmed their support for Mr. Newsom, whose lead grew insurmountable as the count continued in Los Angeles County and other large Democratic strongholds after the polls had closed.

By percentage, the number of deaths puts California midway between the highest and lowest states

Even the tri state area was on a colision course in the very beginning.. I never thought NYC would get out from leading the most deceased. I could drive about 195 miles and I would be right in heavy hit areas. We're not out of this yet by far... I predict a very dramatic increase in mortality before years end...

online today!
Orzzz•Sep 15•Portage, Wisconsin USA
Cali is the most screwed up state in the Union. Sane people are leaving by droves. They want to secede.. please cant we let them? I guess the leaches like their Gov. Tax high, charge high and hand it all out. Except what gets skimmed of course.

Create a Blog
Hans4711: "Real Cute 14"(meet us in the puzzles)
All Blogs Create Blog My Blogs Bloggers Comments