Such a weird tail

Five maybe six weeks ago myself and my eldest sister decided to pass the day away just by going for a drive and taking in the sights. It was decided she'd do the driving so she collected me in her car, which actually once was my mothers but left to her in the will, by mom.

When she pulled up outside, all I could think was the state of it, scratches and dents that were never there before, when I sat inside the condition and upkeep even worse

kinda jokingly I said you deserve to be haunted by mother, shameful how you've let it become when mother took such pride in keeping her Focus sparkling clean....I know she said, but in a day or two I'll give it a good cleaning, yeah like I've never heard that one before..

About three weeks ago, sis began telling me how she was being stalked by a wee bird....
Or perhaps I should say the Focus was

At the time I paid her no attention, after all it was only a wee bird, harmless little critters or so I thought.

Days passed and the stalking continued and she became more annoyed and desperate trying to put a stop to the bird and its weird behavior, so trying to humor her I asked what exactly is this strange behavior the wagtail is doing.... apparently it works in the exact same pattern several times a day.

when she looks out through her window it then hops up and down on the side mirror for a few seconds or so, then hops on the passenger door looks into the car when its chirping becomes louder...
As if it's giving out

then hops back on the side mirror again shitting and hopping, hopping and shitting, shitting like it it never plans to stop, which it does... afterwards it just fly's away.

As funny as it may sound it actually isn't....
Every time Sis wipes and cleans away the shoite, paint comes off, destroying mothers car even all the more

I've not written this blog to question Could I of put a bad eye on sis......
coincidence only, but at the same time it would make a person like me think

but seriously is there anything we could do to stop the wagtail and its weird behavior???

Help save moms car in other words 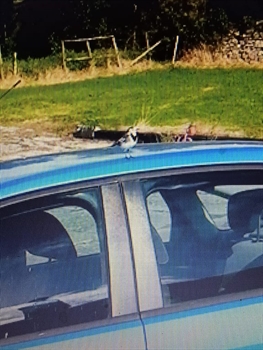 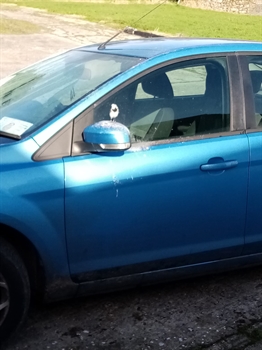 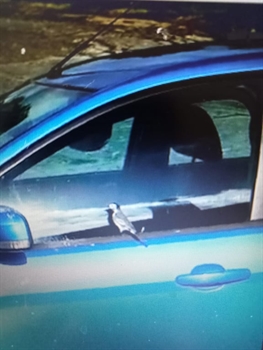 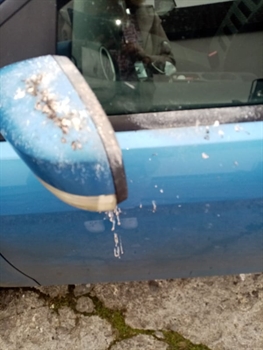 perhaps tether a cat to the mirror?
Reply
Report

cryptorchid●Easton, Pennsylvania USA
Oct 17, 2021●47 Blogs●2,234 Comments
#2
an owl decoy as a hood ornament will also do the trick
Reply
Report

quietly thought, well that's what you get for not taking better care of the car, then when I saw the damage its doing to the paint work... it's really not quiet so funny after all.

she does have a cat but she has no interest in the bird, has reversed the car just to see will it then use the drivers side instead, but nope. She's put bags on the side mirror but when she does that... it just shits on the passenger door instead.

Seems no getting away from the wag, wonder is this normal bird behavior

PedroFranco●Loule, Faro Portugal
Oct 17, 2021●99 Comments
#4
It can be annoying, I had one using my door mirror as a stool post. I started closing the mirrors and that stopped him,they might be waiting to catch spiders on the mirror. As for the window, birds try to chase other birds away so when they see their reflection in windows they try to chase that away too. This would apply to territorial birds and in the breeding season, so those would be males.
Reply
Report

this is Beetle Bird feeder.....attach it to car and hope the bird is German.....
Reply
Report

EXRED3●Northumberland, England UK
Oct 18, 2021●786 Comments
#7
yep shame for car paint and your mums legacy, some folk just do not care.

UnFayzed●Tampa, Florida USA
Oct 18, 2021●179 Blogs●2,300 Comments
#8
I think I would try a rubber snake to scare the bird. Other than that all you can do is laugh. If she cleaned the car every day she might not have such a problem. My heart would break knowing your Mom took care of it and your sis doesn't, that's a shame.
Reply
Report

raphael119●washington d.c., District of Columbia USA
Oct 18, 2021●29 Blogs●2,991 Comments
#10
A pair of Kingbirds nested next to the sliding glass doors on my back porch. They are tiny little bastard monsters. Apparently they hated me or else they saw their reflections and thought another bird was in the territory. The first day I thought it was a Canada Goose making the mess. I have never seen so much crap. Every morning. They will attack anything near their nest too. Anything.

Once I had a pigeon land on my car roof while it was parked and just sit there. I tried to shoo it and when I went inside it hopped, no flying, up my walk and spent the rest of the day and night huddled against the bottom stoop of my front door. When I opened the door next morning it cried out and flew away.
Reply
Report

after reading your post, I did suggest to her turning the side mirror in, she's tried that and when she did the wag takes his shitty business to either the roof or the passenger door, its better to have the mess restricted to one part alone.... by any chance was your car a bright blue shade?

Jim, If my mother did have anything to do with it.....
I'm sure she'd have my sis attacked and shat on instead

Thanks for the wee comic

Not sure what I'm missing with the German comment

Thanks for the suggestion but she's tried something similar.....
and no can do

Given this is going on a month now I myself think It's high time she buy a car cover, if she had any respect for its original owner she should.. 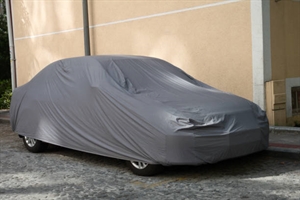 If the car wasn't once mothers pride & joy......
the bird could jump and dump on it morning noon and night for all the hell I'd car,
as you've said, it is a shame

strange though about the pigeon, by any chance did anyone have an accident/injury (self included) or a death anytime shortly after it? daft question perhaps but you know me

I've never had much incidents with birds, but this summer for some strange reason i saved a few Crows or ravens, which all ended up injured in my back garden

The last one I saved jumped onto my outstretched arm for a few minutes, was a little strange the way he just kept staring at me and just like that, he upped and flew away... no injured birds ever since.
Reply
Report

I believe I figured it out. Exterminators learned that they could get rid of huge pigeon flocks that adopted a roof or building by feeding the lead pigeon a hallucinogenic bit of bird feed reserved just for him/her. The flock abandons the insane weird leader and leaves the site to find a new leader. I think the pigeon was temp insane!!!

There had been a flock of pigeons hanging around a nearby mansion for a year or two!

raphael119●washington d.c., District of Columbia USA
Oct 19, 2021●29 Blogs●2,991 Comments
#16
As I guess you know, ravens and crows have an uncanny intelligence. I encountered a crow in the woods ages ago and we started a back and forth cluck cluck sound (I mimiced him to start and he almost fell of his perch). After 20 minutes I just left- weird. I later learned crows, esp. individual families and flocks, have a language that communicates all sorts of things. There is a movie about Paemon "Hereditary" that has that same cluck cluck sound as a motif all through it!:
Reply
Report

Maybe when he was rolling his eyes in the weird way that he did, he was gifting me with some of his intelligence, either that or he was telepathically stealing some of mine... what do you think

Orzzz●Portage, Wisconsin USA
Oct 19, 2021●62 Blogs●505 Comments
#18
Maybe the bird looked the car over. Saw what a state it is in, a rolling dumpster..and decided might as well add to the crap cause it looks like sis likes it that way.
Reply
Report

raphael119●washington d.c., District of Columbia USA
Oct 19, 2021●29 Blogs●2,991 Comments
#20
Kind of you to save them. Yeah, I've heard some experts talk about their eyes and their stare. The intelligence is almost palpable. Some songs from the great plague mention it too-- a bit darker though.
My Uncle had a strange bonding with a wren he fed in his backyard. I used to feed song birds birds daily on my porch but they were very shy.
Reply
Report

earlier this summer after 2/3 days of heavy down pours I discovered two drowned ravens in one of my plant pots, it was a new pot and empty as I hadn't yet gotten round to planting. After discovering them I felt bad, guilty even, if only I had thought to turn the pot upside down, as big as the pot was it wasn't wide enough for them to outstretch their wings to of been able to fly out...

Think it was more about not having anymore birds dying on my watch, in my space... plus I do have a cat

No truth then to cute little wrens being vicious?

I envy you, wish my grounds/gardens attracted singing birds more so than crows & ravens ...
lucky you

My car is black.

They're waiting patiently for you.

reasons why I asked.

But what are you like eh?
you leave devilish wishful thinking behind, then fly off wearing an Angels face

That angel is the nearest thing to a bird I could find.

But right you are, comment taken in a playful way

online today!
Swamie●Happy Valley, Pennsylvania USA
Oct 23, 2021●1 Blogs●3,110 Comments
#27
It might need a mate. I had two red cardinal here m/f and the female flew into the window down stairs and well it was gone.. The male was here daily admiring its reflection in window for months and left and returned the next year I think...
Reply
Report
Post Comment - Let others know what you think about this Blog.

Your daily dose of Donald...
Questionable Accounts
Riding Shotgun...
To dream or not to dream...
T&T Restaurant Week is in full swing...
As the Queen passes...
More Blogs
Meet the Author of this Blog

I am someone worth knowing but I'll leave you to be the judge of that... lol
It's hard to describe myself as in personality wise, where I may not be the best, I most certainly am not the worst, but I do tend to be more on the quiet side, more so the [read more]

Useless
Clotting V's Vaccines/ booster
Your hero's throughout your years...
An announcement to the Irish
What's wrong with people
A question or two about RAMADAM
Did I miss something???
If the dress don't fit
The soul keeper
Hallelujah
This blog has been inspired by boredom
This blog is NOT about what it might seem.
Such a weird tail
SUPER stupid
DEAR GOD
Something big in the air is coming...
39 years later...
Celtic style
My NICE blog
Instrumental music ....
More Blogs by CelticWitch64

Create a Blog
Post Comment back to top
Report Blogs that break rules, are offensive, or contain fighting. Staff may not be aware of the Blog Abuse, and cannot do anything about it unless you tell us about it. click to Report Blog Abuse »
If one of the comments is offensive, please report the comment instead (there is a link in each comment to report it).
optimisticme: "So mysterious is the night"(meet us in the poems)