In 1965, The Byrds hit the music scene with a cover of Bob Dylan's song Mr. Tambourine Man. Singer/guitarist Roger McGuinn was playing a 12-string Rickenbacker guitar that had a unique twanging sound. That was the small part as he wore some 'granny-style' sunglasses. The kids in my neighborhood have never seen those before. Naturally, we all wanted a pair!

Years ago, I saw some Roger McGuinn glasses at the flea market, but never purchased a pair. 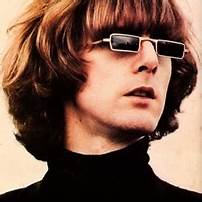 Okay, it's some 5 decades later... do I really need/want Roger McGuinn glasses?
Probably not. I'm holding our for a multi-prismatic pair like Nicolas Cage wore in the movie National Treasure.

So Boris has gone - a little fun at his expense
The results are in..
Save your breath
Justice Thomas made it know recently he would look at the lible laws if a case was brought .
WEAPONIZED IRS Agents???????WTF???????????
Edelweiss - Beginning [ IV ]
More Blogs
Meet the Author of this Blog

Daddy, PLEASE don't run again...
Anne Heche...
Smart Appliances...
He DID know his name...
Not an official vacation...
Mind control...
Finding love online...
Supply & Demand: Paying more than sticker price on a new car...
Florida Gov. Ron DeSantis and guns at public events...
FBI searches Donald Trump’s Mar-A-Lago Resort...
Should someone walk into your business wearing a ski mask...
Tip...
Traveler Meltdown at Customs...
Hmmm... let me think about this.
It appears that Alex Jones will be getting a DOUBLE WHAMMY...
Lamborghini crash...
aka: Stage / Professional names different than their own...
Shooting birds...
He loved her so much...
Wax Potted Pickups...
More Blogs by chatillion

Create a Blog
Post Comment back to top
Report Blogs that break rules, are offensive, or contain fighting. Staff may not be aware of the Blog Abuse, and cannot do anything about it unless you tell us about it. click to Report Blog Abuse »
If one of the comments is offensive, please report the comment instead (there is a link in each comment to report it).
"Warm Wishes "(meet us in the ecards)