Young Cassidy testified that “she was told” that as then-President Donald Trump was being driven back to the White House after the Jan. 6 rally that he demanded to be taken to the Capitol and tried to grab the steering wheel from a Secret Service agent.

Hutchinson said Trump got into “the beast” after his speech at the Ellipse on January 6 with the belief that he would be driven to the Capitol.

According to Hutchinson, who received this information from Tony Ornato, the Assistant Director for the Secret Service, Trump grew angry after he was informed that he was being driven back to the West Wing.

Hutchinson said Trump traveled in “The Beast” over to the Ellipse that day.

But Trump was in the Presidential SUV not “The Beast.”

Liz Cheney and Cassidy Hutchinson also got caught lying about a handwritten note that Cassidy took credit for writing.

Cheney actually displayed the note during Cassidy’s testimony and the witness said she wrote the note on January 6th.

online today!
Willy3411OP●Lawton, Oklahoma USA
Jun 29●1,321 Blogs●1,729 Comments
#1
Former Trump White House lawyer Eric Herschmann is claiming that a handwritten note regarding a potential statement for then-President Donald Trump to release during the Jan. 6 attack on the Capitol was written by him during a meeting at the White House that afternoon, and not by White House aide Cassidy Hutchinson, sources familiar with the matter tell ABC News.

At Tuesday’s Jan. 6 committee hearing, Rep. Liz Cheney displayed a handwritten note which Hutchinson testified she wrote after Trump chief of staff Mark Meadows handed her a note card and pen to take his dictation.

Sources familiar with the matter said that Herschmann had previously told the committee that he had penned the note.

“The handwritten note that Cassidy Hutchinson testified was written by her was in fact written by Eric Herschmann on January 6, 2021,” a spokesperson for Herschmann told ABC News Tuesday evening.

“All sources with direct knowledge and law enforcement have and will confirm that it was written by Mr. Herschmann,” the spokesperson said. 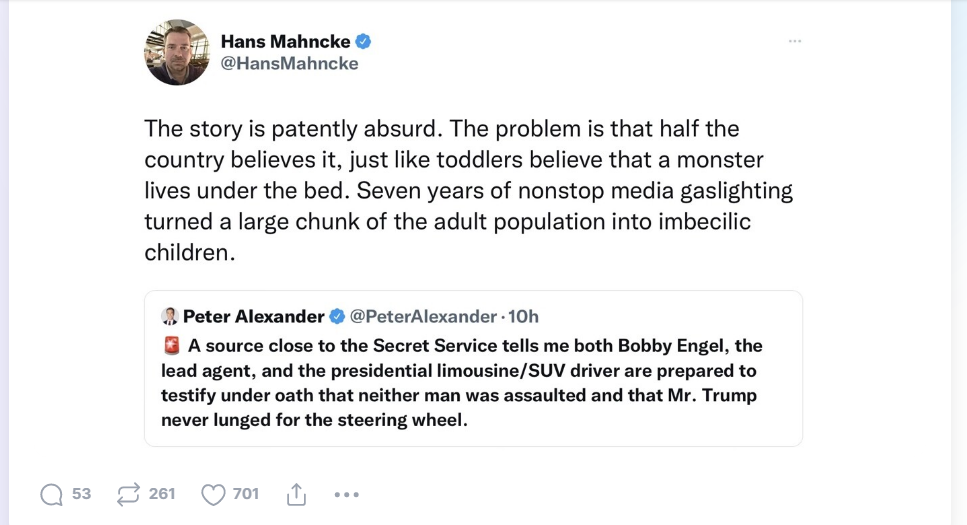 online today!
Grandsiozzie●Oslo, Norway
Jun 29●14 Blogs●2,411 Comments
#4
Exacty it's meant for the ones who don't know any better.
But as always teflon Don will walk not only cos his innocent but when the shit gets beyond the media circus into any serious courtroom all socalled evidence falls flat. Regardless, by then, the sheeple who wanna sniff the smoke to declare there must be a fire has been convinced and will vote D again.
So that is how that propaganda machinery works.
Reply
Report

Orzzz●Portage, Wisconsin USA
Jun 29●57 Blogs●463 Comments
#5
Blasted TV mumbles when they mention that she was TOLD by someone, not witnessed herself. So hearsay. Is she paid? Is she a liar? Is she one of those people seeking the lime light and making things up? Or is it like the parlor trick/schoolroom where kid one says a story plot and be the time the last person repeats it, bears no resemblance to one the first person told?
The old saw is never tell a lie because it is too hard to remember it. Especially when the person you say it about WAS THERE!

But, they keep trying to pull the wool over us.
Reply
Report
Post Comment - Let others know what you think about this Blog.

Happy Swiss Day
Live and learn - a Greek myth I had never heard
GOOGLE is celebrating the Steelpan...nice:)
Farewell to Judith Durham of the Seekers
WOW!...Last week was really my worst week this year (so far)...and I'm still recovering.
Edelweiss - CH I - The ALGORHYTHM [ III ]
More Blogs
Meet the Author of this Blog

Create a Blog
Post Comment back to top
Report Blogs that break rules, are offensive, or contain fighting. Staff may not be aware of the Blog Abuse, and cannot do anything about it unless you tell us about it. click to Report Blog Abuse »
If one of the comments is offensive, please report the comment instead (there is a link in each comment to report it).
Mermaidhair: "The Problem With Guns…"(meet us in the blogs)