This is why we need a southern border wall

California fentanyl bust: Feds seize one million counterfeit pills worth up to $20 million. 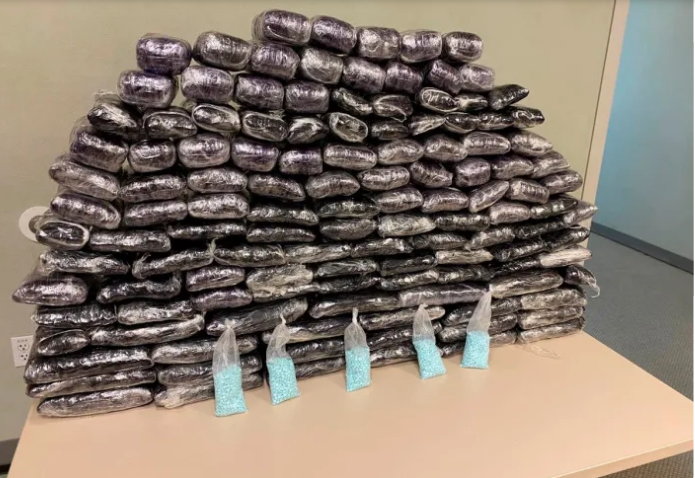 Law enforcement seized about one million counterfeit pills laced with fentanyl at a residence in the Los Angeles suburb of Inglewood last week, the DEA announced on Thursday.

The pills have an estimated street value of $15 to $20 million and are believed to be linked to a drug trafficking ring associated with the Sinaloa Cartel.

"This massive seizure disrupted the flow of dangerous amounts of fentanyl into our streets and probably saved many lives," DEA Special Agent in Charge Bill Bodner said in a statement.

Fentanyl, a dangerous opioid up to 100 times stronger than morphine, was detected in about two-thirds of the record 107,622 fatal drug overdoses last year, according to the CDC.

Drug dealers often lace fentanyl with other drugs, such as heroin and counterfeit pills, to increase their profits, according to the DEA.

"The deceptive marketing coupled with the ease of accessibility makes these small and seemingly innocuous pills a significant threat to the health and safety of all our communities," Bodner said. "A staggering number of teens and young adults are unaware that they are ingesting fentanyl in these fake pills and are being poisoned."

Los Angeles is a common stopping point for drug trafficking rings due to the city's proximity to the southern border and the many airports and freeways that make it easy to smuggle drugs to other destinations throughout the United States.

galrads●Dublin, Ohio USA
Jul 15●107 Blogs●1,174 Comments
#1
I wonder what the counterfeit pills are and if they might be in supplements can you test them for fentanyl besides illegal deugs?
Reply
Report

online today!
Draegoneer●Prudenville, Michigan USA
Jul 15●1,269 Comments
#2
there have been more than a few big busts this year concerning the drug.

can't say how many have been caught and released as far as illegal immigration either. doesn't cover up to a third that never get caught.

problem? even when we have some one willing to secure the border again, i don't see any peaceful, plausible, way to start cleaning up the streets and neighborhoods. it would take some pretty drastic measures and politics would have more field days just like they've doing since 2015.

sad to say, but i think we're stuck and things will only get worse, including the demand by users. don't worry. cartels and their dealers will do VERY well. maybe even gradually take full control of the u.s. in some areas if they haven't already.
Reply
Report

rizlared●Not in Cebu City, Central Visayas Philippines
Jul 15●80 Blogs●2,959 Comments
#5
No border in a country as large as the US, would stop the drug cartels. Only good intel will do that.

But well done with the shit stirring.

Judge Hands Trump a Huge Win
I love weddings! As long as they are not mine! :-)
skulduggery or suspicion in the chess world!?
NUCLEAR FUSION
Ol' Joe Attacks The Don/MAGA Political Opponents In Independence Hall Speech
Gender insanity.
More Blogs
Meet the Author of this Blog

Judge Strips DOJ Access to Mar-a-Lago Documents, Hands Everything to Reagan Appointee
Teen Accused of Driving Over Man in Wheelchair and Fleeing
Dow Jones Down 1,200 Points as Biden Celebrates 'Inflation Reduction Act'
Queen Elizabeth II, longest-reigning British monarch, dead at 96
Biden Explains We Can Only Come Together As A Nation By Exterminating The Republican Half
MUST WATCH: MAGA Republican from Ghana Now US Citizen Sends a Powerful Message to Joe Biden
The 'Extreme MAGA Agenda'
Do car commercials with police chase footage. That's how you know what the car is really capable of
White House Reporter Blows Up At Karine Jean-Pierre For Not Taking Questions
California is set to make history by banning sales of gas-powered cars by 2035. Can it deliver?
Bloviators in far away lands
Ugly woman with 2 kids
Living rent free
Trump supports New York Democrat for Congress
You wanna remake a network, you gotta break a few eggs…CNN fires Brian Stelter
10 Similarities Between The FBI’s Mar-A-Lago Raid And Spygate
Trust fall fail
Atlantic op-ed claims Catholic rosary has become ‘an extremist symbol’
Tim Tebow Has Helped Rescue Thousands from Human Trafficking, Inspired by What His Father Did
'The FBI Raid On Melania's Closet Was Justified,' Says Merrick Garland
More Blogs by Willy3411

Create a Blog
Post Comment back to top
Report Blogs that break rules, are offensive, or contain fighting. Staff may not be aware of the Blog Abuse, and cannot do anything about it unless you tell us about it. click to Report Blog Abuse »
If one of the comments is offensive, please report the comment instead (there is a link in each comment to report it).
sweetbutterfly48: "Mera Luna"(meet us in the puzzles)