In America, serving chicken usually has it cut in parts, severed at the joints. Drumsticks, wings, thighs. It has always been thus. Ask Colonel Sanders... A bucket of Kentucky Fried Chicken at a party and you would ask what part do you want?
Chicken stew and soup often had the bones removed so there were no surprises.
It wasn't until a coworker who hailed from Trinidad invited me to a Roti shop to have some traditional food from her country.
Simple description: a Roti is wrapped meat and potato pie with curry spice.
It didn't come with a warning that the chicken was randomly chopped and guaranteed to have sharp bone fragments! Trips to a Roti shop were limited. 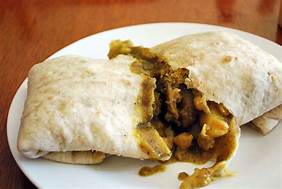 Next up... lunch at a Jamaican restaurant. They have chicken, rice, vegetable on a plate. Your chicken choice is dark meat or white meat. Expect it to be randomly chopped with a meat cleaver. At least with the Jamaican style chicken you can make out the bone fragments. 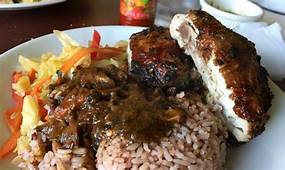 online today!
rizlared●Not in Cebu City, Central Visayas Philippines
Jul 16●80 Blogs●2,962 Comments
#1
Most of the Asian countries do not butcher meat as we do in the west. In many countries in Asia, flattening a dead bird is considered the best way to deliver a chicken.

Eating chicken in Asai is akin to eating fish, always a mouthful of bones

online now!
chatillionOP●Boca Raton, Florida USA
Jul 24●1,473 Blogs●4,294 Comments
#2
I had Chinese take-out last night and the lobster was randomly chopped... just enough where I could use a chop stick to get the meat out.
Reply
Report

Tanzila●City Of Joy, West Bengal India
Jul 24●82 Blogs●570 Comments
#3
Here in India , if you are eating or ordered food outside of home , from restaurant or food outlets , then nonveg items which includes chicken or mutton pieces , most probably will be content with bones .. Unless if you have clearly mentioned for "Boneless" items specifically in your order..

Also the chunks of meat will be mostly unevenly shaped and sized ..

online now!
chatillionOP●Boca Raton, Florida USA
Aug 7●1,473 Blogs●4,294 Comments
#5
Earlier in the week, I drove through a part of Fort Lauderdale where a few Roti shops were along the street. No time to stop.
Reply
Report

online today!
FargoFan●sydney, New South Wales Australia
Aug 7●500 Blogs●3,200 Comments
#6
@op doesn't your partner cook simple white chicken or soy chicken, cut it in half down the middle and then chop it with the meat cleaver? Plenty of splintered bones to be sure! Served with ginger and shallots Timeout for a Martin Gardner puzzle
I love weddings! As long as they are not mine! :-)
Falling into fall.
Divine intervention or just luck?
Edelweiss - CH I - The ALGORHYTHM [ XXXIII ]
T&T Restaurant Week is in full swing...
More Blogs
Meet the Author of this Blog

Create a Blog
Post Comment back to top
Report Blogs that break rules, are offensive, or contain fighting. Staff may not be aware of the Blog Abuse, and cannot do anything about it unless you tell us about it. click to Report Blog Abuse »
If one of the comments is offensive, please report the comment instead (there is a link in each comment to report it).
"PLAY NOW: Pyramid Solitaire"(meet us in the games)