Man Becomes Principal At Elementary School Where He Worked As A Janitor
September 1, 2022

Mike Huss started working at Ione Elementary School as a janitor. This year, he's the principal. 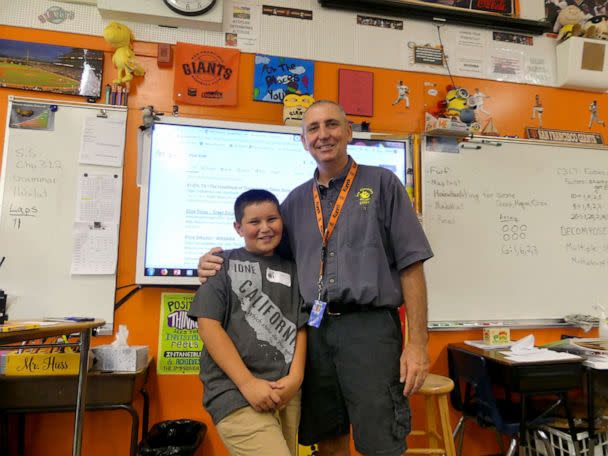 Huss was a student at the elementary school, and despite him saying that he never saw himself in education growing up, his peers and family believed otherwise.
After graduating high school, Huss became a janitor at the school. His coworkers, friends and family saw how he interacted with the kids and encouraged him to get his teaching degree. And he went for it.

"I wanted to show my young son, that if your dad can do this, if your dad can be the school janitor coaching youth sports, maintain a good grade point average and become a school teacher, you can accomplish anything in this life son," Huss said.
He was looking forward to teaching 5th grade again this year when he got the offer to be the school's principal. They reached out to me and said, 'We think you're the leader the school needs'. That was very humbling and it brings chills just to say it," Huss said.

Huss has only been principal for about two weeks but he already has a lot of support from his school district, his school staff and his young students.
"They give me hugs and say, 'You're doing a great job,' and it's really cute to see a first grader tell you that. 'You don't even know what I'm doing. But thank you very much for saying it.' But they see me out and interacting so I think to them, that's all that matters," Huss said.

It sure is Bcj. Makes me smile

Worse Than The Twins of a Gemini
Politician on a Lie Detector
Warning: Be careful my American Ladies
54 states
Lots of things happen with a full moon...
Trump's Twitter account has been reinstated
More Blogs
Meet the Author of this Blog

I am a mature, self-secure Christian woman who enjoys the simple things in life such as watching interesting movies and comedy shows, sharing in great food (whether I cooked or not, lol!), and good conversation.

Long Life
For those of us who would be rich, meet the "Richest man in the World".
Best Friends Win Million Dollar Lottery and Spread the Wealth in Hometown to Help Others...LOVE THIS
Extinct, or just 'hiding'?
Moving away
Finally! My cranky old bugger gets fixed…I hope
How much are you worth?
Counting Our Blessings
Making adjustments
Are you superstitious? Do you believe in things that bring good luck or cause bad luck?
I couldn't do what she does,.. (and certainly NOT for free).
MATING SEASON?
HOPE…overlooked and under-estimated
Some useful information...
Dancing away the blues…
Whatever you do, do it as though you are doing it for God (Colossians 3:23).
Suicide and the Self-preservation Instinct.
It's right around the corner.
World’s First Bed-and-Breakfast Powered By Electric Cars Offers FREE Luxury Nights....NICE!
Cranky old bugger!
More Blogs by Didi7

Create a Blog
Post Comment back to top
Report Blogs that break rules, are offensive, or contain fighting. Staff may not be aware of the Blog Abuse, and cannot do anything about it unless you tell us about it. click to Report Blog Abuse »
If one of the comments is offensive, please report the comment instead (there is a link in each comment to report it).
optimisticme: "The truth of it all!"(meet us in the poems)