Emoticons: How much can ya bear? 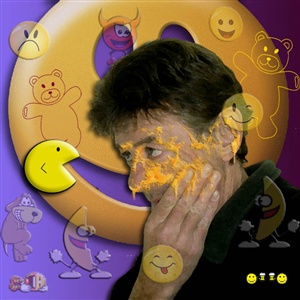 I've gotta say right now that sometimes I feel like getting a knife out of the kitchen drawer, grab my victim and then proceed to decapitate it. Not only that; I'm then going to rip the innards out, throw them in the air with glee and then stomp the remains into pulp.

I'm only kidding off course; it's more of a silly urge that comes over me every now and then. Like when I see half a dozen of those teddy bear emoticons, all lined up together, with the hearts flying out of them. Actually I just figured out that they are blowing kisses and not trying to rip their chests open like I would with that knife.

Now I'm not specifically picking on the bear here...... just it's annoying overuse; and that also applies to a few of its mates; the banana, the dog, the yah-hooer, the puker and the fluttering heart spring to mind. To me, the bear is an expression of sympathy; like when someone's dog dies.

Why do people have to use so many of them? Isn't one bear per post enough. Okay, maybe two bananas can dance together and the emoticon that rolls around laughing depends on the circumstances. 1= You're cracking up. 2= You just spat coffee over your keyboard. 3= You fell off your chair and broke ya leg!

The other day I saw these emoticons at the end of a post.

Sort of contradict each other, eh?

A ghost? A sheep? A cloud with legs?

And off course there is that puking emoticon. Don't think I've had a reason to use it yet; no matter how nauseating a blog or thread may be. It's enough to make ya sick!

There's no doubting the usefulness of emoticons..... when used for their purpose. i.e. Expression. Especially in this environment where English is not everyone's first language and translations can be misinterpreted. And some people do get a bit excitable when they communicate.

Anyways, I've put away the knife..... but I've got the air freshener and spare shirt handy. Just in case that teddy bear pukes on me!

carobnjak3●melbourne, Victoria Australia
Aug 11, 2010●568 Comments
#2
Woowww,
I was waiting for that knife to go down before I posted

I'm innocent,I just discovered how to use them tonight.

BillyFatwasOP●South Coast, New South Wales Australia
Aug 11, 2010●5 Blogs●653 Comments
#3
Ina. It was only the other day that I realised what all those parentheses were about. I haven't a clue what they actually mean so......

Can ya please use the CS emoticons that I can understand!

That's perfect! You look like ya been doing it all your life.

pomana●christchurch, Canterbury New Zealand
Aug 11, 2010●2 Blogs●27 Comments
#5
yep billy lol.
dont like them, dont use them ... and i think its a gay yeti dancing!!
Reply
Report

cameltits●ford, Kuwait
Aug 11, 2010●68 Comments
#8
Billly, it is Alfi who got you so worked up. I would say keep the knife in your hand, wait, and let him come back. We need some resolution. And you don’t need to stomp on his remains and innards; everything about him is already pulpy.

alfibarios●aegion, Peloponnese Greece
Aug 11, 2010●772 Comments
#9
billy my mate
emoticons is fun ,even the puking one.but if u feel so bad ,keep ur knife shapred ,cause i have some tities to operate.

if u need an explaination on emticons u can ask me ,sending a mail.the dancing sheep reminds me always our beloving smittens .r.i.p.

ben999●dungarvan, Waterford Ireland
Aug 11, 2010●12 Blogs●584 Comments
#10
i agree billy, fine when used to stretch a point, but overuse dose grate a little, you see the problem with these emotions, is that some people have emotional problems, ill try to hatch something new, just for you billy.

alfibarios●aegion, Peloponnese Greece
Aug 11, 2010●772 Comments
#11
ben except the funny of emoticons ,sometimes they help u express ur feelings ,better than writing some 100's words.dont u think???

ben999●dungarvan, Waterford Ireland
Aug 11, 2010●12 Blogs●584 Comments
#12
no alf ,because if the emotion was available for me to post, for one particular girl last night, to express how i felt, i would have been thrown off the site this morning.

CT, why don't you write a blog about the proper etiquette and use of emoticons? I'm sure you would have an opinion or two.

but go on buddy ,after all this is a DATING site.and people date to fulfith their needs emotionally or more.

BillyFatwasOP●South Coast, New South Wales Australia
Aug 11, 2010●5 Blogs●653 Comments
#22
Thanks Pomana. I'm glad ya mentioned the other blogs because I seldom think of looking to see if anyone may have added some comments.

Ya planted your uncle's dope plants in the front yard? Bet they never reached maturity!

CT... Alf's use of emoticons is nothing compared to some I've noticed. At least he saves them for the end...... and not between every second word.

I've been waiting for our friend Fieldir to show up in ya blog. I see he's relocated to Portugal so he's probably busy moving house. He never uses emoticons. Actually, I was starting to suspect he had an alter ego here who completely flooded her posts with the annoying things. I may have been wrong on that one.

All we need now is some custard and it will be a nice little......

I shall resist from using THAT emoticon!

BillyFatwasOP●South Coast, New South Wales Australia
Aug 11, 2010●5 Blogs●653 Comments
#24
Alf mate. Yeah... now that you mention it, Smitten was one of the few who used that thingo quite regularly.

So, just for Smits..

alfibarios●aegion, Peloponnese Greece
Aug 11, 2010●772 Comments
#25
thanks mate
dancing banana is representing me the best.
just dont be so against my emoticons.i put them at the end of my comment and always have something to tell.

Nah. I'm feeling good today so I'll give ya a

Ben. You may be right. I'm encouraging members to break the rules here. i.e. keeping it to 3 emoticons per post.

Awww... to heck with the rule book!

ben999●dungarvan, Waterford Ireland
Aug 11, 2010●12 Blogs●584 Comments
#27
the women are convinced we are all gone mad, whose to say there wrong. they are going to brain us. if we dont get back on track to romance,

BillyFatwasOP●South Coast, New South Wales Australia
Aug 11, 2010●5 Blogs●653 Comments
#28
Thanks Hugh. I was wondering what the reference to aliens was about...... and then I saw Alf's blog.

Hi Maybe. Tell that to the Emoticon with the weak stomach. Think I might get on to CS Admin and see if they can supply some barf bags for those vile little spewers.

And Sherwood.... hang on while I grab my sunnies...

You're lucky Jack's gone MIA. He would have really chewed ya head off!

ben999●dungarvan, Waterford Ireland
Aug 11, 2010●12 Blogs●584 Comments
#30
i think so billy, its been that kind of a day i cant remember, jases, ive been feeling unwell all day with stomach cramps,

Janmei●Shenzhen, Guangdong China
Aug 11, 2010●97 Blogs●405 Comments
#31
These emotions can sure add some lovely and lively atmosphere to our blogs or comments, if we can use them suitably but not inundantly.

Hmm. Sounds more like a bad case of butterflies in there.

BillyFatwasOP●South Coast, New South Wales Australia
Aug 12, 2010●5 Blogs●653 Comments
#33
I agree wholeheartedly Jan. They add character to a post; but going overboard with them can make it look like a sloppily arranged Christmas tree.

As I'm typing this I am munching through a packet of jelly babies. That cloud with legs wouldn't look out of place among them.

and not going to use it anymore yay:
Reply
Report

Timeout for a Martin Gardner puzzle
Edelweiss - CH I - The ALGORHYTHM [ XXXII ]
Celebration of Life...
Relationships
When you find a life partner...you inherit..
The Chinese Mid-Autumn Festival aka Mooncake Festival...
More Blogs

Toads, dung and coffee beans
Emoticons: How much can ya bear?
Even ugly dogs will grow on ya.
A friend for life...... I hope!
Me confess? Never!!!

Create a Blog
Report Blogs that break rules, are offensive, or contain fighting. Staff may not be aware of the Blog Abuse, and cannot do anything about it unless you tell us about it. click to Report Blog Abuse »
If one of the comments is offensive, please report the comment instead (there is a link in each comment to report it).
bappy14: "elements"(meet us in the quizzes)