A Great Artist in Subway.

Keith Haring developed a love for drawing at a very early age, learning basic cartooning skills from his father and from the popular culture around him, such as Dr. Seuss and Walt Disney.

He move to New York City and enrolled in the School of Visual Arts (SVA). In New York, Haring found a thriving alternative art community that was developing outside the gallery and museum system, in the downtown streets, the subways and spaces in clubs and former dance halls. Here he became friends with fellow artists Kenny Scharf and Jean-Michel Basquiat, as well as the musicians, performance artists and graffiti writers that comprised the burgeoning art community. Haring was swept up in the energy and spirit of this scene and began to organize and participate in exhibitions and performances at Club 57 and other alternative venues.

As a student at SVA, Haring experimented with performance, video, installation and collage, while always maintaining a strong commitment to drawing. In 1980, Haring found a highly effective medium that allowed him to communicate with the wider audience he desired, when he noticed the unused advertising panels covered with matte black paper in a subway station. He began to create drawings in white chalk upon these blank paper panels throughout the subway system. Between 1980 and 1985, Haring produced hundreds of these public drawings in rapid rhythmic lines, sometimes creating as many as forty “subway drawings” in one day. This seamless flow of images became familiar to New York commuters, who often would stop to engage the artist when they encountered him at work. The subway became, as Haring said, a “laboratory” for working out his ideas and experimenting with his simple lines.

Between 1980 and 1989, Haring achieved international recognition and participated in numerous group and solo exhibitions. His first solo exhibition in New York.was held at the Westbeth Painters Space in 1981. In 1982, he made his Soho gallery debut with an immensely popular and highly acclaimed one-man exhibition at the Tony Shafrazi Gallery. During this period, he also participated in renowned international survey exhibitions such as Documenta 7 in Kassel; the São Paulo Biennial; and the Whitney Biennial. Haring completed numerous public projects in the first half of the 80’s as well, ranging from an animation for the Spectacolor billboard in Times Square, designing sets and backdrops for theaters and clubs, developing watch designs for Swatch and an advertising campaign for Absolut vodka; and creating murals worldwide.

Throughout his career, Haring devoted much of his time to public works, which often carried social messages. He produced more than 50 public artworks between 1982 and 1989, in dozens of cities around the world, many of which were created for charities, hospitals, children’s day care centers and orphanages. The now famous Crack is Wack mural of 1986 has become a landmark along New York’s FDR Drive.

Haring was diagnosed with AIDS in 1988. In 1989, he established the Keith Haring Foundation, its mandate being to provide funding and imagery to AIDS organizations and children’s programs, During a brief but intense career that spanned the 1980s, Haring’s work was featured in over 100 solo and group exhibitions. In 1986 alone, he was the subject of more than 40 newspaper and magazine articles. He was highly sought after to participate in collaborative projects ,and worked with artists and performers as diverse as Madonna, Grace Jones, Bill T. Jones, William Burroughs, Timothy Leary, Jenny Holzer, Yoko Ono and Andy Warhol. By expressing universal concepts of birth, death, love, sex and war, using a primacy of line and directness of message, Haring was able to attract a wide audience and assure the accessibility and staying power of his imagery, which has become a universally recognized visual language of the 20th century.

pinkcoralOP●Naha, Okinawa Japan
Nov 10, 2010●29 Blogs●528 Comments
#1
Thank you pexiel,
the lastnite you remind me of his art what you posted sis JDEDD's blog.
that music and animation brings me back old school,and today I watched his pictures on TV by chance.

pinkcoralOP●Naha, Okinawa Japan
Nov 10, 2010●29 Blogs●528 Comments
#2
Haring's bold lines and active figures carry poignant messages of vitality and unity. His legacy made an impact on late 20th century art and grants us all a vision for the future.
Reply
Report 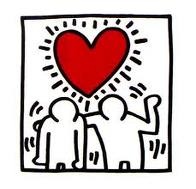 How much time did you need to write, all the above text ???

gotitall●Dungarvan, Waterford Ireland
Nov 10, 2010●1 Blogs●626 Comments
#8
never liked grafitti, or the desecration of public, or private property with sray paint, but he did some wonderful work in later life, much to his credit, it is to be admired.
Reply
Report

pinkcoralOP●Naha, Okinawa Japan
Nov 10, 2010●29 Blogs●528 Comments
#9
Thank for coming Doctor Ben.
Right. he was illegal to draw in paper panels in the subway.
his idea and imagination was inspired other artists indeed.
I think he was also a great parformer too.
PS: he was a gay.

jeddah12●singapore, Central Singapore Singapore
Nov 10, 2010●36 Blogs●1,055 Comments
#10
HE IS A WELL KNOWN ARTIST AND ACHIEVED A LOT ON HIS LIFE,,,HE WAS GOOD IN ALL HIS WORKS ..its a good thing that you can still remember this people pink...good blog and thanks for sharing it,i never read about him well..

pinkcoralOP●Naha, Okinawa Japan
Nov 10, 2010●29 Blogs●528 Comments
#11
Thank you very much sis Jedd.
the great poeple has anxious,pressure,....etc but he kept grasp white chalk to describe his passion on papers.
I think he was a sensitive and brave person.
he created unique,drastic his original art people ever seen before.
after he passed away he went to the heaven to met his boyfriend,still painting in the sky now.

What fun! South West airlines' Hawaii in-flight surprise.:-)
STOCKINGS, TIGHTS OR TATTOOS OR NOTHING?
Edelweiss - CH I - The ALGORHYTHM [ XXVIII ]
One trick pony
Niagara Falls to illuminate in red, white, black on Independence Day...Nice:-)
GEOTHERMAL ENERGY why not?
More Blogs

MAKE A WISH!
My Santa gave me this!
What are you doing for a stress release?
Must be kidding!
Helloooooooooooooooo!
The song of giving thanks and feasting.
VIVA Beaujolais Nouveau 2010.
we are peanut???????????
Unthinkable.......
Happy.
A Great Artist in Subway.
Treasure.
Thank for your smile.
Internet Reaches Top of the World.
final answer?
Trick or treat.
Blood and Moon.
What do you want to be reborn next?
Moon viewing
I'm home.

Create a Blog
Report Blogs that break rules, are offensive, or contain fighting. Staff may not be aware of the Blog Abuse, and cannot do anything about it unless you tell us about it. click to Report Blog Abuse »
If one of the comments is offensive, please report the comment instead (there is a link in each comment to report it).
The_Professor: "Maths"(meet us in the puzzles)