So, ok I admitted that I'm smoker, even on my profile stated that I smoke. So what?! Some of these online people I've chatted been telling me that I have to stop and it's bad for my health yada yada...
make it a big deal as if I'm stealing or robbing a store for smokes.

First, if I want to stop smoking , its because I want to. Not because of you telling me what you think I should do with bad habit of mine.
It's not Class A-1 felony ffs, so chill!

Second, ur reason of quitting smoking got nothing to do with me, so why trying shoving down my throat to why I should quit,... for u? Unless I come to you for support and help, then that would be different story.
But, well done for u that u've managed to stop ur bad habit of smoking.

Third, mind you, it's my own money that I WORK FOR that I'm burning, not yours!

And if you don't like smokers, then don't hang out in area which clearly says " SMOKING ROOM, SMOKING AREA" and then you nag about the smell of smokes on you, or start coughing like u choke on a hairball and giving the shitty look while sitting around smokers.

Everyone has an opinion, first most say, omgggg its gonna kill you, well could a yellow bus if I don't look where im crossing, 2ndly, omgggggg 2nd hand smoke

but yet you take seconds when you do my ex

3rdly, I basically say, you don't like that I smoke, I could change that, but you cant change you ugly, mind your own business, please and thank-you, then I light up another one

twazzle70•Jun 25, 2014•THE GORGOYNES......, East Riding of Yorkshire, England UK
I quit the smokes a few years ago but have no problem at all with others smoking,,none of my business,,i remember being in a bar on holiday enjoying a few polite ciders,i sparked up a cigarette and within a nano second a lady a table or two away started coughing like she,d swallowed a wasp or suchlike,,id not even inhaled any of the said smoke myself,,and she was definetely coughing because of my cigarette,,,i have family and friends who smoke,,theyre choice entirely and none of my business,also my choice to be around them or not whilst they participate...

but smokers being ostracised left right and centre...public facilities ban smokers prevent you from doing your legally rightful practice of doing your own thing..yet abusers of drugs, sniffing obscene substances is ok in the presence of the righteous ones who deplore the smokers ????

I would prefer to spend my time in the presence of smokers or tolerant non smokers...but the rest of the population can swivvle on the middle finger

swivel on the middle finger

havent heard that one for sometime,,a quality gesture my friend,,also "spin" on the middle finger was a firm favourite...

It is amazing what memory recalls when excited...

Those who kiss a smoker is like kissing a horse

fallen_wolfOP•Jun 25, 2014•Batam, Riau Island, Riau Islands Indonesia
@ twazzle : see, there's should be more people like u, butter and sted with "mind your own" attitude thing. then people prob be get along great.

@ sted : I agree with ur statement...especially the last paragraph

fallen_wolfOP•Jun 25, 2014•Batam, Riau Island, Riau Islands Indonesia
@ bunga: ok im a bit lost connection between smoker and kissing horse, but erm.., confucio need to kiss a horse first before made such comment why?

The horse mouth taste terrible, so is the mouth
of a smoker

Zeurich•Jun 25, 2014•unknown, Utrecht Netherlands
I have no comment about smokers it is simply not allowed here in Public. They have special cabins. That calls cigar clubs.

Smart what insect repellent has to do with smoking?

Enjoy your smoke guys I am hungry I am going to eat spaghetti,,

titsy•Jun 25, 2014•Medan, North Sumatra Indonesia
I quit smoking a long long time ago but I have no problems with smokers.
I have many.friends who are smokers.
But if they dovisit me at home, they are not allowed to smoke in my house....
They cando.so on the terrace........

youmeyes•Jun 25, 2014•altoona, Wisconsin USA
Guess you don't think of what your smoking does to others. Or don't you read. Second hand smoke causes cancer and kills others. And I don't have to go to a smoking area to breath it. Your walking past me outside can give me your second hand smoke.
So don't say your smoking does not affect others.
I personally don't care if you smoke, I just don't want you giving cancer to others because you smoke.

val53•Jun 25, 2014•cape town, Western Cape South Africa
I personally don't smoke in public, and not when I have people around who does not smoke,,,,people get cancer whether they around smokers or not.

teddybeerke88•Jun 25, 2014•assenede, Oost Vlaanderen Belgium
hiya fallen, aren't they annoying? I hate that kind of people always preaching about how bad smoking is, but reality is their has been not a single objective study to really proof the harm smoking and surely not what 2nd hand smoke does to someones health. Like all things in life, to much will harm you, but drinking toooooo much water can also kill a person. Doesn't mean it hurts if you don't overdo it.. so keep smoking and ignore those ignorant brainwashed idiots.

youmeyes•Jun 25, 2014•altoona, Wisconsin USA
Teddy just because people do not agree with smoking it is no reason to say they are ignorant brainwashed idiots.

@ Tits: When I visit friends house. If i see the owner arent smoker, I dont smoke either (even when im getting a cold turkey haha) to respect the owner. But, it normally just be a short visit for me haha.

@ Val : I hear ya, thats how i feel. I mean my social life pretty much inactive other than at work. Got back from work there only be me and laptop, cigs and coffee. This 3 are like essential thing for me

@ You: have u heard that the chance of getting hit by car are higher than catch a cancer as so call second hand smoker ?

@ Val: true that. next things they gonna blame smoker too for skin cancer, cause the smoke touching them?

@ Ted: You said it, and cant top that up 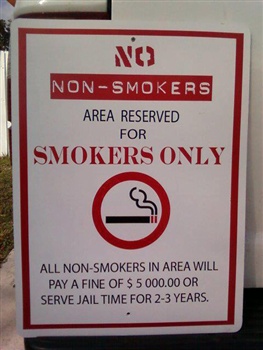 kariena•Jun 26, 2014•Alberton, Gauteng South Africa
Maybe people should focus more on drunken sods getting in their cars and killing innocent people instead of someone sitting at home enjoying a smoke while watching a movie.

teddybeerke88•Jun 26, 2014•assenede, Oost Vlaanderen Belgium
youmeyes, i don't consider all people who are against smoking such ways.. only the ones that just repeat the crappy reasons that gouverments and anti-tobaccolobby spread. Cuz like i said, their is still not a single objective study that proofs any of these so called harming effects. Furthermore, their have been some studies indicating benificial effects of smoking on alzheimer and other brain related illness. But ofcourse those facts never reach media because it doesn't suit the leaders their coverup.

iwil55•Jun 26, 2014•Centennial, Colorado USA
A friend once said "I can appreciate a good o*al fixation"...
Thus, I like a girl who will smoke the "presidential cigar", but she should look better than Monica.

guysimple•Jul 4, 2014•delhi, Delhi India
I liked what you wrote.
I have only one bad habit now its smoking.
In past, I was heavy drinker. I used to drink everyday. I had many friends, were drinker too. Some people used to tell me" you must stop drinking it will harm your health in your old age" and some wanted I shouldn't stop and some dont.

I thought myself, I must stop it now and I stopped by that day. Now I feel happy and satisfied. My friends meet me they never believe that this guy can leave drinking. I stopped it because i it was my wish. I heard of my heart.

Now I have this bad habit of smoking. Yes its true non-smoker dont like passive smoke because they read and heard that passive smoking is more dangerous.

Some people always like to give advice because it doesn't cost them. we know smoking is injurious to health even a small kid knows. if we are addicted we cant stop it by hearing people advice. We like thus we do and when right time comes we will stop

kaetchenvonhn•Jul 4, 2014•Neckarsulm, Baden-Wuerttemberg Germany
No one can force you to quit smoking, but if the people you talked about are living far away from you, why did it bother you? Here, the common place where you can smoke are outside: there is only a few of privilege area called "smoking area" for smokers available. Almost none.

I think it's our responsibility to take care of our environment including the health of other people surround us, so I didn't see it wrong if people you talked to tried to give you some advice. I tried to understand that the urge of smoking, once you're addicted, is very hard to resist, but that could not be excuse why smokers have to be understood when they're smoking around. Instead you were expecting non-smokers to show their tolerances towards you smokers, it was you who needs to tolerate others' health around you before you smoke around them.

"Some people always like to give advice because it doesn't cost them. we know smoking is injurious to health even a small kid knows. if we are addicted we cant stop it by hearing people advice. We like thus we do and when right time comes we will stop"

An example of a comment from an ignorant person. Will you have the gut to pose such similar comment to pregnant women, couple who wait to have kid for a long time, people who suffers from lung cancer or emphysema? A small kid would not know the impact of smoking unless you tell them the truth, instead of luring them to smoke.

The smell of your breath, your clothes, your hair, even every part of you from meters away after you smoked could not lie and was not made up by us non-smokers, so stop whining on non-smokers. If my purse or my shirt getting the terrible smell from your smoke, would you be ready to take the responsibility to pay the bill of my shirt's laundry afterwards? If not, then think to smoke wisely.

Smoking or other addictive habits that have possibility to harm your or others' health should have been viewed carefully, not carelessly.
Post Comment
More Blogs
A reprieve.... How is it going? Electric cars are a joke. Christmas Joke Nature and nurture.... Crowned... More Blogs
fallen_wolf Blogs
workmates To My Friend.... To My Friend.... Must watch! Smoking... OMFG.... Things some people hate about some people Back to work.. Some of good quotes II Daredevil Kitty Seeks male companionship... dogs humor Not Too Eggciting Peeves that dogs have about humans Talking dogs Dog Movies Some good quotes.. Top 10 guiltiest dogs Smartass.. About a dog... More Blogs by fallen_wolf (22)
fallen_wolf Contributions
Forums (963) Videos (34) Blog (22) Blogs (22) Quizzes (13) Games (6) Threads (3) Groups (1) Music (1)

Create a Blog
rama1987: "Seeking for honest relationshipt that ends with life partner"(meet us in the profile reviews)
All Blogs Create Blog My Blogs Bloggers Comments