Figured I'd share some work pics. Two to be precise. Here is where I do temp work in a 'materials handling capacity'. Said terminology covers a lot of ground.

These are paper rolls used in printing. Books, magazines, stuff like that. We get several 18 wheeler loads of them every day. Each roll usually weighs about 2,300 lbs. On the other side of the rolls are other aisles of rolls. This is one of the wider paths through them. Wide enough for forklifts to zip down. There are some spaces between the stacks wide enough to squeeze into. Sometimes at the end of the space there may be a little alcove where people go to hide. Not supposed to, but humans do stuff like that. Kind of dangerous to squeeze into one of those places though because forklifts race down both sides in both directions and careen around corners and some of the bottom rolls bear collision marks and sometimes when nudged the whole column can shift sideways or even topple one of the top rolls. When you see or hear that happen, run away. Sometimes a bouncing roll can also bring down the next stack, then you have a whole bunch of one ton bowling balls dropping out of the sky and going every which way. You learn to keep one eye on the top rolls when you hear, but don't see the forklift on the other side and also to keep an eye out for a safe spot to dodge big rolling things. 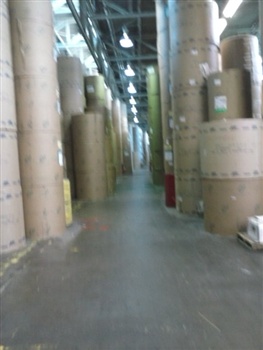 This is a typical parts rack (in the back behind the white crates). We have lots of them scattered about. During the day, two or three times a day really, someone will have to go up one of them and get a replacement part for some press or another. Once upon a time the dream was each press or embossing machine or laminating machine would have it's own parts rack near it. Then they moved the machines and stuff for anything can now be found just about every where except the rack it is supposed to be on. Ideally to get a part you ride a scissors lift up to the shelf you want. However, not only is there a problem there (busted lift), there would in this case be no capability for the lift apparatus to get close. An alternative when a part is on a skid is to use a forklift to get the skid. Again, there may not be enough room. The solution is some person plays Jungle Jim and climbs the shelving to see if the needed part is where it is supposed to be. We will figure out how to get it down after we confirm the needed part is really up there. Could be it is on one of the other shelfs on the other side of the warehouse. :) 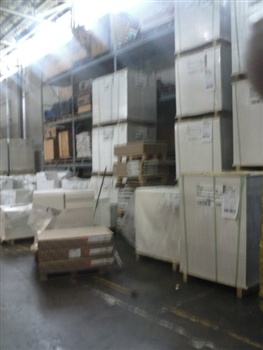 Ken_19OP•Jun 28, 2014•Winchester, Virginia USA
LoL, Nam sometimes we get so many of them there are 4 or 5 trailers told go away and come back later because we have no more room for them. This aisles stack is short cause the roof there is low. I have seen them stacked 6 or 7 high and when a fork lift smashes or backs into the bottom roll and the stack wobbles and the top roll moves out a foot, everyone near just holds their breath.

namaron•Jun 28, 2014•Seekonk, Massachusetts USA
i used to picked them up on staten island...10feet tall sometimes..even those small ones showing there are heavy...theyre mostly used to make cardboard....on staten island they take bales of scrap paper..and thats what they end up with..what you have there..

123butterflies•Jun 28, 2014•saskatoon, Saskatchewan Canada
Wow could you imagine if that went up in flames

Ken_19OP•Jun 29, 2014•Winchester, Virginia USA
LoL, there is a sprinkler system. Smoking is prohibited in there of course. Recall the occasional alcoves between the stacks I mentioned. They come and go as rolls are added or removed. Sometimes cigarette butts have been found on the ground where the alcoves were. There are chemicals too, some flammable. I suspect the local FD would just evacuate the area and wait a few days before doing more. I know that would be my approach to those stacks of rolls and tanks of chemicals.

Nam, yeah even the smallest rolls can go 800 lbs. They usually put them on top of the bigger rolls. The red in the photo is a roll that was so badly damaged by an earlier collision that a (red) metal support shield has been placed to buttress the support of the upper rolls. We have many like that. Especially at aisle intersections where one speeding forklift will dodge a forklift going the other way. Bump. The yellow is a (cracked) plastic buttress around one of the roof supports. Usually both the red and yellow shields bear evidence of many subsequent collisions.

Ken_19OP•Jun 29, 2014•Winchester, Virginia USA
Thinking it through.., for the ceiling mounted sprinkler system 50 feet up to self activate, the flames would probably already have to be 20 feet high at least. Might be a little late by then.

Zeurich•Jun 29, 2014•unknown, Utrecht Netherlands
What are those cylinders?

Post Comment
More Blogs
Trump Budget complaints vs Trump Budget requests The trials and tribulations of being in a lockdown in the UK. I saved my sisters life tonight 23 That is me PRIM!!! SMILE a lively time on the blogs More Blogs
Ken_19 Blogs
Yellow Alert! A signal has been Detected So I want to write about Quantum binary Bytes sterile masks Braking news Run across the meadow Should Hong Kong be allowed to burn What Shi did... Best high risk job Handgun bullet penetration in wood I want to blog, but Nothing radioactive here The question with Epstein is of Exodus 20:18 And all the people saw.. Game of Thrones, S 8 E 3 (spoilers maybe) So yes, the mustache is returning Secret job openings in the US. So yesterday was interesting, kind of, maybe.. So it is a boring night I have been a More Blogs by Ken_19 (295)
Ken_19 Contributions
Forums (1,565) Blog (295) Blogs (295) Threads (83) Polls (34) Videos (7) Movies (6) Quizzes (4) Games (3) Music (1)

Create a Blog
manu1010: "I swore i'd never love again "(meet us in the ecards)
All Blogs Create Blog My Blogs Bloggers Comments