So was most of the population of the DDR 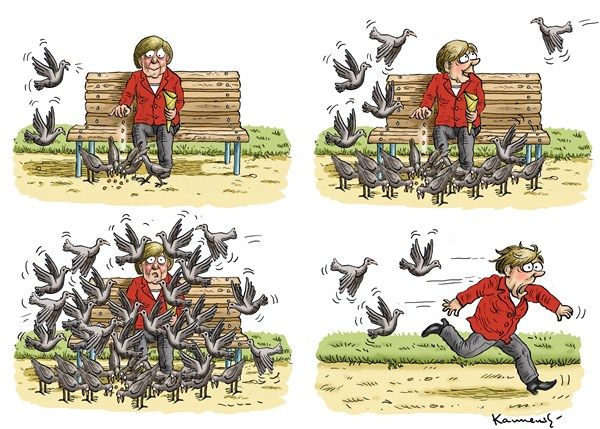 Germany is a well-ordered machine and there are few people who want to change the chemistry. Compromise and long-term thinking feature more in the societies which lost and were hammered by the war, instant gratification and pass the buck come from those spoon-fed as children by the spoils of war(the over 50s of Britain and especially America)who voted for blind greed in the 1980s as selfish yuppy parasites.
------ This thread is Archived ------
#10
Mar 14, 2018 6:44 AM CST Angela Merkel & A Fourth Term

online today!Conrad73Zurich, Switzerland289 Threads 6 Polls 91,564 Posts
Conrad73Zurich, Switzerland91,564 posts
ChesneyChrist: Germany is a well-ordered machine and there are few people who want to change the chemistry. Compromise and long-term thinking feature more in the societies which lost and were hammered by the war, instant gratification and pass the buck come from those spoon-fed as children by the spoils of war(the over 50s of Britain and especially America)who voted for blind greed in the 1980s as selfish yuppy parasites.

BERLIN (Reuters) - German lawmakers voted on Wednesday to re-elect Angela Merkel as chancellor for a fourth, and likely final, term that may prove her most challenging yet as she takes charge of a fragile coalition with her personal standing diminished.

Lawmakers voted by 364 to 315, with nine abstentions, in favour of re-electing Merkel, a humbling start as the coalition of her conservatives and the centre-left Social Democrats (SPD) has 399 votes in the Bundestag lower house of parliament.

"I accept the vote," a beaming Merkel, 63, told lawmakers before being sworn in by Bundestag President Wolfgang Schaeuble.

In office since 2005, she has dominated Germany's political landscape and steered the European Union through economic crisis.

But her authority was dented by her decision in 2015 to commit Germany to an open-door policy on refugees, resulting in an influx of more than one million people that laid bare deep divisions within the EU over migration.

While also being locked in a trade stand-off with the United States, Merkel must now juggle competing domestic demands from within her coalition.

Her conservative CDU/CSU alliance only turned to the SPD to prolong the 'grand coalition' that has governed Germany since 2013 out of desperation, after talks on a three-way alliance with two smaller parties collapsed last November.

"It will not be an easy coalition, we have some difficult tasks ahead," said Volker Kauder, parliamentary leader of the conservative bloc.

Ministers, younger and more diverse than the last cabinet, take up their posts almost six months after last September's national election in which both coalition partners lost support to the far-right Alternative for Germany (AfD).

"I have the feeling that nothing good is going to be done for the country in this legislature period," said Alice Weidel, the AfD's leader in parliament. "It will probably be Angela Merkel's last term and at some point it will be enough."

Abroad she faces the trade tensions with Washington, pressure from France to reform Europe, and from Britain to stand up to Russia.

President Frank-Walter Steinmeier said it was "high time for a new government" to go to work.

"It is good that the time of uncertainty is over," he said at a ceremony with Merkel's cabinet ministers.

Merkel's spokesman said she would head to France on Friday to discuss bilateral, European and international topics with President Emmanuel Macron.

On Tuesday, Merkel's spokesman said she spoke by phone with British Prime Minister Theresa May and condemned a nerve agent attack on an ex-Russian spy in England for which May held Moscow responsible.

Despite that, Russian President Vladimir Putin congratulated Merkel on her re-election in a telegram and emphasized the importance of further developing bilateral ties, the Kremlin said.

At home, the pressure is on both sides of the coalition to deliver for their rank and file. Their deal includes a clause that envisages a review of the government's progress after two years, giving each the opportunity to pull out then if it is not working for them.

Fault lines have emerged in the new government even before its first cabinet meeting, with tensions evident over the sequencing and extent of reforms.

The SPD only agreed to ally with Merkel after promising a list of distinctive policies after the last four years in coalition damaged its standing among voters.

CossackCatSomewhere, Maryland USA578 Threads 45 Polls 12,494 Posts
CossackCatOPSomewhere, Maryland USA12,494 posts
Conrad73: https://www.swissinfo.ch/eng/weakened-merkel-begins-fourth-term-beset-by-challenges/43971118
Oh this I have to read.
I wonder what these challenges are? Death threats, from the 5 unelected EU officials, if she isn't a good soldier and following orders to replace Europe with Africa, fast enough?

Communist the ferkel who will attempts to tottaly destroy not just Germany but whole Europe.
Germany is American puppet and what I don't get it, how Trump doesn't have any influence on her politic, where she's getting her sick communist guidence ? The NWO puppeteer !
------ This thread is Archived ------
#19
Mar 17, 2018 5:12 AM CST Angela Merkel & A Fourth Term

People in Glasshouses shoudn't throw stones
Only dictstors can't be questioned!
Lefties Hitler and Leftis Merkel!
Why not questioning destraction of Europe where Makel leads the way to hell.
Many Germans I spoken too are not happy with Makel and you're the rare 'diamond '
Are you sure you're not African refugee behind your photo.

People in Glasshouses shoudn't throw stones
Germany was only paying 3% of their NATO dues, under Obamanation. The USA is paying the rest. (Only 2 countries pay their dues in full. The USA pays the rest)
Trump got her to admit in a White House press conference, that she will now pay 4%. And still she cried poor... on international TV

This Thread is Archived

This Thread is archived, so you will no longer be able to post to it. Threads get archived automatically when they are older than 3 months.

« Go back to All Threads
Message #318
More Threads
F the royals b/s thet n their ilk keep us poor n in chains/wake up usa,etc. How to Bring a Mafia Don to Justice! FED was put here to ruin us to derfdom 1913 plot to enslavement/no jobs n robots replace us/purge! Let me think about it! Enough is Enough! Are you a good cook? Storm On Back in my day.. ATTENTION; ANOTHER FAKE PROFILE early to bed and early to rise More Threads
Report threads that break rules, are offensive, or contain fighting. Staff may not be aware of the forum abuse, and cannot do anything about it unless you tell us about it. click to report forum abuse »
If one of the comments is offensive, please report the comment instead (there is a link in each comment to report it).

back to top
jagtom: "Beef Sunday Dinner forYou"(meet us in the forums)