The Argentinian football legend died at home, his lawyer said, just three weeks after having surgery on a blot clot in his brain.

Maradona won the World Cup with Argentina in 1986, having knocked England out of the tournament in a match which saw him score the infamous 'Hand of God' goal and another - widely considered to be one of the greatest goals of all time.

Regarded as one of the greatest players of all time on the pitch, his life off the pitch was equally notorious - amid battles with drug and alcohol addiction.

leonardo5Central region, Santa Fe Argentina50 Threads 15 Polls 506 Posts
leonardo5Central region, Santa Fe Argentina506 posts
bodleing2: Three days of mourning announced in Argentina.
I don't deny that Maradona was a football player of excellent level.
But that was all. His personal life was disastrous. Several women, lately younger than their own daughters, children recognized and unrecognized everywhere, drugs, alcohol, addictions.... I think he is far from being considered a god, as some call him.
Reply
#18
Nov 27, 2020 7:54 AM CST Diego Maradona dies age 60. 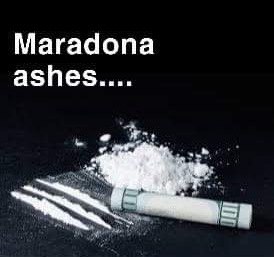 Reply
Post Comment - Post a comment on this Forum Thread
More Threads
Was released in theaters Ohops TODAY'S MANTRA Time is running out --------> Would you? Is it wrong This is not a food or music thread.. Which would you prefer to date? How many here today resemble this ? If it looks and tastes like a prawn.. More Threads
Report threads that break rules, are offensive, or contain fighting. Staff may not be aware of the forum abuse, and cannot do anything about it unless you tell us about it. click to report forum abuse »
If one of the comments is offensive, please report the comment instead (there is a link in each comment to report it).

Post Comment back to top
cupotea: "Dia dhuit all. so ya think you know me huhh?"(meet us in the quizzes)