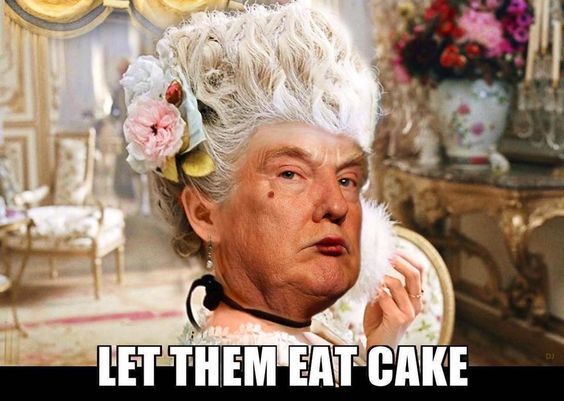 online today!rohaanCoos Bay, Oregon USA220 Threads 12,589 Posts
rohaanCoos Bay, Oregon USA12,589 posts
Butin: queen of France. Antoinette..
I just love history— especially the decades before The French Revolution, and through the end. Particulars: The story, as journaled by LouisXVI’s valet, et al, is that when the first ( lighter) March on Versailles was getting close to the palace, Marie Antoinette asked her personal guard why the people were so angry and hostile. “It is because they have no bread”, he answered. “Well, then let them eat cake”, was the queen’s reply. Now, most people don’t “ get” the double entendre here. In 18th century France, “ gateau” meant cake, AND meant the blackened, hard burnt crust and debris in an oven. ( hence the English term, “ it’s caked on”... meaning hard to clean off).. so, ( if one accepts that Marie Antoinette actually said the quote— there are conflicting stories..however, a few written references indicate she said something like it..) then the people interpreted it as her telling them to eat oven crud.

( I worked with a nurse from France who filled me in on lots of little details in French vocabulary. Another tidbit from this era— as dauphine, Marie Antoinette out- ranked the king’s mistress, duBarry. She despised her, even. She refused to address her until finally ordered to do so. Her famous quip to the hussy was, “ I’ll y a beaucoup de monde a Versailles aujord hui.”
(There are quite a lot of people here today” —— but what she was ACTUALLY saying was, “you make one too many at my house”.
Reply
Post Comment - Post a comment on this Forum Thread
More Threads
Do you have a nickname for your organ? Islanders’ Paradise Worst Food Abuse and abusive behaviour.... Again Are you getting a covid-19 shot ? Which One of these topics makes you MOST Uncomfortable to deal with ? Cute Cats Profile liked but not visited? Fooling Yourself More Threads
Report threads that break rules, are offensive, or contain fighting. Staff may not be aware of the forum abuse, and cannot do anything about it unless you tell us about it. click to report forum abuse »
If one of the comments is offensive, please report the comment instead (there is a link in each comment to report it).