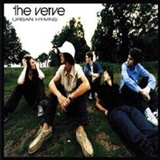 The Verve Urban Hymns Music
by The Verve

UnknownOPAug 2009
I just like every single song on this album!

keep on pushin cause we know its there!

LikethesunshineDec 28, 2014
I am crazy about this song since I was young. It's so great from beginning to the end of the song. The melody sounds really fresh and awake!

Perhaps you weren't convinced of the Verve's staying power until recently. Before the release of Urban Hymns, skeptics wondered if they could ever match the explosive power of their earlier dedications. In 1995, most critics dismissed their offerings of the time as vapid, romantic excursions. To their credit, the Verve have sustained their shadow rock legitimacy while introducing string arrangements, piano fills, and slide guitar. Nowhere are these stirring traits more obvious than in the epic single "Bitter Sweet Symphony." Laying it on thick throughout the rest of the album with painfully engaging ballads, the Verve have crafted their most accomplished album to date, proving the longevity of their cultural resonance. --Lucas Hilbert