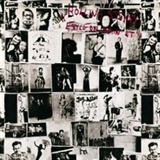 indoremanOPNov 2011
I’m very surprised this 1972 classic album hasn’t been posted on here before. I’ve always preferred original releases to greatest hit compilations but sadly many albums include poorer ‘filler’ tracks. I feel this is one of the better ‘Stones’ albums and is quite an achievement for double album.
It’s the one I listen to most often and contains my favourite single ‘Tumbling Dice’…. If only ‘Brown Sugar’ was on it too! (But it does include ‘Happy’, ‘Rocks Off’ and ‘Rip This Joint’)

According to Wiki it’s now generally regarded as the best 'Stones' album… evidently I agree with this.

lipseeNov 5, 2011
I,m not a big stones fan ,,but I have to say "Brown Sugar" is also my fav,but Tumbling Dice is not far behind,,,regarding greatest hits,,,I have to agree!!! tracks /singles taken out of context do not sound half as good..

Super deluxe edition includes bonus CD, bonus DVD, double vinyl LP, four postcards, 64 page cloth bound book featuring the rare and acclaimed Dominique Tarle & Ethan Russell photographs, Exile tour photographs, first time published memorabilia collection and the story of Exile. 2010 reissue of the classic Stones album housed in a super-jewel case (to complete 'remasters' box set). Regarded as one of the greatest albums in Rock 'n' Roll history and one of the most defining of the Stones' catalogue. Upon its release more than three decades ago, Exile On Main Street innovatively wove varying musical genres, instruments and even artists into a compelling rhythmic masterpiece. The original 18-track double-album was recorded in various stages at multiple locations, including Olympic Studios in London, Keith Richard's mansion Nellcote in France, and in Los Angeles where the literal Main Street influenced the album title. These atypical circumstances surrounding the recording process greatly affected the album's outcome which was highly reflective and influenced by the sociopolitical turbulence that marked the late `60s and early `70s.