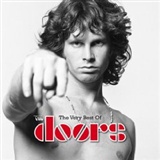 Isis88May 4, 2009
You don't even have to experiment with anything; the music is intoxicating enough and is spellbound. I like the movie depiction.

lipseeMar 1, 2011
Great Music,and not a bad movie!!!
Post Comment - Let others know what you think about this Music

Rhino's celebration of the 40th Anniversary of the Doors spectacular 1967 debut continues to break on through with an unprecedented two-disc, career-spanning collection that spotlights the legendary band's powerful mix of music and mysticism. The most comprehensive 2-CD Doors set ever compiled, the anthology presents dramatic new 40 Anniversary mixes by the remaining Doors and Bruce Botnick, the band's original engineer and producer. Drawing essential hits and favorites from all six studio album recorded by Rock and Roll Hall of Famers Jim Morrison, Ray Manzarek, Robby Krieger, and John Densmore, the title also features several songs previously unavailable on any U.S. compilation as well as choice rarities from various sources.

You can add a video of the above Music from youtube:
Click here to Add »
Report Abuse for this page, if inappropiate
Music on the site is added by members. You can add Music too. Click here to add one.