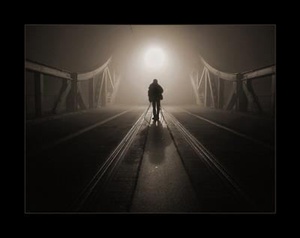 Was in the wrong place at the wrong time
To be in the bank the day they held it up
Now I'm no hero, a coward if truth was known
So I kept a low profile, stayed at the back

Maybe that was my mistake, I was too obvious
Or so they thought, as a gun pointed at me
In fright I dropped straight to the ground
Was the second mistake I should not have made

I heard a sound, was loud in my ears
It was the sound of a handgun firing
At first I thought that I was all right
Then agonising waves of pain hit me

Screaming I heard loud and clear
Was wondering, then realised it was me
All around me the light was fading
Was this the end of life for me

Time had passed, it might be centuries
Or it might be just the beat of a heart
There I stood, I don't know where
But with nothing but fog all around

I stopped in fear but the light never moved
Steadily it blazed like a guiding beacon
What on the other side was waiting for me
Heaven or Hell, which would it be

How long I stood there I have no idea
The concept of time was meaningless here
My future, I knew, was over there
A heavy sigh, I set my feet towards the light
~ ~ ~ ~ ~

I leave it to the reader as to what he found over there or possibly another chapter at a later date.

Poems entered on these pages are copyrighted by the authors who entered them. They cannot be reproduced without the author's written consent. © Copyright 2001-2021. All rights reserved.

swade777Grants Pass Area, Oregon USAJul 19, 2012
Steve, this is a clever introduction for a story that could continue to grow into a complete manuscript! I'm in! When's the next installment? I hate being left ... wondering

morgen90210singapore, Central Singapore SingaporeJul 19, 2012
Nice ...and many thanks my friend steve.

Poetnumber1St James, Port of Spain Trinidad and TobagoJul 20, 2012
This is another brilliant piece of works,you sure have the art of story telling

paloma66Manukau, Auckland New ZealandJul 20, 2012
This is lovely Steve waiting to read the continuation.

Ladybee42East Liverpool, Ohio USAAug 18, 2012
Very interesting Steve, I like to think you were happy enough on the other side of the bridge.

steve1223OPadelaide, South Australia AustraliaAug 23, 2012
Thank you Ladybee42 .. would like to think that I will be happy on both sides of the bridge

Post Comment - Let others know what you think about this Poem
More Poems
Winter's Last Stand Why you ghostin? A Fallen Leaf Feeding the Cockatoos For we are Legion Haiku 1 (diamonds in the snow---) More Poems
Report Abuse for this page, if inappropiate

Stats for this Poem

Create a Poem
FargoFan: "Where'er you walk"(meet us in the blogs)