StaffConnecting Singles38 Top 10 Lists
Staff (38)
Oct 2016
in Fashion
2,674 views
0 comments
In the past, punk style was considered too radical for most people. Shaved, spiked, wildly colored hair, makeup colors Mary Kay never even dreamed of, skin covered with crazy tattoos and tons of 0heavy jewelry that involved a lot of skulls, lightning bolts, and safety pins. Only the most fringe, independent women dared to punk out in public dressed like a punk rock music fanatic.

Times have changed! Starting out in the movies, pop music, and on TV, then spreading through culture all the way up to high fashion, punk has finally trickled down to the mainstream. Here are 10 popular punk trends taking even the most conservative, staid women by storm.
1 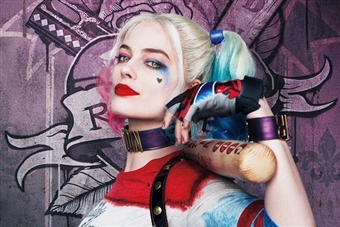 The movie Suicide Squad has brought this wild comic villainess into the mainstream, with her literally "insane" smeared clown makeup and hot, two-tone pigtails. One company has even released a set of platinum bleach, pink and blue hair dyes in one box so getting Harley's look is easier than ever. Several businesses that specialize in pop culture clothes, make-up, and accessories have begun to carry costumes and everyday wear inspired by punk jester Harley!
2 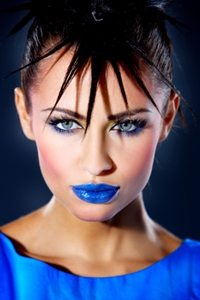 Halloween and punk shows used to be the only place you saw people wearing blue, green, black, and a rainbow of neon lipstick. Now major makeup manufacturers commonly release uncommon colors as part of their lines, and magazines are printing instructions on how to wear them.
3 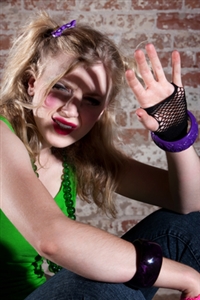 Big shoulder pads, huge hair, heavy makeup. You might do an 80's double-take walking down the street of your hometown when you run into someone who looks like they walked straight out of a Flock of Seagulls video. Google it if you don't know what that means.
4 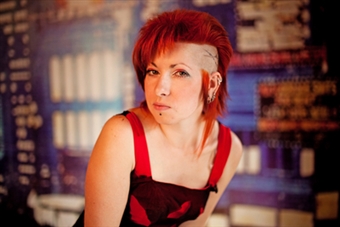 Shaving your head was once reserved for girls covered in tattoos, wearing safety pins for earrings, and sporting other piercings in places that made your skin crawl. You may notice that all of those things are now commonplace to see, and so is shaved hair. Even a conservative bob can be shaved in the back or under the main hair close to the skull. The asymmetrical bob is more and more commonly seen with the short side shorn entirely. Some people shave it up for fashion, some for comfort, but a fuzzy cranium isn't just for the mosh set anymore!
5

Not-Your-Mon's (unless she was a punk!) Haircolor 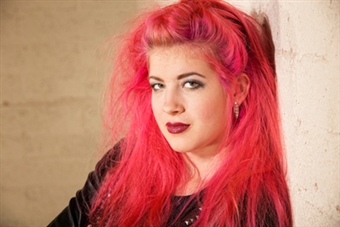 Harley Quinn's two-tone tails are only the beginning. Hot colors right now include silver, grey, muted blue, and every shade of purple and rose under the sun. Not to mention pastels and brights. With some effort, the ombre look that has transferred to hair fashion can be achieved. With brush-in, spray, gel, and other temporary or semi-permanent color, more women are experimenting with the wilder side of tresses than ever.
6

The Comeback of Biker Leather (again) 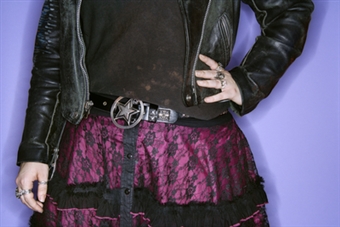 The biker jacket never really seems to go away. Anyone who was of age in the 80's or 90's probably has one in their closet somewhere, and depending on their past level of punk, it may be studded or covered with pins or have a rebellious stencil on the bad: skull and crossbones or punk band or grunge patches are common. Well, ladies, pull them out, or hit up your mom or big sister, and ask if you can have it. The neo-punk look means leather, leather, leather, and the biker jacket is a staple.
7 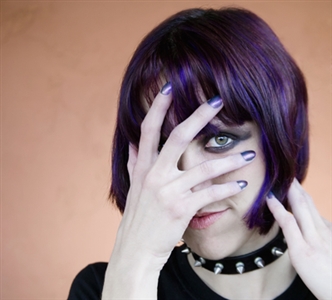 Speaking of leather, one of the most ubiquitous parts of punk style includes jewelry with spikes and studs: dog collars, wrist and ankle cuffs, even clothing. Black and silver is the way to go, but any color is fair game. Even high-end jewelry and accessory designers are releasing punk styles in sterling, platinum, and gold.
8 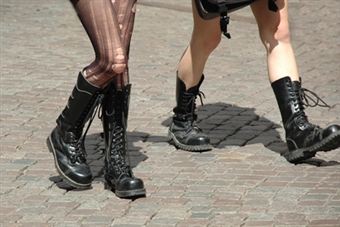 Doc Martins are another piece of fashion rebellion that never goes out of style. The company carries dozens of styles, colors, and patterns, fit for any taste. Paired with boyfriend jeans or a mini-skirt with torn or fishnet stockings, anything goes with combat-style boots.
9 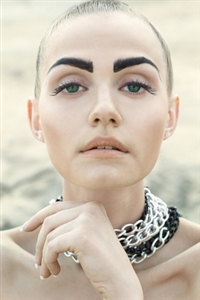 A heavy chain necklace with a padlock pendant, safety pin earrings, bracelets, anklets, or just hanging off shoelaces, what punks once created with hardware and sewing items, accessory companies are creating out of fine metals.
10 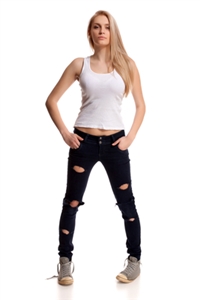 The torn-kneed jeans look is another that stays in style. Destroyed jeans are even part of most designer denim collections these days.
This article doesn't even touch on emerging punkish subcultures like pastel goth, nu-goth, pop-punk, happy punk, and others that soften the edges of traditional punk and goth, without entirely losing their edge!

Post a comment now »
More Top 10 Lists
MY TOP TEN TUNES 10 qualities about a man that good women like The Top 8 Job Applicants the Federal Government wants to hire now My top 10 best Countries to live in the World Favorite books My Favorite Dogs Movie Must Haves.... God Has Given Us My top ten movies.. Top Ten Dog Breeds for First-Time Dog Owners More Top 10 Lists

Create a Top 10 List
jeddah12: "MY FAVORITES COUNTRY SONGS"(meet us in the top 10 lists)