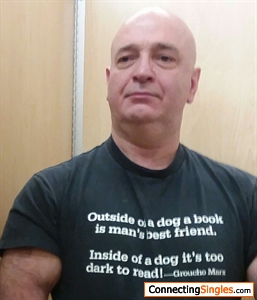 One-line messages are lazy & insincere. If you show you didn't read my entire profile, I'll be annoyed.

I'm not too weird, just weird enough; part serious, part rotten little kid. I have a good head on my shoulders, which is good because, if it were elsewhere on my body, it just wouldn't look right. I'm strong mentally & physically, fiercely loyal, a take-charge man, and extremely chivalrous. I'll open your door, carry all heavy stuff, be strong for you, & protect you. I'm not into 1-night stands/chasing skirts when in a relationship. I've composed hours of classical music performed publicly. If you're not DEEPLY into classical music, we're not compatible. For a living, I teach. I've been skydiving & bungee jumping b/c I don't want to regret risks not taken. You don't have to do them, but accept that I do sometimes.

I've fulfilled all my s*xual fantasies, & want to keep fulfilling them with someone I love, and who loves me. I'm politically aware, but NOT politically correct. I'm vegetarian-- a cruelty-free diet is a must. Innocent animals should not have to die just to be delicious to you. I loathe the Tea Party. Conformists, conservatives, and religious folks (I gave up religion for Lent) go away. Deist are OK, theists are not. I do 200+ voice impressions. Yes, really. Order now, operators standing by.

If I clicked "like" on your profile but did not write to you, it's because your settings did not allow my message. Please write to me.

You're NOT right for me if you
•smoke
•take drugs
•nag
•would even consider wearing real fur or be otherwise cruel to animals
•don't like animals
•are not into hairy guys
•believe in astrology/other brainless superstitions, including religion
•are too much of a feminist. I favor gender fairness, but I’m sick of being treated like the enemy. I won’t apologize for being masculine. Feminists tell men to get in touch with their feminine sides, but I only do that to give it a firm spanking like the dirty little slut that it is.
•regard your match's income a factor in your attraction to him. I don't sell flowers at intersections, but want me for who I am, not what I own.

Miss Right's sexually uninhibited, passionate & willing to try new things. I’m sexually dominant (but never abusive), so she likes being sexually submissive. Enthusiasm is more important than experience; it’s the best s*xual technique. I also think bisexual girls are HOT, although I'm 100% straight.
Also, honesty in relationships should be carried to extremes. In relationships, I DON'T LIE, EVER. I ask the same from you. Lies in relationships are like boogers in salads: the acceptable number is zero. If you write to me, I'll reply even if we're not a match because not doing so is extremely rude to someone who's sent me a message. I want similar courtesy from you.

I'll believe in a magical invisible man in the sky only when there's evidence.

95 Forums23 Blog Comments10 Tags7 Photos4 Blog4 Blogs2 Quizzes1 Threads
Send a message
Send Flower Report This Profile
Do We Connect? Similar Members
Contact Requirements View All Photos (7)
Back to Top
ConnectingSingles does not do background checks and does not manually screen every profile.
To Report Abuse: If this profile or the behavior of the member is inappropriate, click here to Report Abuse »
17th_Lancer: "The Wolf"(meet us in the poems)