SailGuy: MUST continue with an adventuresome life. 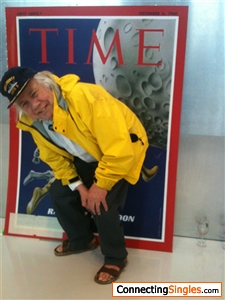 SailGuy for you
Email Me

My age is chronological. Healthwise I am below 70 y.o., only medications are eyedrops, my vision is 20/20 without glasses. Yes, still able (without medications) to do all I did at 40 y.o. it just takes longer now. That can be good.

Born in Chicago w/very loving, functional, middle class family. Always doubted the god thing, even at 5, out of respect for my parents and a very functional minister, continued church until my parents died (I was ~40).

Graduated H.S. in Lake Geneva, college UWMadison, WI in 1960. Moved back to Chicago, where I worked fire protection engineer, instrument tech. and then engineer on large centrifugal compressors, traveling over the Pacific, So. & No. America. Wonderful, exciting job put me working 3 weeks at the most, 1 week at home. In ~2009, 8/40 hrs became too much. The wonderful people from CEO's to Chinese labors, all wonderful except a few Americans.

One major part of life was, with all the travel, divorce turmoil, etc. raised Del (my youngest son) from the age of 5 y.o. as a single parent with sole custody. Jokingly, "The nut did not fall far from the tree.".

Met some famous people along the way, but blew it when I had the chance to meet Dr. Ferdinand Porsche (I was not political in 1959). I've tried to live an exciting life. Spent 18 months in Lompoc Federal Prison, when I was denied conscientious objector status in 1953. Now I weekly protest all wars, trying to show people who has started wars. This is done at Pioneer Square Portland every Friday.

Other quest, to get out of the cold winters (yes, summers are gorgeous), maybe spending summers here and winters in Chile or Argentina. Or Sweden summers, driving to So. Italy in the winter. "If you don't have a dream, how you gonna make a dream come true?"

I spent the holiday 31/12/1999 at the Copa Cabana in Havana with about 2 weeks there. Like heaven. I would love to spend at least winters there now if possible.

In one word "COMPATIBLE". Near my age, near my health, loves adventure, loves male affection, being a wind sailor would be the greatest. Must be independent of children, have above average I.Q. close to Mensa. Honesty, transparency, co-verbal qualities which I hope I too have. Corresponding of course to begin with we will see/share these things. Hugs, davewesterlund

White/Swedish/ but NOT White Supremacist.

Retired engineer: Supervised work on centrifugal air compressors throughout Latin American, No. America and Pacific Basin. Hablo un poco Espanol. Very much enjoyed my work and wonderful people I met in all the foreign countries. Still love to tra

Send a message
Send Flower Report This Profile
Do We Connect? Similar Members
Contact Requirements
Back to Top
ConnectingSingles does not do background checks and does not manually screen every profile.
To Report Abuse: If this profile or the behavior of the member is inappropriate, click here to Report Abuse »
galrads: "Under Pressure"(meet us in the forums)