Billkip: Looking for some one to share time with and enjoy. 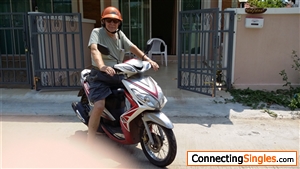 Presently I'm sitting in Thailand writing this. I am even proud of being able to say, yes I am a Marigold Hotel person.

Six years ago I was trying to understand how I was going to reinvent my life between retirement and the so called "Great Recession". After a year of research I decided to take a one month exploratory trip to Chiang Mai Thailand. I doubt that I would have taken any initiative to make any such exploratory trip, is it wasn't for the collapse of the US economy. I came up with the inspiration to buy a house in Cottonwood and rent it out during the snow bird season. The income pays for my living expenses in Thailand for about 10 months. Does this say anything about me or my honesty?

I will be returning to Cottonwood in late August, and then return to Thailand in November. However, I will be returning next April for the final time. I would like to develop a good friendship or such. Sorry words escape me right now.

Have I given you some talking points? And so what really brings you to this wed site?

I am a retired school based Speech Pathologist. Between that and some of my own retirement plans I have a somewhat pleasant income. But I am not wealthy and I have no inclinations towards the conservative side of the fence - not Republican (especially because of 2008), not Mormon, no where near today's right wing. Oh yes, I can not listen to Fox. I believe in the heart of people, not the hate mongering that's going on.

I want to find some one I can enjoy myself with and relax with. Being able to communicate, share knowledge, and laughs would be very helpful. Since I don't fit into the "norm" of relationships I don't know what to say, except that one of those "norm" relaionships wouldn't work with me.

Send a message
Send Flower Report This Profile
Do We Connect? Similar Members
Contact Requirements View All Photos (2)
Back to Top
ConnectingSingles does not do background checks and does not manually screen every profile.
To Report Abuse: If this profile or the behavior of the member is inappropriate, click here to Report Abuse »
Willy3411: "Why men shouldn't write advice columns"(meet us in the blogs)