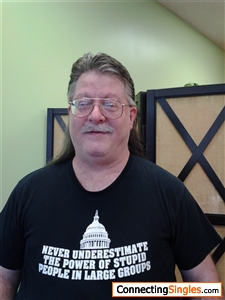 I am 63 years old, 5' 11", currently about 280 lbs, which is an increase in weight due to my knee injury in December 2011. As a result, I ballooned in weight while awaiting my knee surgery. I would love some beautiful and sweet-natured "arm candy" to give me support as I walk through a local shopping mall. I have "graduated" to NO crutches! But I still need to do some walking around in a local mall. I have long brown hair past my shoulder blades. OK, maybe there is more grey than I choose to admit. I have a mustache that is salt and pepper (mostly salt) and I keep it trimmed. I have hazel eyes that peer out to take in this world through glasses.

Also, I have been writing for quite some time. I have never had anything published, except two poems in my high school anthology. But that doesn't prevent me from having a sense of pride in my abilities with the "King's English" on paper. Unlike the tweets of today, I can use my skills to narrow down what I really am trying to say, but that takes more than a few characters (is it 140?). If you are an adventurous female that happens to enjoy reading and writing, then I am not shy about sharing the idea of writing some stories with such an imaginative woman. Or maybe you are a graphic artist who would be able to create descriptive art reflective of the characters in a story that I write?

Having traveled around the world twice via the U.S. Navy as a Hospital Corpsman, I have several life experiences from which to draw impressions and opinions for sharing.

I have a PlayStation 2, 3, and 4, and with the PlayStation 2 able to play PlayStation 1 games, so I can play the entire gambit. So, maybe some online game challenges? But I am not a solid gamer I also have three computers, one strictly for gaming and video streaming, one for photo and video editing, and my "home base" laptop for general usage.

-- Creative spirit through artistic expression from writing, art creation, singing, expressive dancing, or just about anything else that add an additional quality to life beyond the basic day to day survival.

-- Ability to interact through messages with more than just a Twitter-based English.

-- Let's be real and honest - I am very much a proud progressive Democratic minded individual, so if you are a Trump supporter, then we probably should never consider more than a polite Hello while passing on the sidewalk. Women deserve o be treated with dignity and respect, whether they choose to play like a wild child in their private life or if they are the cliché of a very prim and proper Madam Librarian. Women do not deserve to be treated as Trump approaches women. 'Nuff said.

-- Naturally I do prefer a younger woman who is quite physically in shape, but I am not in the best shape myself, so I have no right to be so critical. Besides, if we click in the right way together, maybe we can be good partners with safe and enjoyable weight reducing exercises. Also, I did grow up with a Mother who was quite overweight and I absolutely loved her Angel hugs growing up. So, I am NOT a weight bigot at all. Besides, I learned long ago that attitude about one's own body is far more important than having a lusciously shaped body where physical intimacy within a relationship is concerned.

-- I am not seeking a submissive woman at all. I want a woman who is quite self-confident to politely state her views and opinions if she has a differing thought about what direction we should go as a couple, but still mature enough to know what it means to give and take during those discussions or even fights. Just like it would be my turn to give in during a dispute, she should also be willing to give in some of the time as well in a manner that reflects maturity. In other words, to have the ability to "fight right".

OH! ONE MORE THING! -- You have got to LOVE Rachel Maddow

I chose Associate Degree, because that would be the closest I consider based on the formal military training I received during my years in the Navy.

Unitarian Universalist - look it up online to learn more.

Military retiree - Hospital Corpsman from the Navy - retired in 1995.

science fiction writer progressive Democrat analytical Retired Navy Corpsman
Send a message
Send Flower Report This Profile
Do We Connect? Similar Members
Contact Requirements View All Photos (4)
Back to Top
ConnectingSingles does not do background checks and does not manually screen every profile.
To Report Abuse: If this profile or the behavior of the member is inappropriate, click here to Report Abuse »
EyeLook4U: "Several Hundred Miles And Several Hundred Weeks"(meet us in the poems)