Ramaking: I am a joyful man of 71 years old, journalist and lawyer and dreaming to be a writer . 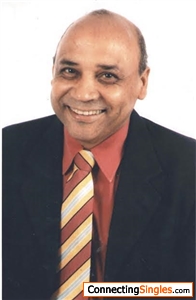 More About Me
I am a tender, educated and joyful man of 71 years old, a separated man living alone in a small flat, at Aparecida de Goiania, in the center of Brazill since 8 years ago. I am a retired journalist .On this context, I am a humble man who receives a small salary paid by the Federal Government which covers only my basic needs. To change my financial condition I am working as a lawyer and trying to sell my paintings in the international market. The basic span life ot a man here is 71 years old but a lawyer here advocated until 106 years old. So, I do intend to follow his example. . .The Hindu scriptures say that deep practice of the Gayatri Mantra increases the life span of a person.. Then, I am engaged in a practice named purascharana which is the repetition of 2 million and 400 thousands Gayatri Mantra to bring enlightnement and longevity.. I am also doing a yoga technique named Tibetan Rites which rejuvenates and brings longevity.. I also do volunteer work ministering Atelier of Leadership based on Human Values approach .and contribute to humanitarian school which takes care of poor children on the outskirt. . On this context, i am working to conclude a Pedagogy Course until the end of this year even with troubles caused by the Corona Virus, in the sequence I do intend to do a Master Degree in Education Course and a Doctorate in Law. . . I am also making efforts t to accomplish an old dreams from youth times which is to be a writer and with focus in Human Values and defense of the environment. . With this purpose, I am working together with my brothers andd sisters to build a family house in a plot land in my native savannah 800km away from here. There, I want to create paintings, to write short stories, novels and poems. based on Human Values and to focus in educational activities near a Kalunga ommunity and to defend the bioma Cerrado in the entrance of the Amazonian Region.

More about my Match
I am a 71 years old man, separated and looking for friendship and penpalship . I want to exchange ideas with a tender, patient, compassionate and,sweet girl or woman from any nationality but with open ideas. The dialogue can be in Portuguese, English, French, Spanish and Esperanto.. .As I retired journalist I do receive only a basic salary paid by the Federal Government which covers only my basic needs. I take a lunch in a State Restaurant where I do pay only a half dollar. But as they serve only a meal by day I do basically fast until my next day meal. That is why I am engaging in advocacy despite my 70 years old. and working to establish my own Lawyer Ofice where I do live. The basic span of life of a man here is until 71 years old .And the majority of the friends from my generation had already departerd from whis world. But one. lawyer here advocated until 106 years old . . So, despite of the dangers of the Corona Virus, I do intend to follow his example . .With this purpose I am engaged in the practic of Vedic Gayatri Mantra which Hindus sages say that it increases longevity and the span of life of the practitioner. So, I am doing a purascharana which is the repetition of 2 million and four thousands of this Vedic mantra. I also . do some yoga exercises named Tibetan Rites which have rejuvenative effects. But . due to my current context of hard financial condition and my advanced age of 71 years old,in a pragmatic and realistic view does not make sense more to look for a relationship since i do not have more the youth power to raise a family.Then, I am looking now only to exercise friendship/ penpalship. And to share my poems with who wants to read them. And, of course, I am making efforts to attain the goals which I already had put in my profile.

Occupation I am retired a journalist and working as lawyer at the age of 71 years old.

4 Photos2 Tags1 Poems1 Poetry
Send a message
Send Flower Report This Profile
Do We Connect? Similar Members
Contact Requirements View All Photos (4)
Back to Top
ConnectingSingles does not do background checks and does not manually screen every profile.
To Report Abuse: If this profile or the behavior of the member is inappropriate, click here to Report Abuse »
Alex7: "Christmas Greetings ... From Where I Am ... "(meet us in the ecards)