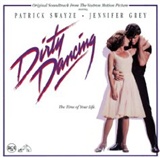 and...yes, I would say that there is nothing more appealing than a man who can really dance!! Patrick Swayze - gone too soon

ally28Dec 15, 2009
love the music love the music
Post Comment - Let others know what you think about this Music

Got some great memories from the film? So do a lot of folks, that's why this soundtrack is one of the most popular and loved.

If film and music fans sometimes wonder why soundtracks are often little more than pastiches of past pop hits and chart flavors of the moment, it's largely due to the blockbuster success of releases like this collection from 1987's surprise Patrcik Swayze/Jennifer Grey romantic hit. The film's retro-romantic concerns came shrewdly wrapped in a (largely manufactured) dance craze conceit tailor-made for such pop chestnuts as the Ronettes' "Be My Baby," the Zodiacs' "Stay," and the Five Satins' "In the Still of the Night." Mickey and Sylvia once again argued that "Love Is Strange"--if not quite as strained as Swayze's own attempt at balladry, "She's Like the Wind." Eric Carmen's "Hungry Eyes" showcased the former Raspberries leader to good effect, but the real soundtrack sweepstakes winner here was the Jennifer Warnes/Bill Medley duet "(I've Had) The Time of My Life." That performance not only won the Best Original Song Oscar the following year, but became one of the era's most performed songs and a ubiquitous radio staple. --Jerry McCulley