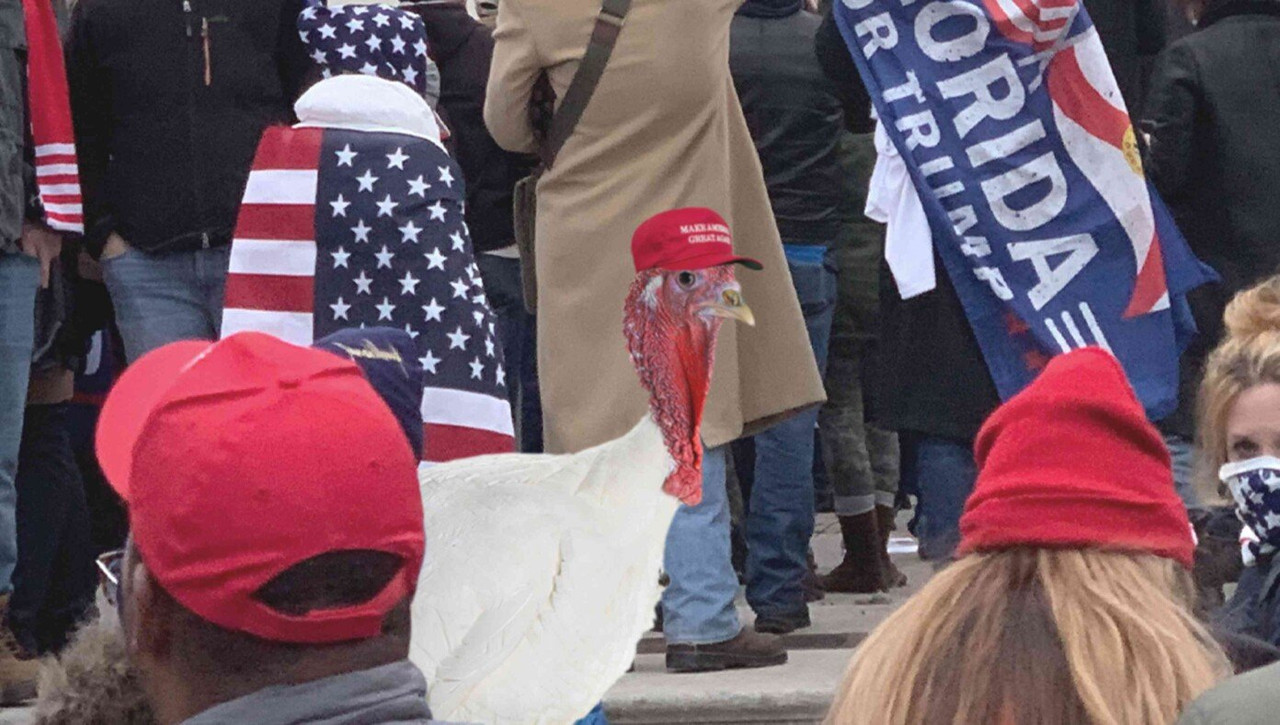 WASHINGTON, D.C. — In a break from a long-standing tradition, the White House announced that this year's Thanksgiving turkey would not receive a ceremonial pardon from President Joe Biden after it was discovered that the turkey had attended the riot at the U.S. Capitol on January 6, 2021.

"The turkey we had chosen for the occasion has been determined to be completely undeserving of a pardon," said White House Press Secretary Karine Jean-Pierre in a media briefing. "The President was very eager to bestow a pardon, but unfortunately, it came to our attention that this turkey participated in the violent attack on the Capitol that attempted to overthrow the government and destroy democracy itself."

The turkey has been returned to police custody.

The Biden administration learned of the scandal after it was presented with photos of the foul fowl wearing a red "Make America Great Again" baseball cap among other Trump supporters and undercover federal agents planted surreptitiously throughout the crowd on the day of the riot. Though other witnesses vehemently argued that the turkey had valiantly attempted to prevent agitators from vandalizing the Capitol and breaching its doors, security camera footage of the MAGA turkey wandering the halls and gobbling in House Speaker Nancy Pelosi's office was considered particularly damning.

"Listen, these dangerous ultra-MAGA birds are a serious threat to our nation, folks," President Biden said in brief remarks about the situation. "They must be dealt with and put in their rightful place, which is on my dinner table. End of speech. Walk away from podium."

At publishing time, all requests made to interview the turkey had been denied. It was reported that the bird was placed in solitary confinement at an undisclosed location as it awaited its execution, brining, and deep-frying without due process.

“Who cares if people starve or go broke—we won’t,”
Bad Axe (Michigan)
Edelweiss - CH I - The ALGORHYTHM [ CXI ]
Have you ever dated…
'Eight is Enough' Star Adam Rich Dead at 54
Dating a dog...
More Blogs
Meet the Author of this Blog

Top 10 reasons to vote Democrat
Astronomers Just Discovered a 'Bear' on Mars
Who ordered 1 cheeseburger, 1 order of french fries, and a large Pepsi ?
Madonna accused of child trafficking
Fox News weatherman Adam Klotz beaten on NYC subway train
R.I.P. David Crosby
Would you dare eat this ?
Rock icon Jeff Beck dead at 78
Biden Declares The Southern Border As Secure As America's Elections
Trump shares EPIC photo of himself as speaker at Biden’s next State of the Union
Uninvited Guests
Liberals on Trump
How Wolves Change Rivers
The Hucklebuck
R.I.P. Pope Emeritus Benedict XVI
What we know now: The CIA and FBI have been corrupt for seventy years
R.I.P. Pele
Ten major revelations exposing extent of government pressure on Big Tech to censor Americans
Study Finds 100% Of Men Would Eat Any Fruit Given To Them By A Naked Woman
Trouble in Journeyland
More Blogs by Willy3411

Create a Blog
Post Comment back to top
Report Blogs that break rules, are offensive, or contain fighting. Staff may not be aware of the Blog Abuse, and cannot do anything about it unless you tell us about it. click to Report Blog Abuse »
If one of the comments is offensive, please report the comment instead (there is a link in each comment to report it).
lovecanbereal: "Evolution"(meet us in the poems)