Sorry I missed a few episodes but (at least) 3 new Donald stories appear in the news each day. Last week, Trump and legal team requested a special master to review the government documents found at Mar-a-Lago. This potentially stalled the process, possibly until after the mid-term elections which could have a significant impact on the voting outcome should he be found guilty of (to put it nicely) doing something illegal.

Anyway, he's suggesting the DOJ pays for the special master. The DOJ disagrees... he's calling for this, he should pay. Don's a great negotiator, (isn't he?) and wants to split the cost with the government.

Reader comments are always entertaining:
"Trump wants the government to pay half so that when he stiffs his part at least the Special Master will get something."

"He asked for it. It should come out of Trump’s pocket and not the taxpayer’s pocket."

"This is really something, trump filed the motion for a special master, now they want help to pay for what they asked for, that like me asking for a new car and wanting the dealership to help me pay for it"

"Why should the taxpayers pay for it? He took documents that didn't belong to him. Besides that, just last week, he was telling everyone that he's a billionaire. If so then let him pay for the special master that he wants."

"It’s not gonna be cheap either MAGAS. So get your checkbooks out because he needs your money to delay his indictment. Also, pay attention to who is cashing your checks. You’re in for a big surprise MAGAS!"

"I sure wish we could in some way redact Trump's entire presidency." 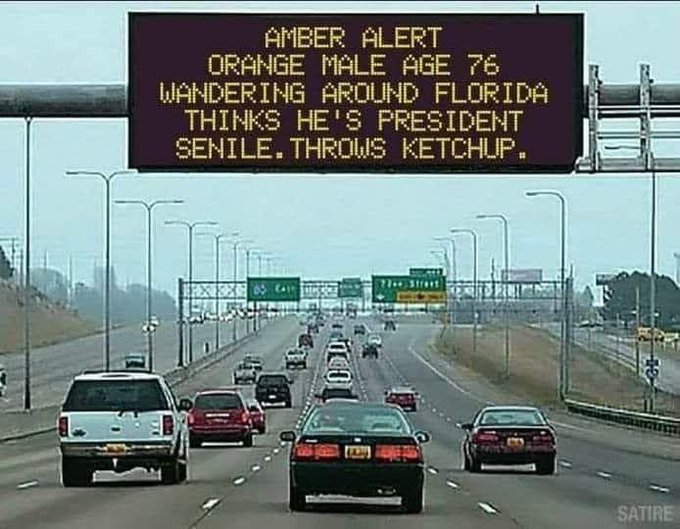 online today!
jac_the_gripper●Tonyrefail, South Glamorgan, Wales UK
Sep 12●1 Blogs●3,532 Comments
#3
After the way he fecked up the protocol when he met her, I think Trump should be invited to Queen's funeral.

He might push his way in front of her and fall in the hole first.
Reply
Report

online now!
Ray650●South San Francisco, California USA
Sep 12●9 Blogs●390 Comments
#4
Could you imagine if Trump was king of England for 70 years, you guys would still be in charge of the world

online today!
chatillionOP●Boca Raton, Florida USA
Sep 12●1,531 Blogs●4,474 Comments
#7
Bassador: Chat, is the Amber alert still active?
No, he traveled out of the immediate area.
The signs are back to 'Click-it or Ticket' buckle up for safety
Reply
Report

online today!
chatillionOP●Boca Raton, Florida USA
Sep 12●1,531 Blogs●4,474 Comments
#8
According to this report, he stopped off in DC.

Hah! The big pond in one single picture ...
Two days of absolute hell are finally over!
Judas the Betrayer is The Lamb of God
Edelweiss - CH I - The ALGORHYTHM [ LXVI ]
If you don't laugh, we can't be friends
Haryanvi ragni...
More Blogs
Meet the Author of this Blog

The $10 toaster...
Art Basel...
Pretty worn-out for 34...
Running for senator in a state you don't live in...
If you don't like SAX...
If you knew Andi...
The MUSK phone...
Con-Ye...
How many Sharon's does it take to fill a dating site?
Irene Cara R.I.P.
Do you remember me?
Your daily dose of Donald... Thanksgiving Edition!
The truth about TRUTH...
The kindergarten flight...
Coming to you LIVE from Dayton, Ohio...
Amateur Radio aka ham radio...
Sold by wait...
I eat too fast...
Saying goodbye to the Deauville Hotel...
The 'Red Wave' turned out purple...
More Blogs by chatillion

Create a Blog
Post Comment back to top
Report Blogs that break rules, are offensive, or contain fighting. Staff may not be aware of the Blog Abuse, and cannot do anything about it unless you tell us about it. click to Report Blog Abuse »
If one of the comments is offensive, please report the comment instead (there is a link in each comment to report it).
Hans4711: "Scene 31"(meet us in the puzzles)