Green Iguanas aren't indigenous to Florida. They were brought to Florida on ships from Central and South America that carried fruits. Often thought their presence was good, they soon found out the Iguanas became a nuisance. They cause damage to plants with flowers, foliage, or any kind of vegetables and they destroy them. Moreover, iguanas burrow deep holes in the soil that can damage the infrastructure of sea walls, sidewalks and drainage canals.

Florida Wildlife Commission (FWC) deems them an invasive species and are NOT protected. There are services available for Iguana removal and no license is required to kill them as long as it done in a swift humanely manner.

Often, they become road kill when they get in the way of oncoming vehicles. That was the case this morning when I was leaving a project in a community surrounded by dense foliage. When they are hanging in trees and moving about they appear to be really slow... however they are extremely quick to run and can disappear in a heartbeat when provoked.

This one committed suicide and there was no way I could have avoided hitting him. It felt like I struck a 4 inch thick tree branch. The cars behind me had to steer around to miss him.

NOTE: The photo below is for visual reference to the variety that inhabit South Florida.
IT'S NOT A PHOTO OF THE ACTUAL IGUANA IN MY BLOG. 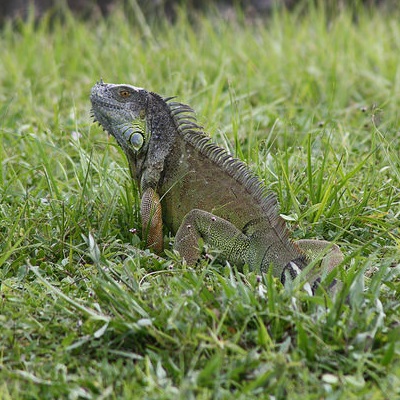 Lukeon●Port Elizabeth 6000, Eastern Cape South Africa
Sep 2●464 Blogs●8,203 Comments
#1
They should put a bounty out on them and rid Florida of these pests once and for all.

$100 paid for every Green Iguana tail-tip handed in at any Florida police station.

online today!
chatillionOP●Boca Raton, Florida USA
Sep 2●1,533 Blogs●4,481 Comments
#2
Every once in a while they declare Iguana season. I doubt money is paid for the roundup.

I read that Iguana meat is edible, but they carry the same diseases as eating crocodiles and snakes.

online today!
Bluekiwi●Te apua, Northland New Zealand
Sep 6●12 Blogs●113 Comments
#3
So you stopped to take a photo THEN ran it over ?

Where is the "after" photo ,and did you not consider it dangerous to stop on the freeway.
No wonder the car behind had to take evasive action

Like a thief in the night
Better to be pissed off than to be pissed on?
Finally! My cranky old bugger gets fixed…I hope
Edelweiss - CH I - The ALGORHYTHM [ LXVI ]
How much are you worth?
TRUMP CALLS FOR TERMINATION OF CONSTITUTION!!!!
More Blogs
Meet the Author of this Blog

Create a Blog
Post Comment back to top
Report Blogs that break rules, are offensive, or contain fighting. Staff may not be aware of the Blog Abuse, and cannot do anything about it unless you tell us about it. click to Report Blog Abuse »
If one of the comments is offensive, please report the comment instead (there is a link in each comment to report it).
"PLAY NOW: Spot the Difference II"(meet us in the games)