My dislike for the FUZZ...

There are a few different stories over the years of how the invention to the distorted guitar sound called 'fuzz tone' came about. I'll go with Nashville studio engineer Glenn Snoddy's accidental invention Maestro Fuzz-Tone manufactured by (the guitar company) Gibson.

When guitar amplifiers were invented, it was typically low wattage (around 3 to 5 watts) using electron tubes (called valves in England) and small speakers. As guitarists began to play larger venues, they required bigger amplifiers. Jazz and Country Western music relied on a bright clean sound. If you were playing Rock & Roll, the desire for more volume often pushed the tubes beyond their wattage capacity of creating their natural ability to reproduce the incoming signal. When checking this on an oscilloscope, what would normally be a smooth sine-wave shape, would flatten the tops of the sine-wave.
Usually the circuits were based on a push-pull design with 2 tubes in unison. If they were capable of 10 watts each, the total output would be 20 watts. As you increase the volume, the clarity of the notes would disappear and a harsh sound would be created.
This coloration of sound actually became popular in the 1960's and if your amplifier didn't get 'dirty enough' I've hear stories where guitarists would use screwdrivers and poke holes into their speakers and crank the volume up to get their signature sound.

Eric Clapton playing with John Mayall and the Bluesbreakers was notoriously disliked by the recording engineers. His studio volume was so much that it was getting into the mix of the other instruments. He wanted a sustain that could only come about from over-driving his gear. They had to put barriers and blankets around his amp to control the volume in the studio.

Who used a fuzz-tone? Nearly every electric guitarist on the planet. Since the device had controls for saturation and volume, every guitarist could dial in their very own sound and be the same as each other. 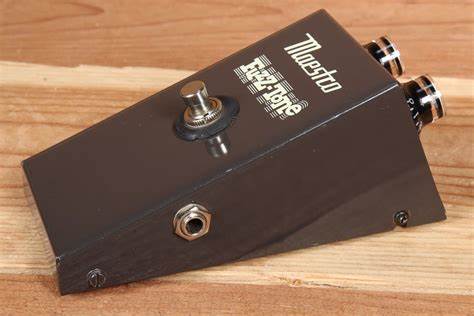 60 years later, there are several dozen versions of the fuzz-tone. Some change your tonal settings, some add reverb, some add tremolo, some have deeper and more distorted selections. It's mind-boggling the endless combinations.

I listed to a video today demonstrating some different models.
The guy doing the video is the owner and inventor for JHS Pedals. He goes through various sounds and can give advice to who used what fuzz so you can cut through the BS and purchase the same one that your guitar hero uses.

I'm not saying I dislike the sounds of Hendrix, Stevie Ray Vaughn, Bonamassa, I don't like listening to some ultra distorted metal bands where there is no clarity in their sound.
Post Comment

US official: Russian missiles crossed into Poland, killing 2
Slowly making plans for my future.
Horrifying scene when driver plows into 75 sheriff recruits in California
Very good night for the Republicans so far
I ran into a very successful classmate one day at lunch, a thai restaurant
Listen to Trump announcement tonight 9:00 PM Eastern
More Blogs
Meet the Author of this Blog

Create a Blog
Post Comment back to top
Report Blogs that break rules, are offensive, or contain fighting. Staff may not be aware of the Blog Abuse, and cannot do anything about it unless you tell us about it. click to Report Blog Abuse »
If one of the comments is offensive, please report the comment instead (there is a link in each comment to report it).
ManFromMars: "Good Mood Music"(meet us in the top 10 lists)